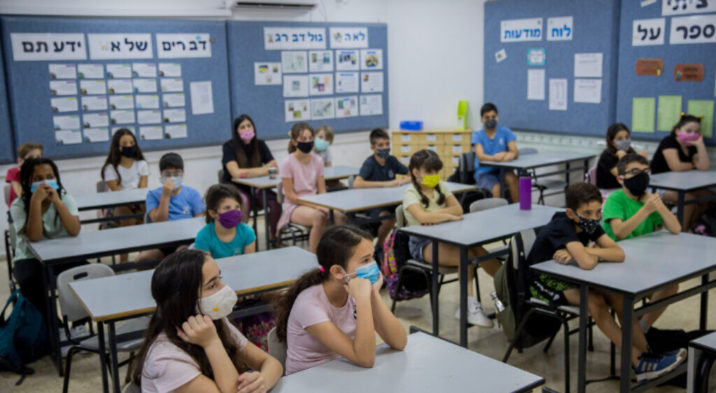 AS per a real-time, eyewitness account, as well as stated for the record: this writer happened to be in attendance at a local elementary school in Israel — an invited guest by her significant other, since his granddaughter starred in a year-end play. So sweet.

WELL, in the midst of the fun-filled festivities, this bunch of otherwise raucous first-graders stood at rapt attention, that is, when the principal intoned — in a most “hop-to-it” voice — over the school loudspeaker: she has a very important and exciting announcement to make!

SUFFICE to say: the aforementioned kiddies had the very same reaction as the following bunch….beyond jubilant. Very likely, this scenario repeated itself throughout classroom after classroom….

BTW, while Hebrew is a second language for this writer, there is no language requirement to understand the linked video — it crosses all barriers!!

Watch the moment a teacher told her pupils they could remove their masks for good.

The overjoyed children simultaneously rip their masks off, with some tearing them to pieces while others throw them up in the air in jubilation.

The moment the teacher tells her pupils that as of now no more masks are required in the State of Israel.

Israel’s Health Ministry reportedly said its Director-General Hezi Levi had signed the change in the rules cancelling the obligation to wear a mask from Tuesday.

However, there are still exceptions; the mask change won’t apply to prolonged hospitalization and elderly institutions regarding non-vaccinated or non-recovered people, as well as passengers on flights.

Meanwhile, mask mandates remain enforced in many schools across America despite the dropping infection rates and availability of experimental vaccines.

Owen reacts to the recent Ami Horowitz man on the street video where liberals are asked why they still wear their masks outside after being vaccinated.