FROM the get-go, let it be stated for the record: A freedom-based society should never, ever censor speech or so-called art, regardless of its offensive nature – that is, unless said speech explicitly {emphasis added} calls for violence and physical harm to others. Otherwise, it should be deemed: Hand’s-off!

AT its core, a nation can’t claim to be free, then, at will, turn around and censor this and that. Besides, said picking and choosing amounts to: Freedom for thee– but not for me. Vice versa. Not only that, the same also applies to the silencing of Holocaust deniers and their ilk, or the related expressions of support thereof. This is so, despite having lost many family members to Hitler’s murderous onslaught and extermination camps. Acutely, censoring horrific depictions of Jews – for the most part, ala blood libel messaging – can’t be exempt. Inexorably, the slippery slope….

THAT being front and center, while the offensive nature of the following “art” elicited a nauseous impact at this end (as have others, similarly depicted over the years) and is beyond the pale, nonetheless, censoring it should be off the table.

A student at the University of Southern Maine has created a sick Satanic art display deliberately desecrating the Bible that has Christians expressing outrage.

The “art” piece was created by Riley Harris for a class assignment. The intent, CBN reports, was to “transform a book into something new.”

So this Riley chose The Good Book.

He explains that the piece is called “Unholy Bible: Very Revised Standard Edition.” It reflects the head of Christ covered with a satanic image and includes torn pages from the Bible.

“He actually ripped pages out of the Bible and painted them to look like flames from the lake of fire. Then he took portraits and paintings and Christ and in place of the face of Jesus he placed a satanic image. You can actually see the nativity scene with Mary cradling the Christ child and there is an evil satanic face on the Christ child,” Starnes said.

The self-professing atheist says the purpose of his exhibit is to “question authority.”

“I was thinking a lot about questioning authority in general,” Harris said. “People question different types of authority, but for some reason, religious authority seems too taboo to question, so I thought I would give it a shot”…….

According to CentralMaine.com, the exhibit is on display in a building on campus utilized by community groups and church members.

Unsurprisingly, the university supports the student and affirms that Harris is not violating any rules.

“The university supports freedom of speech rights for all students, affirmed and upheld by Board of Trustee System Policy 212,” the school said in a statement.

The policy reads, “The Board of Trustees is committed to protecting the rights all University community members share to free speech, which includes free expression and assembly.”

Flynn says this art piece has nothing to do with freedom of speech.

“If I saw a Koran with pig blood on it I would certainly call someone or a Torah with unclean foods on it,” he said. “This is a Bible with Satan’s image put over Jesus’ image and around Christmastime.”

OFFENSIVENESS aside (again, its outrageous depiction is not in question), it is imperative for onlookers not to miss the forest for the trees, so to speak.

INTRINSICALLY, countless are aware what happens when Islam, heaven forfend, is the object of what Muslims and their leftist enablers consider not only offensive and outside the limits but blasphemous! Imagine that. It is as if Islamic laws surrounding blasphemy have any legal (or moral) standing in the U.S., or, for that matter, in the wider west. Hell no. 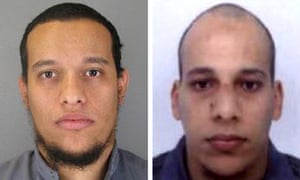 On January 7, 2015, three Islamic militants with Kalashnikov rifles attacked the Paris offices of the satirical newspaper Charlie Hebdo, leaving 12 people dead, including eight cartoonists. On January 11th, a video surfaced of Amedy Coulibaly, one of the Hebdo gunman, pledging his allegiance to ISIS. Islamic State flags were discovered in his apartment, as well.

The two brothers with whom Coulibaly carried out the attack, however, had declared their loyalty to a rival group, known as Al Qaeda in the Arabian Peninsula.

Kouachi referred to himself and his brother as defenders of the Prophet Muhammad and said that he had been sent by al-Qaeda in the Arabian Peninsula (AQAP). The brothers told police negotiators that they were ready to die as martyrs, and just before 5:00 PM they emerged from the building and were killed in the ensuing shoot-out.

AS is known, countless westerners have been killed for said “crime”, Charlie Hebdo-like.

MEANWHILE, others have been threatened or marked for death – all for daring to criticize Islam or its madman, “prophet” Muhammad, in any verbal or visual realm, let alone via cartoon-mocking imagery. Yes, the following FB pic of yours truly was circulated online ala a non-veiled warning: STFU re Islam and Muhammad – or else!

AS it happens, its digital footprints were tracked down by counter-terrorism contacts. Two addresses were found to be most prominent, namely, Iranian jihadis (incidentally, they were part of an assemblage of the Revolutionary Guards, IRGC), as well as their equally outraged and offended Sunni Brotherhood Mafia counterparts, in Turkey. Indeed, a more than proof positive illustration of Shia and Sunni working cooperatively, albeit taking one (of many) breather from their centuries-long enmity to target the infidel enemy! Hmm.

MORE glaringly, who recalls the fatwa on Pamela Geller’s head, and the unfathomable “stand down” from the Islamic-captured FBI and attendant security agencies? Well, aside from the explanatory video, the following trail is more than proof of the same:

ALAS, lo and behold, the ever prostrating Washington Post found the onslaught against satirists/cartoonists a hard pill to swallow. Still yet, true to form, in a not too subtle jab, the so-called reporter opined “understanding” for the alleged attacks – had it been others who were targeted! Chicken-sh*t appeaser. Of course, had the scribbler stated the real truth behind the onslaught, that is, it’s Islam, dear reader, well, that would have been the news-maker. Headliner.

At least 12 people have been killed after gunmen stormed the offices of Charlie Hebdo, a French satirical newspaper, in Paris on Wednesday. President Francois Hollande has called the attack a “terrorist attack without a doubt” and early indications point to it being carried out by Islamist extremists.

The attack is horrifying no matter what way you look at it, but it’s almost bewildering when you consider the target. The attackers weren’t fighting the French state. They weren’t killing soldiers and appear to have only incidentally killed policemen. They weren’t even attacking a far-right group that pushes an anti-Islam line.

Instead, they were targeting satirists and cartoonists, such as the newspaper’s editor, Stéphane Charbonnier, and Jean Cabut, better known as Cabu. The terrorists wanted to kill people who make drawings for a living.

Stranger still, that doesn’t even seem that unusual. Charlie Hebdo had been targeted before. In 2012, its offices were firebombed and its Web site was hacked. While no one was harmed, the perpetrators were never caught. It was widely assumed that the attacks were committed by extremist Islamists.

In each case, the threats stemmed from controversial depictions of the Muslim prophet Muhammad. Graphic depictions of the prophet are considered taboo by many Muslims, in particular Sunni Muslims, largely because they could be considered a form of idolatry (similar traditions have existed in a number of faiths). Blasphemy against the prophet is a considered a crime (sabb al-nabi), though religious teaching on how it should be punished varies widely: As noted in “Muhammad in History, Thought, and Culture: An Encyclopedia of the Prophet of God,” Koranic verses can be interpreted to suggest that any punishment should be meted out by God, not by humans.

Depictions of Muhammad by non-Muslims have caused offense for centuries, whether in Dante’s “Divine Comedy” (where the Islamic prophet is depicted in hell), or in a statue of Muhammad that had stood on the roof of New York City’s State Appellate Division courthouse for 50 years (it was removed in 1955 after protests from Islamic countries, though a depiction in the U.S. Supreme Court in Washington remains). In 1977, a film about the life of Muhammad titled “The Message” attempted to avoid the problem by never actually showing the prophet. It didn’t work: After Islamic groups took hostages in a Washington siege that left two dead, the filmmakers canceled the Washington premiere and halted screenings.

YES, continue reading the Post’s degrading apologia here……as if the real onus lies upon the “non-restraint” of westerners – those who refuse to prostrate to the Islamic laws of blasphemy!

CONCRETELY, the real conundrums remain two-fold: Firstly, why was anyone shocked by the murderous attack on satirists in the offices of Charlie Hedbo, after all, it happened before – and then some? Secondly, by now, isn’t it obvious that devotees to Islam, Muhammadans, are still stuck in a 7th century-steeped barbaric ideology, whereby the spread of Islam was (and still is) by the sword? Incontestably, it was through onslaught after onslaught that the Muslim conquests began – with Muhammad leading the bloody charge with the unification of Arabia, in 622. Yes, that long ago. And that mindset prevails today.

SANS a scintilla of a doubt, for America (the west at large) to remain free, no one – not even the governmental powers that be – should have any say as to what is “acceptable” discourse, regardless of the forum. As such, the following is offered as more than food for thought for those who wish to remain unchained: “Islamic Blasphemy Laws & The Silencing of Free Speech Via The Red-Green Axis: The Parallels. The Dangers.“