WHILE most Americans (westerners alike) believe that Jihadi terror commenced on September 11, 2001, that would be wrong. In reality, the ‘opening shot of Jihad’ on United States soil made its official debut on November 5, 1990, with the very brazen public assassination of Rabbi Meir Kahane at the New York Marriott East Side Hotel in Manhattan. In fact, its basis was revealed at this expert’s expose’ at Israel National News (in 2005). Effectively, almost 30 years onward, Mohammedans are calling the shots in America, with the ‘end game’ being the imposition of Shariah Law. This is so, irrespective of time and place – however long it takes.

THEN as now, this site pulls no punches. So, on May 31, 2014, the following was attested to – as per the inherent dangers from Islam, that is, Sharia Law. Irrefutable, regardless of any discomfit.

Let’s be clear from the get go: Agreed, Islam has been around for centuries and it is nauseatingly deemed one of the three “great” religions, regardless of its barbarity. Get over it. In any event, it is time to cease pandering to its “hallowed” status and to commence telling the truth, otherwise the west will be destroyed. Simple as that.

In reality, it has never stopped its war-like thrust. On the other hand, its catapult has never been more obvious. Ensured. Additionally, don’t become (mentally) entrapped into believing that to “wage war” against Islam is akin to any form of bias against individual Muslims. It is not.

Assuredly, the west’s struggle is against a totalitarian political ideology. Hence, it must be re-focused against a politically fascist and religious cloaked doctrine which has, from time immemorial, targeted western infidels, many of whom are also apostates from Islam. Essentially, “pure” Islam dictates who lives and who dies. Period.

In fact, Winston Churchill presciently noted the following observations and his predictive words are as true today as they were when he uttered them.They are absolutely historically accurate. Beyond dispute.

Individual Moslems may show splendid qualities, but the influence of the religion
paralyzes the social development of those who follow it.  No stronger retrograde
force exists in the world.  Far from being moribund, Mohammedanism is a militant
and proselytizing faith.  It has already spread throughout Central Africa, raising
fearless warriors at every step, and were it not that Christianity is sheltered in the
strong arms of science, the science against which it (Islam) has vainly struggled,
the civilization of modern Europe might fall, as fell the civilization of ancient Rome.” ……. continue reading the unvarnished truth-telling here…..

ALAS, after decades of Jihadi terror within America (and the west at large, never mind its continuous carnage inside Israel, the western outpost within the Islamic-driven, barbaric-laced Middle East), let’s face facts: (political) Islam’s infiltration and penetration has not been tamped down, rather, it has made great strides in every sphere of national influence. Of course, much of its thrust has been facilitated by the out-sized influence of CAIR (the Muslim Brotherhood Mafia’s/Hamas’s propaganda arm in North America), a designated ‘unindicted’ co-conspirator in the 2008 trial of the Holy Land Foundation For Relief and Development (headquartered in Richardson, Texas) during the largest terror trial in U.S. history. What’s going on? How can this be?

TO wit, with nary a smattering of cards on the table, some of which are displayed above, it is imperative to play catch-up with more recent developments, albeit, they are hardly exhaustive in nature.

BUT to be truthful and totally above board, it is not as if Americans (and westerners at large) haven’t been given ample warning, and in countless ways. Straight from the horse’s mouth too.

Muslim to Christians about threat of radical Islam: ‘We tried warning you’ — Video

STILL yet, if you can’t wrap your (western) freedom-based mind around the left’s support of Reps Omar & Tlaib, full-throated Islamists, ala two-steps, back-shuffles, and jive-talk – as evidenced via “Why Would ISIS Praise Reps Omar, Tlaib, & ‘AOC?” – stop scratching your head. Simply, what must be front and center is the axiom: ‘the enemy of my enemy is my friend.’ Yes, both harbor extreme anti-American/western animus and that is that!

AND this is precisely why the ‘normalizing’ of Islamism has crept into the Socialist- Democratic body politic, and every sphere of influence in between. Not only that, atop all of Omar’s (and Tlaib’s) anti-semitic and anti-American rants and support of Jihadists, you know, when she attempted to win leniency for 9 men accused of trying to join ISIS, how much clearer does it have to be, that is, to admit that Shariah Law enforcers have penetrated the very heart of Congress? And the very fact that Omar spewed the most inciting venom of all, namely, “America was founded on the history of Native American genocide, on the backs of black slaves. This is not going to be the country of white people”, and Pelosi & gang still have her back, well, that about sums up the cementing of the red/green alliance within the epicenter of American politics. Agreed?

MOST significantly, is it any wonder that Omar (along with Tlaib, ‘AOC’, and their entire anti Judeo-Christian cabal) feels empowered enough to continue spewing her venom via the following:

“Religious fundamentalists are currently trying to manipulate state laws in order to impose their beliefs on an entire society.”

The new laws are efforts “to criminalize women for simply existing, to punish us when we don’t conform to their attempts to control us.”

“But because it’s happening here, with the support of the ultra-conservative religious right, we call it religious freedom,” she said.

“I am frustrated every single time I hear people speaking about their faith,” said Omar.

MIND you, as she vomits out her anti-Christian and anti-Jewish bile, she does so while wearing her hijab in Congress – due to a change in the rules governing non-head coverings – in order to accommodate her attachment to fundamentalist Islam! Did you ever?? What utter chutzpah too. Indubitably, CAIR (with Brotherhood Mafia groups in tow, in league with their leftist hench-people) exerted the political muscle to change a heretofore ‘set in stone’ rule. Hmm.

BUT above all else, what matters most is the underlying supremacist ideology of Islam – that which is Shariah law prescribed to subjugate humankind to Islam, no ifs, ands, or buts. However long it takes. 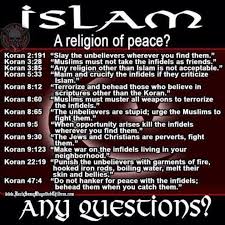 5 thoughts on “Shariah Enforcers Penetrate America + Terrorists Adjudicated As ‘Criminals’ – Wherein Lie The Dangers? How Did This Happen? Commentary By Adina Kutnicki”