IN tandem with the crooked appendages of Clinton, Inc., Obama Inc. has subverted America’s democratic process to the nth degree. So much so, its last vestiges are hanging by a thread. Barely.

STILL yet, prior to moving forward to the latest development(s), it is intrinsic to recognize that the aforementioned wrecking balls could not have transpired without the heavy-lifting of countless co-conspirators; those who operate inside and outside officialdom. Incontestably, whether or not they aid and abet through outside channels, they are every bit as culpable as their counterparts who operate from deep within the bowels of Capitol Hill. The beltway.

BUT before the evidentiary putsch against the democratic election of President Trump via Obama Inc. (never mind that his two-term tenure has, blessedly, come and gone) becomes that much more indicting, a recap is mandatory due diligence. Resultant, the following backgrounder into the subversive nature of Brennan, HUSSEIN’s CIA henchman, requires another airing.

AS this site reported from its inception:

ATOP the above spook-ridden trails, HUSSEIN’s leftist and pro-Islam politicization of the nation’s domestic security arms, the FBI and DOJ –  up and down the top chains of command – became “captured” agencies and ensured the following outcome: whatever the result of the 2016 election, Obama Inc.’s anti-American agenda would continue apace ala its “shadow government.” Of course, this necessitated a collusion of ready, set, go trumped-up charges, that is, against the out-sized possibility of a Trump win. Yes, the infamous “insurance policy!”

As Special Counsel Robert Mueller’s investigation into Russian influence in the 2016 election continues, two former members of his team are under scrutiny for text messages they exchanged about President Trump and the probe.

In the messages, Peter Strzok and Lisa Page, who were romantically involved, bashed Trump and discussed concerns about being too tough on Hillary Clinton during an investigation into the use of her private email server. The pair exchanged some 50,000 text messages throughout the presidential election and first year of the Trump administration, many of them with anti-Trump sentiments.

GOP congressional investigators have alleged that more uncovered text messages between Strzok and Page may show a possible coordination between high-ranking officials in the Obama administration, CIA, FBI, Justice Department and former Senate Democratic leadership in the early stages of the Russia investigation.

The investigators say the information provided to Fox News “strongly” suggests coordination between former President Barack Obama’s chief of staff Denis McDonough, then-Senate Democratic Leader Harry Reid and former CIA Director John Brennan — which they say would “contradict” the past administration’s public stance about its hand in the process.

Other text messages show an allegiance for fired FBI Director James Comey. Page said, in one message, that she had wanted to “see what the FBI could become under him.”

Peter Strzok is a veteran counterintelligence agent who was assigned to both the investigation into Clinton’s personal email server and Muller’s probe into possible collusion between Trump officials and Russians during the election.

Strzok was removed from the Russia investigation after it was revealed that he exchanged anti-Trump text messages with Lisa Page, a senior FBI lawyer.

ABC first reported that Strzok left the probe and was reassigned to the human resources division in August 2017.

According to the text messages, Strzok was hesitant to join Mueller’s investigation because of his “gut sense” that there was “no big there there.”

Strzok previously worked on investigations pertaining to Chinese and Russian espionage, according to The New York Times.

A lawyer for the FBI, Lisa Page was only temporarily on Mueller’s team, but she discussed the investigation with Strzok.

Page warned Strzok via text about the FBI’s investigation into Clinton’s use of a private email server during her tenure as secretary of state, saying in February 2016 that she “might be our next president.”

“The last thing you need [is] going in there loaded for bear,” Page continued. “You think she’s going to remember or care that it was more [DOJ] than [FBI]?”

Page and Strzok also discussed preparing talking points for then-FBI Director James Comey to give to President Barack Obama because he wanted “to know everything we’re doing,” she said.

Page, who has “deep experience [in] money laundering and organized crime cases,” was removed from the investigation in September 2017.

A controversial figure at the FBI, deputy director Andrew McCabe was seemingly referenced by Page and Strzok in their text messages.

“I want to believe the path you threw out for consideration in Andy’s office – that there’s no way he gets elected – but I’m afraid we can’t take that risk,” Strzok texted on Aug. 15, 2016. “It’s like an insurance policy in the unlikely event you die before you’re 40.” …..continue reading…..

ALAS, is anyone in their right (no pun intended) mind shocked by the latest developments, reported by the ever reliable Gateway Pundit? Rhetorical.

Kimberly Strassel lit DC ablaze on Thursday after she dropped a bombshell in a Wall Street Journal article titled, “About That FBI Source.”

Thanks to the Washington Post’s unnamed law-enforcement leakers, we know Mr. Nunes’s request deals with a “top secret intelligence source” of the FBI and CIA, who is a U.S. citizen and who was involved in the Russia collusion probe. When government agencies refer to sources, they mean people who appear to be average citizens but use their profession or contacts to spy for the agency. Ergo, we might take this to mean that the FBI secretly had a person on the payroll who used his or her non-FBI credentials to interact in some capacity with the Trump campaign.

Everybody wants to know who this plant was and who he was funneling information to inside various government agencies.

Investigative reporter for The New York Post, Paul Sperry says in the summer of 2016, former CIA Director John Brennan, through his FBI liaison, Peter Strzok, with the help of former Secretary of State John Kerry were trying to set Russian espionage traps for minor players in the Trump camp.

Sperry tweeted: DEVELOPING: A major new front is opening in the political espionage scandal. In summer 2016, Brennan with his FBI liaison Strzok, along with help from Kerry @ State, were trying to set Russian espionage traps for minor players in the Trump campaign through cultivated intel assets

DEVELOPING: A major new front is opening in the political espionage scandal. In summer 2016, Brennan with his FBI liaison Strzok, along with help from Kerry @ State, were trying to set Russian espionage traps for minor players in the Trump campaign through cultivated intel assets

Paul Sperry also pointed out this interesting piece of information:

“He has been exposed as a CIA and M-16 spy behind the FBI Russiagate investigations of the Trump Campaign and is an informant to the Mueller Special Prosecutor investigation.”https://en.wikipedia.org/wiki/Stefan_Halper …

Since it was removed, here are the screenshots: 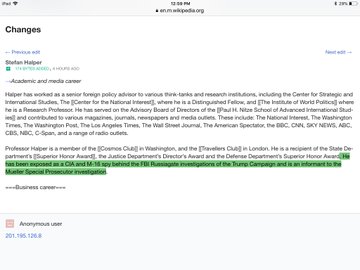 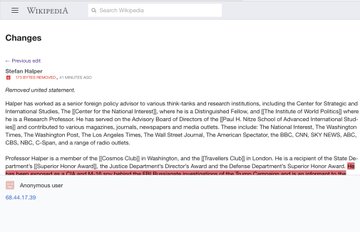 Good catch! It’s already been removed. Here are the screenshots.

Here’s what we know about John Kerry’s involvement with Hillary’s phony Russia dossier so far:

According to a March report by investigative reporter, Sara Carter, John Kerry was officially under investigation by the House Intel Committee for his “possible role” in the Steele dossier.

The House Select Committee on Intelligence is now investigating former Secretary of State John F. Kerry’s possible role into the unverified dossier paid for by the Democratic National Committee and Hillary Clinton Campaign, this reporter has learned. The dossier, assembled by a former British spy, laid the foundation for the FBI’s investigation into alleged collusion between President Trump and Russia and was the essential piece of evidence used by the FBI to get a warrant to spy on a former volunteer for the Trump campaign.

Chairman Nunes is also investigating whether former CIA Director John Brennan perjured himself in a public testimony about the dossier.

In his May 2017 testimony before the intelligence panel, Brennan emphatically denied the dossier factored into the intelligence community’s publicly released conclusion last year that Russia meddled in the 2016 election “to help Trump’s chances of victory.”

Brennan also swore that he did not know who commissioned the anti-Trump research document (excerpt here), even though senior national security and counterintelligence officials at the Justice Department and FBI knew the previous year that the dossier was funded by the Hillary Clinton campaign.

Peter Strzok was removed from Mueller’s team after anti-Trump text messages were discovered by the Inspector General.

Strzok also teamed up with McCabe to ambush General Flynn in a surprise FBI interview which led to his firing; Flynn then pleaded guilty for lying to the FBI.

Rumors are flying and a few names are being thrown around about who this possible FBI plant may be, but once it’s revealed, all hell is going to break loose. This is a HUGE development.

No wonder why Rosenstein is fiercely working to keep documents from the House Intel Committee and House Oversight Committee.

CONCLUSIVELY, with HUSSEIN and Hill in the lead, the entire cadre of “deep state” co-conspirators must be marched into adjoining prison cells –  wholly supportable under numerous Constitutional-based legal bulwarks!!

9 thoughts on “Obama Inc.’s “Deep State” Fingerprints Caught In Trumped-up Russian Espionage: Will They Be Charged? Commentary By Adina Kutnicki”