LIKE it or not, the moment that “Allah’s (White House) Muslim Terrorist” ceded America’s status as the west’s hyper-power, it became the moment in time that jihad imploded all over the world.

NOW, this is hardly to suggest that Islamic jihad hasn’t been around for decades, that would be crazy talk. Mind you, as steeped as this investigative journalist is in this arena, reminders aren’t required as to what’s up. Besides, 9/11/01 surely happened before HUSSEIN Obama took over the reins. However, the fact of the matter is – whatever mistakes were made, they are too lengthy to enumerate – up until he took over, no American leader gave the kind of free rein to Islamic jihad, like the enemy squatting in the People’s House. This site challenges anyone to argue otherwise.

THAT being established, one can then begin to connect certain dots, especially those which bear witness to the horrific situation America finds herself in, as well as the west at large.

The President personally issued Presidential Study Directive 11 (PSD-11) in 2010, ordering an assessment of the Muslim Brotherhood and other “political Islamist” movements, including the ruling AKP in Turkey, ultimately concluding that the United States should shift from its longstanding policy of supporting “stability” in the Middle East and North Africa (that is, support for “stable regimes” even if they were authoritarian), to a policy of backing “moderate” Islamic political movements.

To this day, PSD-11 remains classified, in part because it reveals an embarrassingly naïve and uninformed view of trends in the Middle East and North Africa (Mena) region.

The revelations were made by Al Hewar centre in Washington, DC, which obtained the documents in question.

Through an ongoing Freedom of Information Act (FOIA) lawsuit, thousands of pages of documentation of the US State Department’s dealings with the Muslim Brotherhood are in the process of being declassified and released to the public.

A State Department Cable classified “Confidential” report says the following: “Benghazi Meeting With Libyan Muslim Brotherhood: On April 2 [2012] Mission Benghazi met with a senior member of the Muslim Brotherhood steering committee, who will speak at the April 5 Carnegie Endowment `Islamist in Power’ conference in Washington, D.C.

Another State Department paper marked “Sensitive But Unclassified (SBU)” contained talking points for Deputy Secretary of State William Burns’ scheduled July 14, 2012 meeting with Mohammad Sawan, the Muslim Brotherhood leader who was also head of the Brotherhood’s Justice and Construction Party. The document is heavily redacted, but nevertheless provides clear indication of Washington’s sympathies for the emergence of the Muslim Brotherhood as a major political force in the post-Gaddafi Libya

The story is from the Gulf News, which operates out of the Anti-Brotherhood UAE. Al-Hewar, which actually got hold of the documents, is linked to the International Institute of Islamic Thought… which is a Muslim Brotherhood front group.

Figures in the Muslim Brotherhood had threatened to leak understandings with Obama Inc. This is the next best thing. It warns Obama that if he tries to forget about them, they can prove that the relationship was official policy.

ALONG this trajectory, let’s get certain facts straight: HUSSEIN Obama entered into an illegal war in Libya – by not receiving Congress’s consent through the War Powers Resolution Act – and his illegal bypass was not for nothing! As such, recognize this too: the invasion was pre-planned, “koshered”, via Samantha Powers and her R2P (“Responsibility To Protect”…Orwellian) scheming. Its basis had everything to do with the Muslim Brotherhood’s swathe to power, as well as HUSSEIN Obama’s outlined plans with his Islamist partners to set in motion the rise of the Islamic (Caliphate) State!

While the United States and its allies are focused on Syria and Iraq, IS (commonly referred to as ISIL or ISIS) has its eyes beyond that fight. The Islamic State group has set up training camps in eastern Libya.

The report, titled The Islamic State’s Expansion in Libya, says Libya’s ex-ambassador to the Emirates Aref Ali Nayed is worried that if Washington does not act, IS will use Libya to threaten Europe.

The IS has increased its physical and media presence in the last three months. A local terrorist organization, the Islamic Youth Shura Council (IYSC), has pledged its loyalty to IS.

Adding to concerns, IS is winning the battle to be the dominant terrorist group in the region, just as it is in Iraq and Syria. Al-Barqawi has said that the terrorist organization would like to remove the borders of North African countries Tunisia, Libya, and Egypt to form a province similar to the one they are building in Syria and Iraq, which they call the “Euphrates Province.”

Because of the priority western allies have put on Iraq and Syria, Engel said that the biggest challenge for countering IS in Libya is finding the “resources and will to organize a strategy and partners.”

HEY, the Pyromaniac-in-Chief is surely giving himself due props, for setting Libya alight for the Brotherhood’s Islamic State!

NEVERTHELESS, jihadists are not just making gains in N. Africa and the Mid East. Far from it. America is in for a whirlwind, it is just a matter of “timing”.

NOT to be left out of the fray, “Down Under” increasingly has its hands full, admittedly or not. In fact, their barbarians have become increasingly brazen, and this too is not coincidental. After all, since America is backing down, who expects Australia (the rest of the west) to withstand their thrust? Not the jihadists.

Mohammad Kiad, 25, and Omar Al-Kutobi, 24, were arrested in Fairfield, western Sydney, where a police raid allegedly uncovered a machete, a hunting knife, an Islamic State flag and a video featuring both the men, with one recorded making threats of carrying out an attack.

During Question Time in parliament on Thursday, Mr Abbott said he was shown the video during his security briefing with the Australian Federal Police Commissioner and the Director-General of ASIO this morning. “Kneeling before the death cult flag with a knife in his hand and a machete before him one of those arrested said this:

Both men arrived in Australia from the Middle East as refugees but allegedly became radicalised in recent months.  Mr Al-Kutobi was granted citizenship in 2013 and was studying to be a nurse while Mr Kiad, originally from Kuwait where he immigrated from in 2009, was reported to have been recently fired from his removalist job.

While some neighbours told Fairfax that he was ‘friendly’, ‘open minded about religion’ and ‘never talked about Islam’, others admitted he and Mr Al-Katobi had begun acting differently after the anti-terror raids in western Sydney last September. ‘He began wearing a scarf, just like ISIS and Mohammad, he grew a long beard,’ Neighbour Michael David said of Al-Kutobi – http://www.dailymail.co.uk/embed/video/1158902.html

WHICH brings us to the Marines…and the outrageous, unforgivable and humiliating spectacle that their supposed Commander-in-Chief subjected them to:

The Marine Corps has clarified what Marines did under State Department orders in Yemen following the evacuation of the U.S. embassy.

Crew served weapons were destroyed at the embassy, while Marines’ personal weapons were “rendered inoperable” at the airport, and their destroyed components were left behind.

The Marine Corps does not dispute the reporting that CENTCOM is outraged over weapons being rendered inoperable.

Here’s the statement from the Marine Corps:

The Marine Security Force left the American embassy in Yemen for the movement to the airfield as part of the “ordered departure” with only personal weapons. All crew served weapons were destroyed at the embassy prior to movement. None of them were ‘handed over’ in any way to anyone. The destruction of weapons at the embassy and the airport was carried out in accordance with an approved destruction plan.

Upon arrival at the airfield, all personal weapons were rendered inoperable in accordance with advance planning. Specifically, each bolt was removed from its weapons body and rendered inoperable by smashing with sledgehammers. The weapons bodies, minus the bolts, were then separately smashed with sledgehammers. All of these destroyed components were left at the airport — and components were scattered; no usable weapon was taken from any Marine at Sana’a airport.

To be clear: No Marine handed a weapon to a Houthi, or had one taken from him.”

That’s a story that just makes you wonder what the hell is going on at the State Department.

POTATO…potatoe…”inoperable”…if a weapon doesn’t operate, you are effectively disarmed!

IN a very real sense, if a “band of brothers” were to drag the Traitor-in-Chief out of the White House, well, they would be MORE than justified. Righteous.

CONCLUSIVELY, particularly to America’s (the west’s) Islamic enemies, symbolism is very high on their radar.

IN this regard, what greater symbol is there – in order to show the US in retreat, relative to its waning power – than to have its vaunted Marine Corps render their weapons “inoperable”, and to leave them behind in enemy territory?

MOST significantly, this devastating humiliation was NOT due to the enemy’s triumph on the battlefield , but by the hand of HUSSEIN Obama’s State Dept!

BASICALLY, Libya’s Islamic State implosion ties into Australia’s emerging jihad (Europe’s too) through the purposeful deconstruction of the US as the west’s hyper-power. Thus, disarming the Marines – as they were ordered to abandon the US embassy in Yemen – sent a dual message: a white flag of surrender to Islamic jihad, and HUSSEIN Obama’s personal slap to the military, specifically, to its “baddest asses”. 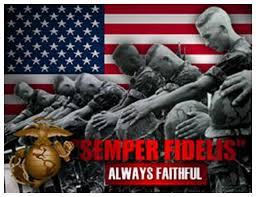 TO wit, the question is not how the above is linked but the inverse: how could it not be?