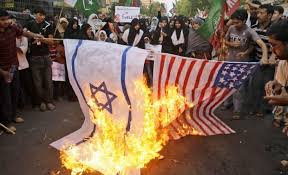 GEO-POLITICS operates at warp speed, but its moving parts are rarely understood for what they are. Rather, too many (until recently) have relied upon their leaders (political and media-based) to “set the strategic record straight.”

IN this regard, there is little more pressing than stopping Iran from gaining nuclear weapons, irrespective of any obstacle. And for those who believe that the threat is “only” to Israel, think again. Agreed, wiping Israel off the map is their absolute plan, but destroying America is on their target bank too.

BUT to ensure that this existential point is duly cemented, please refer to what Israel just uncovered: satellite images reveal new long-range Iranian missile and launcher! In other words, said missiles are NOT required to strike Israel, but they are target-worthy for America. Bull’s eye.

NEVERTHELESS, first and foremost, Israel’s leaders are duly sworn to eliminate threats, whether near or far. In this regard, PM Netanyahu has a spotty record of accomplishments. Said details were delineated (at a global interview), immediately after this summer’s war with Hamas “ceased”. No sense re-working that wheel.

NOT only that, but PM Netanyahu’s spineless tethering to Barack HUSSEIN Obama’s “rebels” has catapulted ISIS into Israel proper! Don’t believe it? Well, here is the poop and scoop.

ACUTELY, in regard to the existential threat from Iran, PM Netanyahu failed miserably, despite ordering proxy strikes here and there. His inability to abide by his own “red lines”, those which have come and gone, is beyond the pale. As such, let’s place our cards on the table: in the main, he caved. He opted to leave the gravest threat to Israel in the hands of an Islamist POTUS, but now he is attempting to walk back his spinelessness by pleading before Congress!

TRUTH dare be told, back in Dec. 2012 (5 months into this site’s inception), it was painfully obvious that PM Netanyahu’s much ballyhooed U.N.”red line” graph was nothing but a cartoon-like drawing. Meaningless.

EVEN so, it doesn’t take a strategic master to figure certain moves out: Obama is Israel’s enemy and an avowed Islamist. Incontrovertibly, he is committed to Israel’s destruction, thus, exposing PM Netanyahu’s fatal flaw – relying on him to “take care of business.”

OMINOUSLY, as a shadow war plays out on Israel’s northern border – between Israel, Iran, Hezbollah and Syrian/ISIS agents – it is astonishingly obvious that PM Netanyahu has NOT learned his (tunnel digging) lessons.

AS a matter of record, just as Hamas dug a labyrinth of explosive tunnels right under the IDF’s nose in Gaza – PM Netanyahu ordered them to play deaf, dumb and blind – so too Iran’s proxy pawn, Hezbollah, is tunneling its way underneath northern Israel!

Israeli settlements along the border with Lebanon have almost given up. They even made recordings of the digging sounds right under their homes, but even this did not convince anyone in the IDF that Hezbollah is digging tunnels.

So let me tell you. The Hezbollah is digging tunnels. Very rapidly. Just like the IDF did not know how many assault tunnels there were in the Gaza Strip, they also do not have a clue as to what’s going on right under its nose along Israel’s northern border. Ego issues? Lack of means? No, just being stubborn. It would take an incident before they would actually believe those living right on the border with Lebanon.

CAN you believe it? Do.

STILL, yet, a three-part mutually inclusive question remains: how does one explain Barack HUSSEIN Obama’s counter intuitive, seemingly inexplicable unpatriotic “negotiations” with Iran, when he understands full well that the mullahs are scamming and scheming? Moreover, where is the linkage between Barack HUSSEIN Obama’s empowerment of Iran; Hezbollah’s Latin American sleeper cells, and Argentina’s newly deceased Prosecutor, albeit under less than kosher circumstances? Everywhere.

INTRINSICALLY, Barack HUSSEIN Obama’s mad dash to secure an “agreement” with Iran’s genocidal mullahs renders ZERO room for “obstacles”, be they from domestic opponents, foreign-wise via Israel, or even emanating from apoplectic Sunni regimes. He is Allah bent re Iran and that is that.

In this warning, the Iranian official introduced two new features: Tehran has never before set red lines for Israeli military action; neither have the Iranians ever admitted to relaying a warning to Israel through Washington – at least not in public.

The Islamic Republic was saying in effect that it is not only acting in concert with the Obama administration over a nuclear accord, but the two powers will also be aligned against any potential Israel military action against Iran that is intended to upset the nuclear accord unfolding between Washington and Tehran.
In Washington, State Department spokeswoman Jen Psaki declined to comment on “private diplomatic contacts with Iran” beyond saying that no threat was delivered to Israel in the latest round of nuclear talks….

AS reiterated, the Islamist-in-Chief has the mullahs backs. He will NOT tolerate any “interference” re the “negotiations”, as such, Iranian mouthpieces felt secure enough to publicly state as much!

POINTEDLY, jihadi cells primed throughout South America help to accelerate a front arm, one which is within striking distance of America. In fact, this trigger hair scenario is sans nuclear weapons! Imagine that.

(In 2011, Mahmoud Ahmadinejad palling around with Hugo Chavez…hmm)

AS to the Argentinian Prosecutor’s very suspicious death, look at what he was on the cusp of exposing, thus, even causing the investigative journalist – who broke the story – to flee for his life to Israel:

The journalist who first reported the mysterious death of an Argentine prosecutor has fled the country for Israel, saying he was a “marked man” who feared for his life and was being followed by Argentina’s security services.

Damian Pachter, a reporter with the Buenos Aires Herald, broke the news that a prosecutor who accused Argentina’s government of a cover-up had been found dead from a gunshot wound in his apartment.

Alberto Nisman’s death has rocked Argentina, and the government of Cristina Fernández de Kirchner – who Nisman accused of secret and illegal dealings with Iran – first called it a suicide before suggesting he had been killed.

In the latest development in the murky saga, Mr Pachter abruptly fled the country on Saturday and flew to Tel Aviv after concluding he was being tracked by Argentine intelligence agents.

“They are using their security forces to chase me,” Mr Pachter said after arriving in Israel. “I just had to move fast and quick, as fast as I could in order to get onto a plane and leave the country.”

In a first-person narration published in the Israeli newspaper Haaretz, Mr Pachter said a man wearing sunglasses at night followed him into a cafe where he was due to meet an important source.

“I was sitting around there for two hours or so when a very strange person came in. He wore jeans, a jeans jacket and Ray-Ban sunglasses. I noticed him immediately but stayed where I was. He was sitting two tables from me,” Mr Pachter wrote.

“I then had to consider the best thing to do, because when an Argentine intelligence agent is on your tail, it’s never good news. He didn’t just want to have a coffee with me, that’s for sure.”

He left on Saturday morning, flying first to Uruguay, then Spain and on to Israel, where he is a citizen.

The Argentine government responded by tweeting out the details of his flight from the official account of the presidential palace, apparently in an effort to show that Mr Pachter was due to return in February and had not really fled.

CONCLUSIVELY, understanding that the Islamist-in-Chief is more in league with rogue actors, rather than with his sworn duty to protect America, Hezbollah’s ready-to-pounce factor suits him very well. By the way, Putin is in league with the S. American jihadi thrust into America. Similarly, he shields Iran’s mullahs from any attacks on their nuclear facilities. Yes, the oft-mentioned highly flammable red/green alliance.

MOST significantly, is it any wonder that Barack HUSSEIN Obama went ballistic when Congress recently issued PM Netanyahu an invite to address Congress (lying that he was not notified, when he was), so much so that he is refusing to meet Israel’s duly elected leader, ostensibly, on the bizarre grounds that the White House doesn’t interfere in Israel’s elections! Liar, liar, pants on (Islamic) fire….

NEVER mind the fact that Bubba Clinton made sure to invite “never say die to peace” PM candidate Peres for a pow wow, a month before Israel’s election. Yet, even more revealing, the Liar-in-Chief has dispatched a TOP GUN team to ensconce themselves in Tel Aviv, chiefly, to ensure that PM Netanyahu loses the upcoming March elections! Brass balls.

NOW, aside from the fact that the Anti-American-in-Chief wants radical leftist/Arabist Livni  – a crass political opportunist, no less – to take over Israel’s premiership, in tandem with her comrades, the real thrust lies within his desperate quest to stop PM Netanyahu from having any real say during the “delicate negotiations” with Iran.

BOTTOM LINE: let’s get this straight: from the get go, the Renegade-in-Chief, in tandem with his main consiglieri, Iranian-born Valerie Jarrett, have made it their mission to assist Iran in becoming an emerging empire, a nuclear power. Thus, she has been in secret talks with Iran’s leadership since 2012, at the very least!

MIND you, the fact that he has empowered the Muslim Brotherhood Mafia is decidedly not in contradiction with assisting Iran’s ascendancy, even though Sunni Arab/Gulf states are in an uproar over Washington’s drive to essentially usher Iran to the nuclear threshold.

WHAT the hell is really going on?

IN effect, he has been hedging his Islamic-driven bets, indubitably, as both Shia and Sunni powers are ascending. The point being, an Islamic Shariah law (global) takeover is the end point.

BUT if Obama Inc.’s intentions are still unclear, ponder what his mouthpiece at State, John Kerry, has been stating, even as Islamists (Shia and Sunni) slaughter in the name of their pagan, Allah: terrorists kill for thrill seeking, not Islamic jihad! Heck, even many Egyptians are livid, becoming very vocal about Obama Inc’s machinations and intentions. Not exactly complimentary.

AGAIN, Barack HUSSEIN Obama’s goal is NOT to eliminate Iran’s nuclear program, but to create the appearance that his “peaceful” “negotiations” stopped Iran from becoming a nuclear power under his stewardship! In a pig’s eye.