WESTERNERS tend to view the “fairer sex”, in comparison to male counterparts, as decidedly more tender-hearted. Well, whether or not this is a “fair” assessment, the fact of the matter is that perception is often reality. But from this end it is nothing but a myth. Know thy western history well…geo-politics too.

AND when it comes to Islamic females aka “Muslimas”…don’t be fooled by this hip-sounding appellation…they beat their male jihadis – by a landslide – in the barbarism department, be they ISIS aligned or any other Islamic appendage. Makes no diff…

NOW, don’t be distracted by their “demure” Islamic attire, nor by witnessing them walk paces behind their male companions in a subservient manner. The above is cultural in nature, as well as derived from so-called religious mandates. Nevertheless, it in no way impinges upon their inner boiling ferocity. 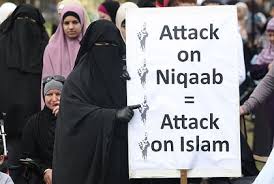 IN fact, the oppressive and misogynistic treatment of females in Islam only serves to fuel their smoldering fires. So, what better way to expunge their overwhelming rage, other than through treating those (be they males or other females) they consider enemies of Islam – or “shaming” Islam – to the most inhumane punishments?

JUST as a foretaste…

The feared Al Khansa brigade, said to include Brits, use a gruesome torture instrument called the ‘biter’ to impose strict Sharia law on women in their capital Raqqa.

The giant device consists of two iron jaws covered in spikes that are clamped around the victim’s chest causing immense pain.

Residents in the beleaguered city say the Al Khansa force tortured the woman after they found nursing her child in the Syrian city’s bus station.

The reports emerged as a monitoring group reported at least 120 killings by the terror group of its own militants in the past three months.

Around 1,880 have murdered since the terrorist network declared a “Caliphate” or “Islamic state” in June this year. Over the past six months 1,177 civilians have been slain, including eight women and two children.

It is estimated that 930 civilians from the al-Shaitaat tribe, which is at war with Isis in eastern Syria, were killed in the countryside of Deir Ezzor

One woman, aged 24, was arrested for having see-through clothes.

Brave Batol revealed: “I was in the market buying a few items when the Khansa battalion came and arrested me on the grounds that the Niqab which I was wearing did not meet Sharia requirement.

“They arrested me and escorted me to the torture chamber. Then they asked me to choose between a whip and a biter. I did not know what a biter was and I thought it is a reduced sentence, I was afraid of whipping, so I choose the biter.

“Then they brought a sharp object that had a lot of teeth and held me, placing it on my chest and pressing it strongly. I screamed from the pain. They later took me to hospital.

WELL, at least from this well-informed (Islamic) perch, their behavior rises into the stratosphere within the “passive aggressive” (passive among those they are cowed by…aggressive towards others they can torture) behavioral spectrum.

ALONG this trajectory of barbaric behavior, it goes without saying that due to massive Islamic inbreeding, both males and females are prone to more bizarre mental defects, not to mention physical aberrations. Don’t forget this.

IN this regard, let’s get to the heart…the latest craze among Islamic-infused females…hardly an anomaly among one or two foaming-at-the-mouth jihadis.

If you think ISIS’s killing methods are bad wait till you see what one video in Arabic done by a Muslim lady dressed in a Hijab circulated to Muslims worldwide.{blogger’s note: video has since been removed by youtube censors…hmm}

The video was a complaint to Caliph al-Baghdadi of ISIS as “the call of Muslim mothers” arguing that such methods as “beheading” and “shooting” are just too humane and will not work to stop the U.S. led coalition air raids which she complained that this is persecution against her living in Syria. To eliminate the attacks she suggested that an Ottoman method of execution be used to detract pilots from joining the coalition against ISIS.

She suggested to use the captured Jordanian pilot Moaz Kasasbeh and begged not to execute him mercifully by using a bullet or a knife, but begged them to re-institute the Khazouk.

Everyone in the Middle East knows three things told to them by their grand parents about the Ottoman Turks and what they spread throughout the Middle East: Sihr “sorcery,” Baksheesh “bribery”, and the Khazouk which is a spike driven through the victim’s rectum, which the Ottomans used to terrify locals and deter potential insurgents. And this is exactly what this lady wanted to re-institute:

Khawiskou “impale him” she cries out “then send him to his mother” she added.

“Why are the Arab world fighting us. We are Muslim doing the will of Allah”.

“I am pleading [ISIS] to honor my special request that you Khazouk him “impale him” and post it all over the social networks and the media”.

One TV series and in order to thwart neo-Ottoman expansion reminds how horrific this type of execution was:

As we learned in school, the Ottomans were creative when it came to all sorts of weirdities. At times they used the hot poker, a red-hot metal rod that is inserted through the anus which the expert executioner is able to avoid puncturing the heart and the victim could live up to two days before he dies since the bleeding is minimized as the hot rod caterizes the wound.

But as it seems, some are begging to revive the Khazouk in revenge against the U.S. led coalition pilots. But to this lady, the Khazouk is no fantasy, she is serious.

The West does not understand such tradition as a Muslim woman making such an appeal. {blogger’s note: emphasis placed}

Here, let me explain it all. In Ibn Athīr’s famous history book al-Kāmil, he mentions the story in our history of a King called al-Mu’tasim, who was from the Banū ‘Abbas. The event goes like this; A Muslim woman was captured by the Romans and imprisoned, so the Romans laughed at her. The leader of the Roman king sarcastically said, “You won’t ever leave this place until the muslim king himself removes you from these shackles.”

The woman shouted “Wa Mu’tasima!” [Oh my grief, Mu’tasima!].The Roman King laughed at her and said : “He will never come to save you unless he was riding “ablaq” a black and white horse. He said this in a way of mocking her and showing the impossibility of the situation.

When al-Mu’tasim heard of the news, he gathered a whole army and made the entire army ride the “ablaq” horses and defeated the Romans (who in this case are viewed as the U.S. and Europeans) and himself entered the prison where the Muslim woman had been imprisoned. “Who are you?” she said.”I am al-Mu’tasim.” He freed her from her shackles, a sign of humiliation for the Romans.

And this became the issue that when a Muslim woman calls upon the Caliph for help he must comply. The Muslims always use this story al-Mu’tasim, a call of a Muslim woman’s appeal in Jihad must be honored and in this case, the hot poker.

ASIDE from everything else that this site has taught the readers about Islam – most importantly here, having had a direct hand in its review – is it any wonder that Congressional Rep Womick has publicly called to “purge” the armed forces from Muslim-Americans?

AND to those who will wail and whine about such “racist” (never mind that Muslims are NOT a race) declarations, a sobering thought should come to mind – or not:

AT a time when Muslim-Americans are a small, but growing and dangerous minority in the U.S., several horrific acts of jihad were already waged upon U.S. servicemen by these “soldiers for Allah”, albeit in U.S. military uniforms.

REST assured, as soon as they see an opening to up the ante, the shooting rampages (by the likes of Islamist Maj. Nidal Malik Hasan, who shouted “Allahu akbar!/Allah is greater!” and brutally murdered 14 people, including an unborn baby and injured 30 others at Fort Hood, Texas) will be remembered as a walk in the park, next to the newer “methods of jihad” they will employ. This includes Muslim-American soldiers and civilians alike. Jihad is jihad.

MIND you, Hasan received free helicopter rides from the local jail nearly every day, lived in a private room built to accommodate his medical needs, wore a beard against Army regulations, traveled with his own security detail, has received numerous trial delays and collected a full salary of about $80,000 a year – all while many of his victims say they’ve been forgotten.

ACCORDING to KXAS-TV, the NBC News affiliate in Dallas, the Army psychiatrist has been paid more than $278,000 since the Nov. 5, 2009, shooting because the military has said it cannot suspend his pay without a conviction. Yes, he was finally sentenced to death in Aug. 2013, but he did what he did as a “martyr” for Islam, despite what others opine.

SACH ha’kol, at the end of it all, readers should be convinced of two prime dangers: firstly, female jihadis can top the male “soldiers for Allah” jihad for jihad, when left to their own devices. Literally.

MOREOVER, the notion of NOT “gutting” U.S. ranks – for starters – of Muslim-Americans is akin to national surrender. Basically, it is worse than waving a White flag and more like submission to a Black flag of death!

AGAIN, it is not a question of inclusion of this or that minority. Pish posh. But it is one of national survival. Besides, would the Pentagon allow known kamikaze pilots to enter their ranks??

THINK about the insanity of NOT “purging”!