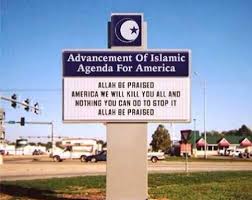 A “welcome” mat laid out…the sentiments of these words…piercing into the heart of America: Dearbornistan!

Dearbornistan, aka Hezbollahland, is never far from these pages. There is every good reason why this locale – within America’s heartland – is considered “ground zero” in relation to Islamic jihad, mainly (though NOT exclusively) on the Shia side. Know thy jihadi hydras well.

HOWEVER, as a gift for newbie readers, this blogger will recap Hezbollah’s “special” status. Trust…its American center of gravity is in Dearbornistan. Yes, they have successfully branched out into many other U.S. cities too…entrepreneur-like… but their American hub is in Dearbornistan. Well informed “birdies” keep this investigative journalist apprised!

WORKING alongside some of the most accomplished counter-terror experts, info has a way of coming full circle, so to speak. So, even before the general public finds out what’s what, certain matters reach these ears.

THAT being said, these same eyes and ears have targeted Dearbornistan (and associated Islamic locales) for years, even before 9/11/01. In this regard, at the inception of this blog site, the following was noted in Sept. 2012:

As reported, Jamat ul Fuqra (a leading Islamic terror group, deeply entrenched in North America) is mainly involved in tactical techniques, sort of like high level masters in jihadi boot camp training. You gotta see it to believe it. Unfathomably, they escape much too much public scrutiny – and con many – by operating under innocuous sounding names. Here’s a sampling – The International Quranic Open University  and The Muslims of the Americas  . How gullible do they think westerners are? Very.

Jamat ul Fuqra are awash in infidel blood. Most infamously, they are the head choppers of Wall Street Journal reporter Daniel Pearl. They are particularly fond of beheadings. Say what? Too close for many fellow New Yorkers (my home state) comfort, the group receives some of their paramilitary training at their Islamberg compound in New York State. Not to get too specific – as part of a “research” project  in 2006 – I accompanied a trusted contact to the outskirts of the compound, knowing full well that this was as far as we would get. No matter. We came, we saw, we went…..hearing constant sounds of gun popping, and intermittent shouts of “allahu akbar” – god is great – in broad daylight !!  Roaming guards dressed in (Islamic) combat fatigues, and watch towers on each side, were clearly visible.

Normal folks surely are wondering – how is it possible that terror compounds can exist in the land of the free, the home of the brave? What is going on here?

To add insult, to grievous (US & Canadian) injury, Islamberg is one of 35 ! jihadi compounds in the US. About half a dozen (which are known) exist in places such as Charlotte County in central Virginia, Hancock, New York, and other  rural confines all over the US. ‘Islamberg not the only radical Muslim compound flourishing in North America’ highlights the dangers, yet there are more than a few sources – http://www.canadafreepress.com/index.php/article/18065.

For those who prefer visual aids, here is a heart stopper – ‘Terrorist training camps in America’  – http://www.youtube.com/watch?v=WubEFsN5pk8. Take a breather…..then read this report  – ‘New Film Exposes Nashville Islamist Network’  – http://www.familysecuritymatters.org/publications/detail/new-film-exposes-nashville-islamist-network – the video will hopefully work through this link. Regardless, read the whole thing. Plus, view this short video ‘American Nightmare: The Islamists are Here’. Exactly.

LESS than two months (Nov. 2012) after gift number one was written, it became mandatory to offer another one – free of charge! Doesn’t get better than that.

EVER since this investigative journalist became involved in the ‘”track and hunt” of Islamic jihadists (see its genesis here – adinakutnicki.com/about/ ), one factoid kept creeping to the fore; the fingerprints of Iran.

While they have varying groups of jihadi “soldiers for Allah”, their forward thrust is Hezbollah. It is their tentacled, terror footprints which are spread over the globe. But of special concern to Americans, should be those amassed in Latin America (in the tri-border region), and most significantly, as they are the ones ALREADY embedded within “any city/town USA”.

Regardless, would like to be the bearer of good news – for a change! – but it is what it is. Adding to this deadly mix, have been warning the readers – concerning America’s porous borders – about the multiplicity of entry points for smuggling.

One of the most lucrative partners of Islamic jihadists (certainly not exclusive to Iran’s proxies, but they do have a quasi monopoly…kind of like the Teamsters) are the multi-faceted, “talented” drug kingpins, lording over much of this human cargo, in tandem with weapons smuggling. All of this “entrepreneurial” activity centers around Iran’s (eventual) orders to pounce.

And it is not as if government officials haven’t been aware of the looming dangers. To the contrary. Yet…the Islamist-in-Chief (and his surrogates) favors a “hands off approach” to the illegal alien issue.

In point of fact, the infamous ‘Fast & Furious’, which not only killed American agents but Mexicans too, in turn allowed for an unprecedented weapons flow into the hands of these same cartels, now arming Iranian agents! Talk about coming full circle…almost like a necklace of death.

You got that? Though quite a few sleeper agents have been picked up crossing the border, it is a pittance, especially when juxtaposed against those who slipped through.

THE gift that keeps giving….as Hezbollah’s GROWING presence in U.S. prisons is waiting to explode, once said inmates are released. Alternatively, whichever comes first, even if behind bars, their plotting continues apace. Consequentially, their plans will be executed by outside foot soldiers. This info is solid as a rock. Rely on it.

HANG on…we are not done yet. Let’s divert onto Obama Inc.’s Islamic-mandated DOJ and the danger posed to the kiddies. Oh my…

BUT before we get to the recent “news” re Dearbornistan, let’s review a backgrounder on AG Holder’s Islamic putsch via the kiddies; a tag-team approach with Barack HUSSEIN Obama.

Islamic (kiddie) penetration takes many forms – burqas and the like.

There’s a new controversy in Texas involving the online public school curriculum called CSCOPE, which already has been the subject of heated debate and state legislative hearings.

This is the dreadful situation facing America’s kiddies, even as one of the most well-known private schools, Exeter Academy, trucks with terrorists, Obama’s surrogates are hide nor hare in interfering. Why? As if.

Full Disclosure: a few close acquaintances/business associates graduated from the halls of Philips Exeter Academy (the subject below) back in the early 1980’s, and just a few years before its Islamic infestation. These individuals are at the top of their chosen professions, therefore, the influence many of its graduates yield is considerable, even if not in the Presidential arena.

Meet Maggie Hassan, the Democratic candidate for governor in the state of New Hamphshire. Maggie is married to Thomas Hassan, the principal of Phillips Exeter Academy. For those of you who are not familiar with Phillips Exeter Academy, it is ranked the number six school in the country and has an extremely impressive list of alumni that includes Oliver Wendell Holmes, John F. Kennedy and the list goes on:  Bill Belichick, coach of New England Patriots; James Spader the actor; Dr. Spock, renowned pediatrician from the 1950’s, and many more. The list is like a “who’s who” of American history, and there is no doubt that the students currently enrolled will have similar power and influence in the decades to come. So what could be the problem with that? The short answer: radical Islam.

To quote an excellent article by Chris Anu of the New Hampshire Herald:

…On Thomas Hassan’s watch, numerous Islamic scholars and activists with ties to radical Islamic groups have been invited to address student assemblies and other student forums. Among them, Hadia Mubarak, former president of the Muslim Student Association, spoke at a PEA assembly on Oct, 1, 2007. Founded by the Muslim Brotherhood, the MSA was labeled “a virtual terror factory” by terrorism expert Patrick Poole. Its former members include such notable jihadists as Anwar al-Awlaki, Ramy Zamzam, Omar Hammami, Abdurahman Alamoudi, Aafia Siddiqui and Ramzi Yousef.

AGAIN, back to Dearbornistan…and the DOJ’s (Obama Inc.’s) grabbing of the hearts and minds of America’s kiddies.

ISLAMIC-addicted DOJ (may Holder and gang rot in hell) is forcing Dearborn Heights school district to teach in and translate all documents to Arabic! You got that? In America, teachers must now teach as if they live in Saudi Arabia, Lebanon or another one of the Islamic terror holes. A snowballing…chilling…effect.

A great victory for the civilizational jihadists.

“This is a great victory for the Arab-American community and its children to become contributing citizens in our country,” said Shereef Akeel, a Troy attorney who filed a federal complaint in 2011 on behalf of Hiam Brinjikji, a counselor in the school district who complained about the district’s neglect of Arab immigrant students.

District officials could not be immediately reached for comment.

Brinjikji, who is of Arab descent, said in the federal complaint that she complained about the lack of attention to Arab-American students who didn’t know English well. She also said the district wasn’t hiring enough Arab-Americans and said she was retaliated against for complaining.

Dept. of Jihad gets involved because one biased person complained?

DUE to all of the above – and so much more – this investigative journalist has been warning about the encroachment of Sharia law (this is what it amounts to) into America. Yes, for the umpteenth time. Enraging.

MIND you, an Islamic thrust (described above) is happening all over America. More pointedly, the infiltration within Michigan is the same “middle American” state, in 2012, whereby it was deemed “incitement” to wave an Israeli flag!

Soon it’ll also be singing “Amazing Grace” within earshot of someone looking for something to be offended by. Because in the Islamic world, the victim is always at fault …

Flashback: Dearborn Muslim Sentenced After Attempting To Run Down Christians – “Mike Mohamad Agemy, who drove his SUV at a group of Christian demonstrators in front of the Islamic Center of America on June 17, won’t be headed to trial… Agemy pleaded to two lesser charges of aggravated assault, which each carry a sentence of up to six months in jail. Somers sentenced him two years’ probation, an anger-management class of about 12 weeks and $1,150 in fines and court costs… Agemy, 47, initially was charged with seven counts of assault with a dangerous weapon and one count of reckless driving.”

RESULTANT, does anyone sense a burgeoning pattern of Islamic intimidation and stealth jihad? If not, way past time to catch up to speed.

BESIDES, those who know what’s what understand that the end goal here is Shariah Law. As is said, this is where the rubber meets the road. Indeed, one of the main roads is through America’s school children, whichever community they reside in. Poor clueless kiddies. Parents too.

THUS, anyone who believes that what happens in Dearbornistan – kiddie-wise or via another Islamic capitulation – won’t affect them in “any city USA”, well, they are hallucinating. It’s that simple. That deadly.