Those who voted for Barack Hussein Obama – on the basis of his skin color – hoped  against hope to shore up their post-racial bonafides. Concomitantly, they expected to expunge any taint associated with America’s history of racial strife.

How did that guilt-ridden, “holier than thou” crap work out?

Little did many ( foolhardy ) Americans realize that the candidate for “Hope & Change” exploited their inner demons, only to usher in a national nightmare of gargantuan proportions.

This blog was hip to the Race-Baiter-in-Chief’s jive talk from the get go, and am hardly a genius.

Besides, it is not as if American voters in 2008 ever owned slaves, and the only slave owners left are in Muslim countries! How’s that for some truth-telling?

In fact, as evidenced by this blog’s many commentaries, the POTUS is more adept at being the Racialist-in-Chief, than a ‘healer and transformer’ for American ills. As a foretaste:

Indictment Number 4 –  https://adinakutnicki.com/2012/07/31/the-purposeful-deconstruction-of-the-us-the-co-opting-of-dhs-into-a-radical-force-for-societal-transformation-commentary-by-adina-kutnicki/….and on and on….

And one of these days he is going to have to ‘fess up to his audience, regarding the genesis of his blue head swathing…maybe this American-Israeli should adorn likewise…but let’s not digress.

‘The Most Divisive Campaign In American History’ – http://sultanknish.blogspot.co.il/2012/08/the-most-divisive-campaign-in-american.html

“In 1980, when President Reagan asked Americans, “Are you better off now than you were four years ago”, it was still possible to campaign on a theme as simple as the job performance of the other guy. But now, 32 years later, the campaign hinges on a much more fundamental split among the voting population.” 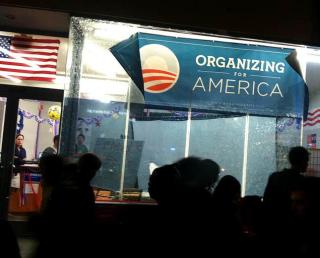 “This basic gap was obscured in the 2008 campaign by the window trappings of inspiration. Among all the plastic pillars and stolen quotes from poets who stole them from sermons, it was harder to see that the underlying theme of the campaign was dissatisfaction with America. But in 2012, Obama can no longer run as a reformer or an optimist.”

“The coalition that he committed to last year is a coalition of those who are unhappy with America, not in the last four years, but in the last two-hundred years. Its core is composed of groups that fear democracy and distrust the will of the people. There is no optimism here, but a deeply rooted pessimism about human nature and the country as a whole. It is the Democratic Party’s coalition against democracy.”

“After 2010, the numbers were crunched, and it was clear that Obama and the Democrats could not win a mainstream campaign. Instead, they targeted narrow groups, stirred up conflicts over issues aimed at that group, whether it was union pensions, racism or birth control. There was no more pretense of a national election, only a frenzied rush to polarize as many groups as possible and join them together into an acrimonious coalition, not so much for anything, as against Republicans.”

“There isn’t any inspiration here. Just paranoia over everything from gay marriage to abortion to racial profiling to illegal immigration. A dozen illegal benefits being handed out with the explicit threat that they will be lost if Romney wins. A dozen mini-civil wars being stirred up to divide Americans and set them at each other’s throats for the benefit of the Obama campaign.”

“From Occupy Wall Street to Wisconsin, from Trayvon Martin to Chick-fil-A, the goal of these manufactured conflicts has been to divide and conquer the electorate by emphasizing group rights over individual economic welfare.”

“Obama can’t win on the economy. He can’t win on foreign policy. He can’t win on any aspect of his administration. All he can do is stir up violence and then promise to heal the country in his second term while winking to all the representatives of the grievance groups. It’s not a new game, but the Democratic Party has never played it quite this baldly in a national election. And if it succeeds, then national politics will have finally been reduced to the level of a Chicago election.”

“We were expected to believe that the typical Obama voter in 2008 was hoping for a better country, but in 2012 there is no more hope, only hate and fear. The typical Obama voter is not acting as an American, but as a representative of an entitled group looking to secure and expand those entitlements at the expense and the detriment of the country at large.”

“To vote for Obama after years of grotesque economic mismanagement that has no precedent in history, that exceeds the worst actions of Andrew Jackson or Ulysses S. Grant, is not the instinct of an American, but a selfish greedy looter scrambling to grab a few dinner rolls off the tray while the ship is going down. There is no policy justification for voting for a man with the worst economic and foreign policy record in the country’s history. There is no American justification for voting for him. Only the UnAmerican motivation of carving up a dying country into group fiefdoms privileging identity politics over the common good.”

“This is an UnAmerican campaign. It is an Anti-American campaign. It is a campaign by those who hate and fear what America was and who resent having to care about anyone outside their own group. Its group jingoism, its dog whistles and special privileges are repulsive and cynical, treating the people of a great nation like a warren of rats eager to sell each other out for a prize from the Cracker Jack box of identity politics entitlements.”

T”here is not a single Obama voter anywhere in the land who believes that another four years of him will make this country better. Not a single one from coast to coast. No, what they believe is that he will make the country a worse place for those people that they hate. That he will have four more years to sink their ideas deeper in the earth, regardless of how many families go hungry and how many fathers kill themselves because they can no longer take care of their families. What they believe is that Obama will grant their group more special privileges and the rest of the country can go to hell.”

“The Obama campaign is not accidentally divisive. It did not stumble into divisiveness. It is not even divisive as a byproduct of its real aims. Divisiveness is its aim. Divisiveness is the only way that a divisive administration can hold on to power. The anger and the violence are not an accident, they are the whole point. Set one group against another, feed the hate, massage the grievances and very soon there is no longer a nation but a handful of quarreling groups being roped into a mutual alliance to reelect their lord protector whose appeal is that of the outsider becoming the insider.”

B”ain is a metaphor whose details don’t truly matter. The target audience for that swill doesn’t really care where Romney was when a steel plant was shut down. It doesn’t care that like so many private equity bigwigs, the man who actually was in charge is one of Obama’s bundlers. This isn’t about truth, it’s about menace. The Bain message is that Romney is a man who takes things away. That is the  image that the UnAmerican alliance is meant to take away. The ominous sense that Obama’s era of giving them things is about to come to a close and Romney’s era of taking away things will begin.”

“It doesn’t take much prompting for the UnAmericans to come to this conclusion. Thieves are always looking over their shoulders. They always expect to have their ill-gotten gains taken away from them. And that is Obama’s true achievement. Like Tammany Hall, he has corrupted a massive section of the population and made it complicit in his criminality. What the old political machines did to cities or small groups of vested interests, the Zero has done to tens of millions, if not a hundred million people, who want him in power not because they think he’s the best man for the job, but because he’s their crook. The middle man for a crime ring that begins with him and ends with them.”

“The true insidious evil of the man is that he is the face of a machine of power and privilege that turns Americans into UnAmericans, that corrupts and degrades every ideal and principle, suborns every office and picks every pocket, while wrapping that thievery in the flag and every bit of history that it can filch. The Hussein Way is the clearest expression of the rot at the heart of the Democratic Party, the marriage of leftist agitation and powermongering with the old urban political machines for a level of abuse usually seen only in banana republics.”

“The abomination in Washington is a welfare-state technocracy that mixes crony capitalism with radical social policy. It steals from everyone and gives back to some. It plays the game of divide and conquer with the panache of marketing executives knowing that the worse the economy is, the more likely everyone is to look in everyone else’s mouth. Its worst aspect is its insistence on cloaking its cynicism as righteousness, wrapping every ugly means in the glorious flag of the ends when the truth is that its means are its ends.”

“Divide and conquer isn’t just a means to the greater end of giving Zero Hussein another four years. And perhaps another four years after that. It’s also the end. Every tyrant from Joseph Stalin to Saddam Hussein knew that a divided people are easier to rule. The more you divide them, the less likely they are to give you any trouble when you’re raiding their last pennies to pay for the latest Green gimmick that your billionaire backers have thrown up all over Wall Street.”

“Obama is the ultimate Post-American figure passing himself off as the embodiment of all that is truly American. But the UnAmericans got the real message in 2008 and in 2012 there is no other message. There is no more hope and faith, and the ones who have been waiting for are the UnAmericans who think that they are about to come into their own, when they are little more than pawns being used to rob and destroy a great nation.”

“This is the Post-American, Anti-American and UnAmerican campaign to divide up, carve up and toss aside the laws and traditions of the United States and replace them with the power of arrogance. It is the last stand of a beleaguered nation facing barbarians inside its gate. Every previous election was a contest between two American candidates who wanted to preside over the United States.”

“This is an election contest between the United States and an emerging Post-American order. That entity will be an American EU run by unelected bureaucrats, governed by politically correct technocrats and upheld by corrupt financial pirates disguising the collective bankruptcy with numbers games so elaborate that they make every billion-dollar con game and pyramid scheme that has come before seem as simple as child’s play.”

“The entity is already here. Its czars are running things in D.C., and its judges are dismantling both constitutional government and democratic elections. It creates a crisis and then makes sure that it doesn’t go to waste. It has excellent design skills and terrible planning skills. It has all the money in the world and none at all. It is the Post-American America, and 2012 is its big referendum. The one that will decide whether this Post-American America, this horrid graft of E.U. governance and Mussolini economics, Soviet propaganda and FDR volunteerism, Tammany populist criminality and U.N. foreign policy will be permitted to devour the United States of America.”

Talk about voters getting smacked upside the head…suffering kicks in the butt too…for attempting to embrace a “post racial” POTUS!

Time for a refund!

24 thoughts on “Americans HOPE To CHANGE The Occupant Of The White House..An Anti-American POTUS Runs An Un-American Campaign…Commentary By Adina Kutnicki”