TO best internalize the latest scoop-up, bear the following caveats uppermost in mind: in the same manner that many of JAG’s arrestees are well known deep staters, similarly, countless supportive accomplices/players operate behind the scenes. Naturally, they are not household names.

NOT only that, when an out-of-the-blue, singular catastrophic event occurs, indeed, the average thinker can rationalize it. Mainly, its basis becomes: an unfortunate set of circumstances, akin to happenstance, is to blame. On the other hand, any seasoned investigator can smell bull-sh*t, that is, when flung too many times. Effectively, there is no such thing as ‘coincidence after coincidence.’ Plain and simple.

IN addition, as per the below under the radar, deep staters arrest, there are way too many ‘coincidences’, so to speak.

BOTTOM LINE: all of the deep staters, regardless of their recognizability, can run, but they can’t hide from the long-arm of JAG’s grasp! 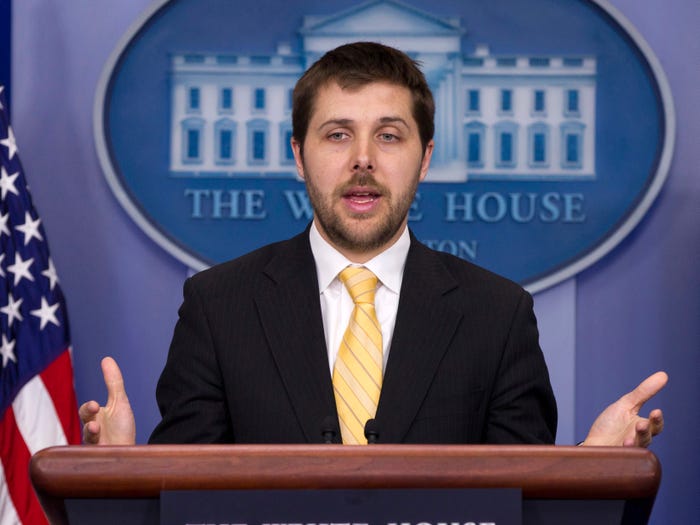 While the nation watched continuous news coverage of the Idaho killer and a divided House squabbling over the next Speaker, the White Hat partition of the United States military executed an arrest warrant on an obscure Deep Stater responsible for sabotaging the nation’s food chain and, thus, manufacturing inflation. That criminal is Brian Deese, the regime’s director of the National Economic Council and former servant to Deep State overlord Barack Hussein Obama.

The offices of Marine Corps General Eric M. Smith told Real Raw News that U.S. Marines grabbed Deese at his Massachusetts home early Thursday morning—the culmination of a 3-month probe into allegations that he participated in or oversaw a government scheme to bankrupt poultry farmers and artificially inflate the price of household staples such as eggs and chicken meat. Marines, our source said, circumvented Deese’s home security and entered the home at 3:00 a.m., hoping to catch him sleeping. But their presence frightened a house cat, which knocked over a bedside lamp, and the commotion woke a drowsy Deese, who suddenly found himself encircled by a half-dozen armed Marines. Deese panicked, shouting, “Oh God, no, not me,” and was Tazed so Marines could quietly escort him off the premises.

Deese is the second Deep Stater charged with disrupting the country’s critical food chain. In April 2022, the U.S. Military arrested, and later hanged to death, Secretary of Agriculture Tom Vilsack after proving beyond reasonable doubt that he had orchestrated the destruction of several food distribution warehouses.

In a probable cause affidavit reviewed by Real Raw News, the U.S. Navy Judge Advocate General’s Corps alleges that Deese and Vilsack conspired to cripple the food supply because “Joe thinks Americans have it too easy and aren’t paying enough for food,” in Deese’s words. Their evidence reportedly includes electronic correspondence—emails and text messages—as well as telephone conversations that began in mid-2021. The most compelling evidence, the smoking gun, is a call that took place on January 5, 2022. On it, Deese suggested that Department of Agriculture agents visit poultry farms under the pretense of “routine inspections” and randomly test fowl for bird flu. When Vilsack replied, “It’s not a bad idea but we’re unlikely to find cases of bird flu,” Deese said, “Of course we will. He wants us to.”

Between March-November 2022, agents of the Food Safety & Inspection Service, a subsidiary of the Dept. of Agriculture, visited 16 commercial poultry farms in Iowa Nebraska, and predictably chickens on those farms tested positive for avian influenza. Owners were told their birds would have to be destroyed to limit the spread of disease, and were promised the federal government would compensate them financially.

At one Nebraska egg-laying farm, FSIS destroyed 140,000 hens. Their method for accomplishing this is rather grotesque: suffocation. They either fill barns with fire-fighting foam, cutting off the animals’ air supply, or pump in carbon monoxide.

To substantiate JAG’s claims, Real Raw News spoke to an Iowa poultry farmer whose entire flock the Dept. of Agriculture destroyed in October 2022. He spoke under condition of anonymity for fear of federal retaliation.

“It never sounded right but what are you supposed to do when 50 FSIC show up. They told me samples taken from my hens had the bird sickness. I’d never seen these guys before, and was thinking to myself ‘when and how did you test them.’ They murdered all my birds; told me I’d get a check to cover my losses. I haven’t seen a dime yet, and when I call them, they never call me back. Now I’m in bankruptcy and me and family can’t even afford to eat. People in my business, we’re a close knit, we talk, and, man, this shit has happened all over, and we’re all going broke,” he said.

In closing, JAG sources told RRN that Vilsack never named Deese as a co-conspirator, but the later nonetheless will face a military tribunal for having betrayed his oath of office and committed treason against the United States of America.