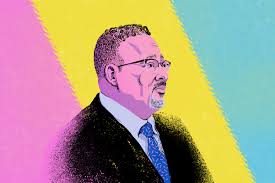 BEFORE we dig into the sordid underbelly of the following child-saving arrest, it is imperative to understand the unvarnished truths, that is, playing out before our traumatized eyes. Yes, the truth shall set the children free!

ONCE the horrors are digested (but not on a full stomach!), it will become crystal clear as to why JAG ordered a contingent of Marines to nab Secretary of Education Miguel Cardona to stand trial before a military tribunal.

AS to this end, well, death by hanging is too merciful!

The arrest took place at Cardona’s Connecticut home, one of several properties he and his wife Marissa Pérez, a former beauty pageant winner, sometimes share with their two children, Miguel, Jr., and Celine.

At around noon, Marines stormed the Cardona residence as Mr. Cardona and his wife were putting a turkey in the oven and preparing a green bean casserole. Specifics of the arrest are unclear, but JAG sources told RRN the couple shrieked when they found themselves staring down the business end of the Marines’ M27 rifles. Perez, too, was apprehended, and will remain in military custody while JAG investigates whether she played a role in her husband’s crimes. The couple’s adult children were not home at the time of the arrest, sources said.

Cardona became a target of opportunity in September, after White Hats at U.S. Army Cyber Command “obtained” disturbing, confidential letters Cardona had authored and sent to school district superintendents in Arizona, California, Michigan, and New York. In the correspondence, Cardona brazenly encouraged districts to hire non-binary teachers, writing, “Modern youth must adopt the principles of a modern world, at an early age. Not every boy is a boy and not every girl is a girl. Exposure to non-binary faculty will help today’s students—tomorrow’s leaders—understand gender is a choice and not mandated at birth.”

But the madness did not stop there.

He sent school districts additional memos the following month, reaffirming his position that cisgender faculty be weeded out and replaced by staff espousing “progressive” values. Moreover, a Faustian Cardona promoted the notion that children as young as ten—4th graders—be taught about gender-reassignment surgery and puberty blockers, which prevent the development of organic, biological sex characteristics. Additionally, Cardona said he had petitioned HHS to pressure insurance companies to fund “gender-affirming care” for school kids.

“As educators we have a responsibility to make sure students have sexual options. We must accept our role. Cisgender parents are not qualified to instruct their children of sexuality in today’s evolving world,” Cardona wrote.

JAG says Cardona, in pushing a radical agenda endangering the lives of children, exceeded his purview and must be held to account.

“His framework has nothing to do with education. It’s indoctrination. It’s corrupting the minds of malleable, impressionable children. If an adult wants a sex change, so be it. No foul. Cardona’s guilty of treason against the country and against every child and parent in the country,” a JAG source said.

In closing, our source said JAG will reveal more evidence on Cardona when he stands accused before a military tribunal.