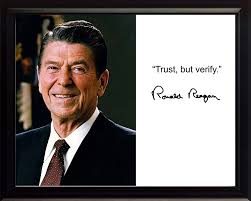 TRUST, BUT VERIFY is a well-known adage associated with Ronald Regan, the late POTUS who is a conservative icon. Ironically, its origin stems from a Russian proverb. Ain’t that a hoot!
PARADOXICALLY, while he fought the Cold War (and won) without firing a shot, he was shrewd enough to utilize this and that from the enemy camp. In other words, he was beyond wise to respect their thinking and cultural ways — unlike the vacuous, so-called leadership within Washington’s permanent bureaucratic (and chattering) class. Phew!!
IT is with the above in mind that the White Hats within JAG’s rockin’ ranks proceed apace. In other words, they know that shooting from the hip, so to speak, to catch their prey can be very costly and highly dangerous. Counter-productive.
ALAS, last week, when a deep state operative came rushing into their arms, well,

LESSON LEARNED: the best investigators never take anything on face value, most especially, if the info/intel is explosive in nature. Yes, trust, but verify!

The world is momentarily distracted by Musk’s acquisition of Twitter and the alleged Paul Pelosi attack, but so much more is going on.

The Treasury Department official who surrendered to military authorities last week has given JAG investigators a wealth of data detailing systemic corruption at the Fed that began immediately after Treasury Secretary Janet Yellen was sworn into office on January 26, 2021, sources in the US Navy Judge Advocate General’s Corps told Real Raw News.

As reported previously, Treasury Department employee Shannon Corless–convinced she was the target of a military surveillance operation–and her lawyer walked through the front door to JAG’s investigative offices in Pensacola, Florida, where she confessed to participating in an embezzlement scheme by which taxpayer dollars were laundered and distributed to Leftist organizations such as Antifa and Black Lives Matters, as well as so-called religious charities funding illegal immigrants.

The offices of both USMC Gen. David H. Berger and US Navy Vice Adm. Darse E. Crandall have denied knowledge of any operation centered on Corless, and said they had no idea who she was prior to last week.

When Corless surrendered, she gave investigators an SD card that, she said, had proof of her allegations. JAG investigators have spent the last week verifying the card’s authenticity and reviewing the contents within, our source said.

“First, we treated Corless with suspicion. Her story about turning herself in because she saw uniformed soldiers spying on her from behind hedgerows was, well, highly suspicious and sounded contrived. This woman literally saw plots hatching against her everywhere. For all we know, the Deep State could be feeding us disinformation, and the info on the card could easily be faked. Still, Corless was happily willing to incriminate herself, an odd play, and she was Treasury’s Assistant Secretary for OIA, and she’d worked for the DNI, meaning she’s positioned to know the things she says she knows. We’re being very methodical in our approach,” our source said.

He was willing to share some data found on the SD card, even though JAG is still seeking corroborating evidence. On 8 September 2022, Janet Yellen authorized the withdrawal of $12m from the Federal Reserve. The funds, according to documents on the SD card, were officially slated for Social Security payments; unofficially, they financed illegal immigrants crossing the US-Mexico border. Yellen had tasked Corless with hiring third parties to spend the cash on prepaid VISA gift cards, which were then distributed to Catholic charities that sent missionaries to Eagle Pass, Texas, to help weary illegals. The $500 cards included a note that read “may you prosper in the USA—President Joseph R. Biden and Vice President Kamala Harris.” Many gift card recipients were subsequently bussed to sanctuary cities with unrestrictive voting requirements.

“It’s obvious this was a ploy to buy votes. It’s unlikely a few thousand fraudulent votes will have an impact, but if true, it’s treason. There’s now an ongoing effort to track down the unused cards, and to speak to the names Corless’ and Yellen’s co-conspirators,” our source said.

The gift cards, he added, were just the tip of the proverbial iceberg.

Other documents on the SD card cojoin Yellen and Corless to Black Lives Matter co-founder Patrisse Cullors, a radical Leftwing activist who has perpetually argued in favor of reparations, claiming that slavery of the past continues to impede social and financial progress for African Americans. According to a BLM filing disclosed to the IRS in 2022, BLM has approximately $42m in assets. Info on the SD card, however, tells a different story.

The card, our source said, is awash with transactional reports and spreadsheets showing that Yellen in 2022 pilfered $67m from the Fed and funneled the money in hundreds of incremental payouts to Cullors and her BLM associates. The documents do not mention how the money was to be spent, but Corless told investigators that a sizable part went toward funding Leftwing midterm candidates.

Corless remains in custody pending verification of her claims, our source said.

“She’s being treated well and seems to be cooperative. If everything she says turns out true, it’s likely she’ll be given a deal. We’ll see where it goes from here,” our source said.

1 thought on “JAG Digs Deep Into Fed Employee Corless’ Allegations – Beyond the Distractions.”