THE deep state and the Mockingbird Media — in lock-step with the captured, beyond compromised security agencies — watch every nuance, word and gesture (perhaps, every fart) of “The Donald.” Hawk-like. Atop said obsessive scrutiny rests his travels. Hmm.

MOST recently, can you hear the Pravada-like propagandists, spinmeisters, as they echoed in parroted tune? 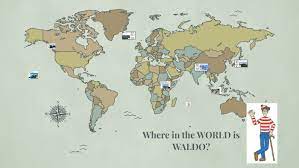 INDEED, a “Where in the World is Waldo” moment in time! Exhausting.

BUT never mind, it is not as if the country is collapsing: economically, criminally, border-wise, educationally, and by every other metric which a first-rate, civilized nation rests upon! Yes, Trump’s bird has touched down and must be tracked! Hunted.

STILL, it doesn’t take a rocket scientist nor, for that matter, an investigative journalist, to query: Why do the circling jackals give a rat’s behind where in the world he is, that is, unless all is NOT as it seems in D.C.? Rhetorical.

The mainstream media yesterday went bonkers with speculation when President Donald J. Trump’s Boeing 757-200 landed unexpectedly at Dulles International Airport, in Washington, D.C. Why was he there? Was he sick, headed to Walter Reed? Was he surrendering himself to the DOJ? Had a grand jury summoned him? Was he in D.C. to play golf? The flurry of gossip seemed unending. The media got an answer after Trump, shadowed by a procession of thirsty paparazzi, showed up at his Virginia golf course. But, sources told Real Raw News, Trump’s golf excursion was a diversion: while the rabid media focused on Trump, a senior aide who had travelled with him aboard the 757, quietly slipped away from the crowd on a clandestine mission—to visit the White House and, as once source put it, “Make sure it is as Trump left it.”

In July 2021, Real Raw News published an article claiming that Biden, despite appearances to the contrary, had not set foot in the White House, and was in fact turned away by the U.S. military when he and Kabula Harris sought entry on January 20th that year. Although multiple independent sources confirmed the story, we still questioned its veracity, for if true, it meant that every media organization in the country, including Fox News, was part of the fraud. Sources had said the Biden regime and its media enablers used movie sets and sound stages to mimic White House press events.

A source within Trump’s inner circle confided in RRN that the aide—we’ll call him “Jeff”—was greeted at the White House by the U.S. soldiers who have been safeguarding the Oval Office for either Donald J. Trump or the next “lawful president.” According to our source, Jeff was at the White House on Trump’s behalf to deliver an “extremely important message” to U.S. Army General James C. McConville, who has overseen White House security since Trump signed the Insurrection Act of 1807, which provisionally cedes authority to the military in matters of national security.

“I don’t know the nature of the message, but for Trump to take these steps, it must be of paramount importance. It was important enough to require hand delivery. Trump felt it was too risky to send by email, text, or even discuss on a phone call. It may be a coincidence, but the timing coincides with 40 of his advisors getting raided or subpoenaed by the DOJ,” our source said.

Trump, he added, did not visit the White House himself because he was shadowed by paparazzi, and news of his presence anywhere near the Oval Office would have sounded Deep State alarm bells throughout the Beltway, otherwise known as the Swamp. Trump sashaying up the White House steps, simply put, would be damn conspicuous.