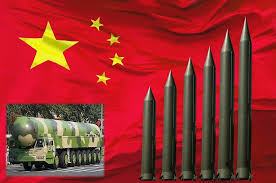 IN the history of global conflicts, one main constant remains: peace through strength averted many incendiary conflagrations — though not all. In other words, its bookend is its mirror image: walk softly and carry a big stick. Understood?

EFFECTIVELY, after world leaders dealt with four years of “The Donald“, yes, even the most reviled came to recognize that he is the only U.S. President to stick to his (patriotic) guns, so to speak, without firing a shot.

IT all flows from there ….

The nation today came closer to nuclear Armageddon than it has since the Cuban Missile Crisis of 1962.

As a State Department C-32—a modified Boeing 757—allegedly carrying Nancy Pelosi screeched toward Taiwan’s Air Defense Identification Zone (ADIZ,) four Chinese Chengdu J-20 5th generation fighters from Huian Airbase scrambled to intercept the intruder, purportedly with orders to destroy the C-32 once positive visual identification had been made. While the J-20s zipped to the Taiwan Straits, U.S. F-35 Lightning IIs from the U.S.S. Ronald Reagan, which had detected the J-20s, pushed into afterburner in hopes of intercepting the Chinese fighters before they could launch on the C-32, a provocative act that could’ve sparked a thermonuclear conflict.

The opposing forces were minutes away from meeting each other in the night sky above Taiwan. The unthinkable seemed inevitable.

But in Palm Beach, Florida, President Donald J. Trump, who had been writing his keynote speech for this weekend’s CPAC conference in Dallas, entered his Mar-a-Lago “War Room” upon learning that a potential battle was unfolding on the other side of the world. As RRN has reported previously, Trump’s Florida command center mimics the technological capabilities of the White House Situation Room: satellites stream real-time data to terminals monitored by Trump’s handpicked staff, and encrypted radio transmissions are captured and deciphered by White Hats who have sworn to uphold the Constitution.

Uncharacteristically, Trump told staff to get Xi Jinping on the line.

“I need to talk to President Xi right now, not in one second,” Trump reportedly said.

“The U.S. and Chinese fighters were less than a minute from merging when Trump implored Jinping to back off his aircraft. President Trump said he could defuse, deescalate the situation without going to war. Jinping prattled on about how he had warned the U.S. that China considered Pelosi a war criminal but gave Trump a chance to explain and ordered his planes to veer away from the combat area,” our source said.

Trump dropped in Xi Jinping’s ears a pair of bombshells, he added. Trump claimed to have proof, which he would later give Jinping, that the person aboard the C-32 was not really Nancy Pelosi but a body double whom the Deep State had sent in her stead. Moreover, President Trump told President Xi that even if the real Nancy Pelosi were aboard the plane, she had absolutely no authority to negotiate with Taiwan on behalf of the United States. Reluctantly, Trump admitted that his invoking the Insurrection Act of 1807 had stripped Pelosi and her Deep State allies of power. The only reason the Biden regime appeared to hold sway over world affairs, Trump said, was because they were empowered by a corrupt mainstream media.

“This is huge. We’ve had many disagreements, but let’s not turn the world to ashes over some bitch trying to pretend she’s still relevant. I will make sure you get proof that what I say is true. Biden might be trying to start a war. Let’s not let that happen today,” Trump told Jinping.

Xi Jinping, our source said, agreed that the world need not end over the American Deep State’s hubris. He recalled his fighters, and the C-32 ferrying a double-masked Pelosi doppelganger landed safely in Taipei.

“ICBMs could be flying right now, but they’re not. Let no one say Donald Trump doesn’t care about the survival and prosperity of the United States, and the world,” our source said.