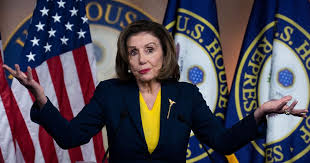 SAN FRAN NAN, akin to the so-called POTUS, Dementia Joe, doesn’t know if she is coming or going. Let’s just call it like it is.

BUT, most significantly, the amount of damage to national security, domestic and foreign-wise, that is, under her interminable tenure is incalculable. Even so, there is way more at stake. Much more.

AND, there is this,

A source familiar with the situation said General Berger delivered the message to his PRC counterpart, Gen. Fan Changlong, during a Saturday evening call in which Changlong implored him to thwart Pelosi’s overseas trip. Changlong said the Chinese State Media’s threat to obliterate any plane carrying Pelosi was not hyperbole.

“We don’t control her, she’s a traitor. You want to shoot her down, then shoot her down,” Gen. Berger said sternly. “If you don’t want her there, call the State Department. Not me.”

But both Xi Jinping and senior PLA officials had already held grueling, unproductive talks with the criminal Biden regime, whose ambiguous messaging only sows public confusion on how it feels about Pelosi’s potential trip to Taiwan. Last week, senior members of the Biden cabal discouraged a Taipei stopover; however, National Security Council coordinator for strategic communications John Kirby said Monday that the Biden administration will support Pelosi on a trip to Taiwan.

In response, Chinese Foreign Ministry spokesman Zhao Lijian said, “We are standing by. Nancy Pelosi’s presence in Taiwan could be considered an act of war.”

And that, White Hats believe, might be the regime’s ultimate goal.

The conclusion seems clear: citizens rally behind leaders in times of conflict.

Biden’s—or his doppelgangers—poll numbers have dropped sharply every day since the stolen 2020 presidential election. He is the most detested leader—albeit a fake one—in the history of the United States. His handlers might be hoping that war—which typically bolsters a failing economy—might turn the tide in the Democrats’ favor.

“General Berger and his council have given this serious thought. If the Deep State is trying to ignite global conflict, it’s taking a huge risk, a risk that also puts White Hats in a precarious situation. The Deep State has no access to the nuclear launch codes, but it does have the ability, the support of enough traitorous military commanders to start a conventional war. We have no way of knowing if China would stick to the conventional. In the end, we have a duty to defend this country—meaning if we were launched on, we’d have to retaliate. God, I hope it doesn’t come to that. Imagine a nuclear war over Nancy Pelosi. How effing crazy is that. The general hates her passionately,” our source said.

Pelosi and General Berger are not exactly strangers to each other, and their animosity is legendary: in January 2021, just before Biden was illegally sworn into office by the traitor Chief Justice John Roberts, Pelosi demanded of General Berger that his Marines safeguard Biden’s inauguration, to which the general replied, “We don’t work for you.”

Subsequently, White Hats in May 2021 tried to arrest Pelosi on charges of treason, but the person they caught was an imposter wearing a Nancy Pelosi mask.

White Hats, in fact, suspect that the real Nancy Pelosi is either holed up at a hotel or sheltered in a Deep State bunker while her body double tours East Asia.

“For whatever reason, the Deep State loves her, feels she’s imperative to their goals. It’s extremely unlikely they’d risk her. We know she has several body doubles. It’s more probably than not that one of those doubles is performing her diplomatic duties. The Taiwanese government isn’t familiar enough with her to tell the difference, “Our source said.

1 thought on “General Berger to China: “Shoot Her [Pelosi] Down!””