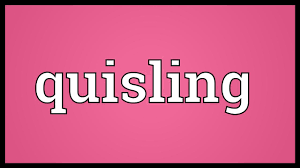 LEST there be any doubt, PM Bennett is an absolute quisling; a megalomaniac to boot!

STILL yet, before we head to his latest betrayal, it is imperative to perform a pin-pointed, very brief comparative analysis, that is, between PM Netanyahu, a/k/a Bibi, and PM Bennett, a/k/a quisling!

WHEREAS Bibi was hardly one to adhere to his right-wing electoral promises, well, in comparison to the quisling, there is no comparison. Yes, while Bibi’s track record hardly lived up to purported right-wing policy-making — instead, straddling a centrist position — the fact remains that he didn’t bow to the left, nor surrender to the enemy within.

IN other words, he pooh-pooed the delusional left, and pissed on the treacherous Islamic minority by weakening their political, barrack-like, bases — unlike the quisling who prostrates before Mansour Abbas, the king-maker in his regime, who functions as the defacto political head of (the Israeli branch) the global Muslim Brotherhood Mafia! Incontestably, they plot, 24/7, against the Jewish majority,

AND so much worse.

Prime Minister Naftali Bennett and UAL party chairman Mansour Abbas met Sunday in the Prime Minister’s Office in their first meeting since the UAL’s governing council instructed the party to suspend cooperation with the government.

According to the report, Bennett and Abbas reached a compromise under which UAL will end its self-imposed suspension from the government, restoring the 60-60 balance in the Knesset.

As part of the deal, Prime Minister Bennett reportedly agreed to some of Abbas’ demands.

The Prime Minister’s Office confirmed that the meeting took place Sunday, but refused to provide details.

Senior UAL officials said that the Bennett government is nearing collapse, but added that their party would not topple the coalition. The officials cited in the Channel 12 report compared the government to a terminally ill patient, saying the coalition is already “in a coma and on ventilator”, but said its dissolution could take anywhere from two days to ten months – referencing the May 2023 deadline for passing the next state budget.

The UAL froze its cooperation with the government in mid-April, citing the insertion of police forces into the Temple Mount, including the Al Aqsa Mosque, to quell violent Arab riots which erupted during the Passover holiday, coinciding with the month of Ramadan.

1 thought on “United Arab List returns to coalition as Bennett caves to some UAL demands – PM Bennett, A Quintessential Quisling!”