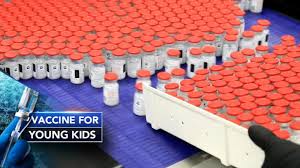 IN a non-Orwellian America, it would be unthinkable to destroy, under any circumstances, a warehouse filled with potentially life-saving pharma products. For heavens sake.

IF anything, such a military mission would be reserved for hidden stockpiles of killer drugs akin to fentanyl and the like. That was then but this is now.

IN reality, as per Moderna in specific, and big pharma in general, they have ceased to be repositories for scientific excellence. Those days are gone. DOA.

IN this regard, the recent KABOOM-LITE should come as no surprise, that is, if folks have been paying attention to the treachery within the so-called life-saving medical-research companies.

ALAS, the above (and so much more) set the stage for the below Special Forces (most righteous) truly life-saving operation! Many more to come ….

According to him, the military learned that Moderna had leased the 20,500 sq. ft. facility in February 2022 and was using it to stockpile clot shots to inject into the arms of babies and especially young children, an unthinkable tragedy that could become reality if Moderna CEO Stéphane Bancel gets his wish. On Thursday, April 28, Moderna asked the Food and Drug Administration to authorize its COVID-19 vaccine as the first vaccine for children younger than age five—that’s 23.6m humans, per statista.com. The FDA and Big Pharma have colluded from day 1, our source said.

“The FDA is subordinate to the pharmaceutical manufactures. In almost every case, the FDA has curtsied to its Big Pharma masters. These vaccines are dangerous and have sickened and killed hundreds of thousands of people in America alone. One warehouse is just a dent, but it’s a start. We had to act,” our source said.

At 2:00 a.m. Saturday, Special Forces approached the warehouse and found it guarded by only two private security guards who lazily walked the perimeter. They were subdued using “non-lethal” force before the SF team disabled the alarm system and cut the two Master Locks on the shipping bay door.

Although the warehouse was climate controlled, the vaccines inside were not stored in refrigerators or freezers; they were bundled in shrink-wrap atop wooden pallets. In fact, the facility had no freezers whatsoever. Moderna’s own literature states vaccines must for safety reasons and stability be kept at 35°F to 46°F. The interior temperature was 55°F.

Special Forces, our source said, was prepared to set explosives but decided instead to “manually demolish” the stockpile.

“We’d expected to find more, a lot more. Intelligence suggested as many as a million vials were at the location. This means intel could’ve been off, or Moderna moved some of its stock in advance. The team leader decided against rigging C4, so they cut the shrink-wrap and stomped, broke, and smashed to pieces every last vial in the place. And since a forklift was in the place, they used it to drive over boxes of vaccines. They were very efficient—in and out in 90 minutes,” our source said.

One victory, he added, does not win a war. The military believes that Big Pharma have leased hundreds or even thousands of similar warehouses in the central United States, locations near shipping and railyards from where the deadly vaccines can be rapidly distributed across the United States.

“Some children can sleep safer tonight, but we’ve a long way to go. They’ll likely tighten security after this, but to us that’s not a deterrent,” our source said.