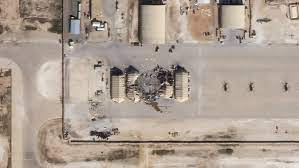 WITHIN the Mid-East jungle there is one overriding rule, actually, it is deemed the “law of the land”: “Strong horses’ rule!”

TRENCHANTLY, like night follows day, if not adhered to, death and destruction is, in no time, guaranteed to explode. Never forget this well-learned and meticulously documented (free, too) strategic advice —  from someone who has professionally waded in the Islamic cesspool for over 2 decades and living in Israel for 14 years, the flash-point (and heart) of the always fiery Mid-East.

AS such, in the run-up to the possible installation of the radical left’s (globalist-driven) puppet, namely, Joe (Brandon) Biden, the following analysis took center stage at Israel National News, Jan. 11, 2021:

AND while freedom-loving American citizens (alongside others worldwide) watch in horror at the destruction of  their beloved homeland — the heretofore greatest experiment in a Constitutional Republic — that is, due to the criminal actions of the Biden regime, well, the actual wreckage wrought by The Thief-in-Chief’s flight from Afghanistan (with the monstrous hand-over to the Taliban) demonstrated that the foreign policy realm was hardly safe from the deep state’s clutches! This is so, atop the coddling (and collusion) of the treacherous and murderous CHI-COM regime.

IN this regard, no one should be shocked, shocked that the barbarians ruling Iran let loose a barrage of ballistic missiles on the U.S. Army Base in Iraq! Indeed, had they not done so, that would have been the shocker! Mind you, this comes on the heels of the regime’s give-a-ways, yes, rewards, to the world’s foremost sponsors of Islamic terrorism via the so-called nuclear negotiating pow-wows. Again, weakness begets terror and more terror.

YES, a (deliberately) weakened America is, rightfully, viewed as a paper tiger, unlike when President Trump — viewed as an absolute “strong horse” throughout the red-green axis of terror — kept the foreign (and domestic) monsters at bay.

INCONTESTABLY, ALL TOGETHER NOW:

On Saturday, multiple rockets struck a US Army base in Erbil, Iraq, according to reports.

The attack was confirmed by US officials, who reported there were no casualties. Officials are now looking into the matter with the government of Iraq and the Kurdish Regional Government, according to Axios.

Another video of the explosions that occurred in Erbil. pic.twitter.com/hm1dBotKUr

The health minister of Kurdistan stated that there were civilian no injuries or deaths reported in the attack, and Erbil’s Governor Omed Khoshnaw confirmed that “at least five ‘Iranian-produced ballistic missiles’” struck the city in the dead of night, according to the Daily Mail.

He said it was not clear whether the missiles were targeting the American consulate at the site, or the airport in the city.

The missile attack comes as Biden’s negotiations over the Iran nuclear deal have stalled as both sides struggle with the current situation unfolding in Ukraine.

Although the rockets came from Iran, no group has taken responsibility for the attack as of yet, it is unclear what effect, if any, it will have on negotiations.

No party has taken responsibility for the missile fire as of yet. Iran has threatened retaliation in recent days for the deaths of two Islamic Revolutionary Guard Corps (IRGC) officers in an alleged Israeli airstrike in Syria last week.

Iran-backed militias reportedly targeted the Al-Tanf base, where US forces are housed, in October in retaliation for an alleged Israeli airstrikes which targeted Iranian-backed forces in Syria last year.

The Biden administration announced this week they would start importing oil from Iran.

This is a developing story. Check back for updates.

1 thought on “BREAKING: Multiple ‘Iranian-Produced Ballistic Missiles’ Rain Down on US Army Base in Iraq – Days After Biden Announced Plans to Buy Iranian Oil (VIDEO)”