CALLING ALL Doubting Thomases’: The Gateway Pundit, the most trusted news site — from time to time, given a thumbs up by President Trump; widely read by millions-strong MAGA folks; causing severe agita, as a blessed knock-on effect, among the Mockingbird Media, political class, and cheered on by the anti-American crowd — jumped on RRN’s bandwagon. Got that??

AND while it is heartening to know that they, too, have arrived at the same investigative conclusion, well, it is just the icing on the cake, so to speak. For this address never had any reason to doubt what’s really what — as detailed within RNN — as per the overall claims.

BESIDES, the more the deep state’s mouthpieces scream conspiracy, conspiracy, as pontificated (supposedly, “fact-checked”) by the DemonRat’s funded PolitiFact,

There are no US-run biolabs in Ukraine, contrary to social media posts …..

See the sources for this fact-check
Russia’s invasion of Ukraine has brought false claims on social media that Russian President Vladimir Putin is targeting U.S.-run biological weapons labs in his neighboring country.

False claims from Russia alleging bioweapon use by the U.S. aren’t new, and allegations of a network of such labs along Russia’s border were shared in state-run media in the weeks before the invasion.

A Twitter user by the handle @WarClandestine spread a story on Feb. 24 that Russia was targeting the sites of U.S.-run biolabs when it began invading Ukraine. That account was quickly suspended by Twitter, but others shared the post and began using the hashtag #USbiolabs to spread the false claim.

There are no U.S. military-run labs in Ukraine, said Andy Weber, a member of the Arms Control Association Board of Directors and a former assistant secretary of defense for nuclear, chemical, and biological defense programs.

“Rather, the U.S. Department of Defense Cooperative Threat Reduction Program has provided technical support to the Ukrainian Ministry of Health since 2005 to improve public health laboratories, whose mission is analogous to the U.S. Centers for Disease Control and Prevention,” Weber told PolitiFact.

“These laboratories have recently played an important role in stopping the spread of COVID-19,” he added. 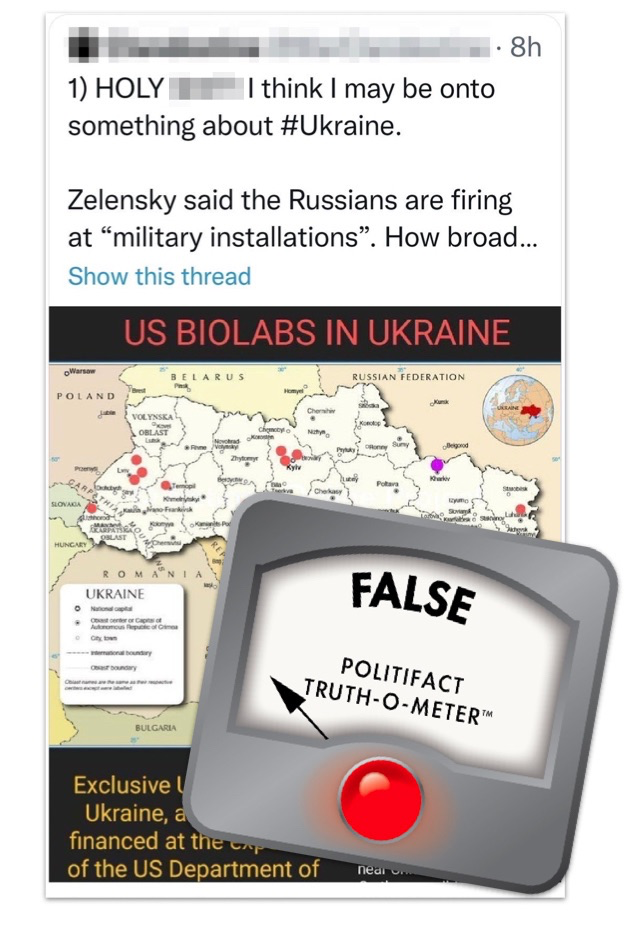 False allegations about biolabs, though, are so prevalent that the Defense Threat Reduction Agency released a video on Jan. 11 to counter them and explain what the Cooperative Threat Reduction Program does. In it, Chris Park, a State Department official, spoke at the United Nations to respond to allegations from China and Russia about “suspicious activity” at laboratories in the region. He called the claims “pure disinformation.”

Park said the program “works to build capacity around the world to detect, prevent and mitigate infectious disease.”

The Biological Threat Reduction Program, according to the U.S. Embassy in Ukraine, “works with partner countries to counter the threat of outbreaks (intentional, accidental or natural) of the world’s most dangerous infectious diseases.”

According to the Atlantic Council, a think tank, Russian propagandists have long spread propaganda in Ukraine, including claims that these labs are experimenting on unsuspecting citizens.

Snopes fact-checkers reported that this most recent claim is false.

Similar claims were made against Georgia’s Lugar Center for Public Health Research in 2018, according to the Bulletin of Atomic Scientists. Last year, Russia and China began spreading the false claim that the U.S. has biolabs along each of their borders, insinuating that America is responsible for unleashing COVID-19, the Daily Beast reported.

A social media user tweeted that Russia was targeting U.S.-run biolabs in its invasion of Ukraine. That account was soon suspended by Twitter.

There are no U.S.-run biolabs in Ukraine. The country is one of many former Soviet Union republics, and other countries, partnering with the Defense Department as part of the Cooperative Threat Reduction Program. It’s the latest claim in a series of disinformation efforts by the Russians, an expert told PolitiFact.

While the U.S. may provide funding to upgrade or build labs in other countries, the labs are run by the partnering nations and the program’s goal is to prevent biological threats, not create them. We rate this claim False……

SO, it is up to those of us value truth, come what may, to stand tall. To resist, resist!

IN this regard, the above so-called fact-checking has already been proven to be demonstrable lies at several links within, but this one should suffice as a due diligence backgrounder.

The Director of the Information and Press Department of the Ministry of Foreign Affairs of the Russian Federation, Maria Vladimirovna Zakharova,  told the United States on Wednesday, “We have found your biological weapons!”

“There was statement made by the Deputy Secretary of State Victoria Nuland, leave no doubt, will not give Washington to be silent this time. Their attempts, while spilling blood, to find biological and chemical weapons throughout the world. We have found your own products. We have found your biological material. As it turns out it was all happening in Ukraine,” RT, Russia state-affiliated media reported.

Russia now demands the US to explain bio labs in Ukraine.

Russia accused the U.S. of violations of the 1972 Biological Weapons Convention and has covered it up.

This comes after State Department official Victoria Nuland admitted in her testimony on Tuesday that the US has biolabs in Ukraine.

On Tuesday, the official spokesman for the China Communist Government confronted the United States on its 336 biological labs in 30 countries around the world. According to China, there are 26 US biological labs in Ukraine alone.

Our notes: The GWP has a lot right, but is obviously unaware the Putin has already shelled and destroyed confirmed labs in Ukraine.

RRN is an independent publisher that relies on reader support. We fight for truth and freedom of the press in an oppressed society. We use GiveSendGo, a Christian-based fundraising company, through which to collect donations. Please do not give your hard-earned money to sites or channels that copy/paste our intellectual property. We spend countless hours vetting, researching, and writing. Thank you. Every dollar helps.