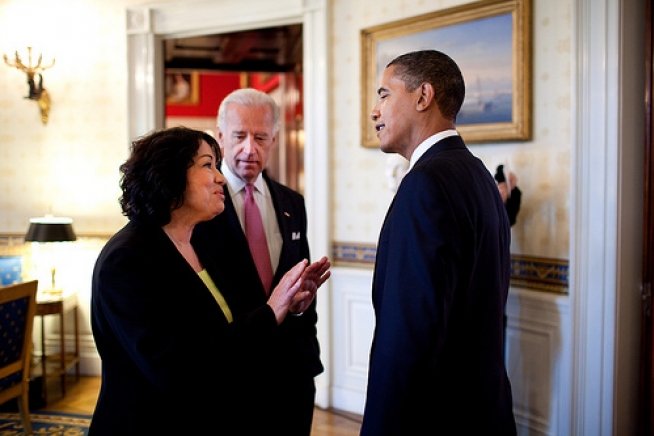 LITTLE shocks, shocks at this end, that is, with a full-on understanding of said truth: the higher up the food chain they ascend, the more corruptible they are, and the more secrets they have to hide. Of course, there are honorable exceptions.

AND when it comes to Justices on the Supreme Court, well, more than a few outings have made an appearance at these pages. Most dishonorably,

NOW that that is firmly established, it came as no surprise that the over-fed, mannish-looking, radical-bent Sotamayor joined the corrupt club. Even so, JAG’s pursuit peels back much more than “garden variety”, pay-for-play. Wait and see.

“We established, conclusively, that the financial transactions took place. I can’t disclose how because it would, you know, help them avoid getting caught in the future. Still, we had to prove she took the money in trade for promising to do everything in her power to enforce masking and vaccine directives. We made the connection, and how we accomplished that will come out a trial,” our source said.

As JAG dug deeper, it discovered that Sotomayor’s palms had been greased by yet another DNC whale, Reid Hoffman, an American internet entrepreneur, venture capitalist, podcaster, and author. The co-founder of Linked-In, Hoffman’s estimated net worth hovers at $2bn. He has financially backed many Deep Staters such as Joseph Biden, Gretchen Whitmer, Pete Buttigieg, and Bill DeBlasio. In April 2021, he added Sotomayor to his list of beneficiaries, to the tune of $625k.

“He wrote the cash off as a ‘consulting fee.’ Consulting for what? And she declared it as the same. But she never mentioned these revenues, if you can call them that, on her most recent financial disclosure statements, what SCJs must file each year. Again, we now have hard evidence she took his cash to promote mandates,” our source said.

Moreover, he said JAG procured an email Sotomayor had sent to Dr. Anthony Fauci on Thursday, January 6. “You know, Tony, I’ll do everything in my power to ensure the current mandates stay in place, as per CDC guidelines,” were her words. The next day Sotomayor made a significant false claim about Covid’s impact on children, saying at a congressional hearing that over 100,000 American children were hospitalized and critically ill with Covid-19, an assertion so outrageous that even her Deep State allies had to rebuke it.

“We don’t believe she just accidentally said 100,000, but she definitely jumped the shark in proposing the absurd figure. Had she lied and said 10,000, no one would’ve blinked an eye. She zestfully got carried away. She had no legitimate reason for corresponding with Fauci, though, and it’s a direct conflict of interest. Bottom line is she committed treason, and that’s why JAG was compelled to act,” our source said.

ASAP came in the predawn hours Wednesday, when an unspecified number of U.S. Marines breached her lavish D.C. condominium after disabling an alarm system and ensuring she was home alone, as intelligence had shown. Sotomayor was reportedly asleep in bed when Marines subdued her using non-lethal force.

“Essentially she was gagged, zip tied, and put in a civilian vehicle, an innocuous-looking van, for transport to a processing center. Make no mistake, she’ll soon be headed to Guantanamo Bay,” our source said.