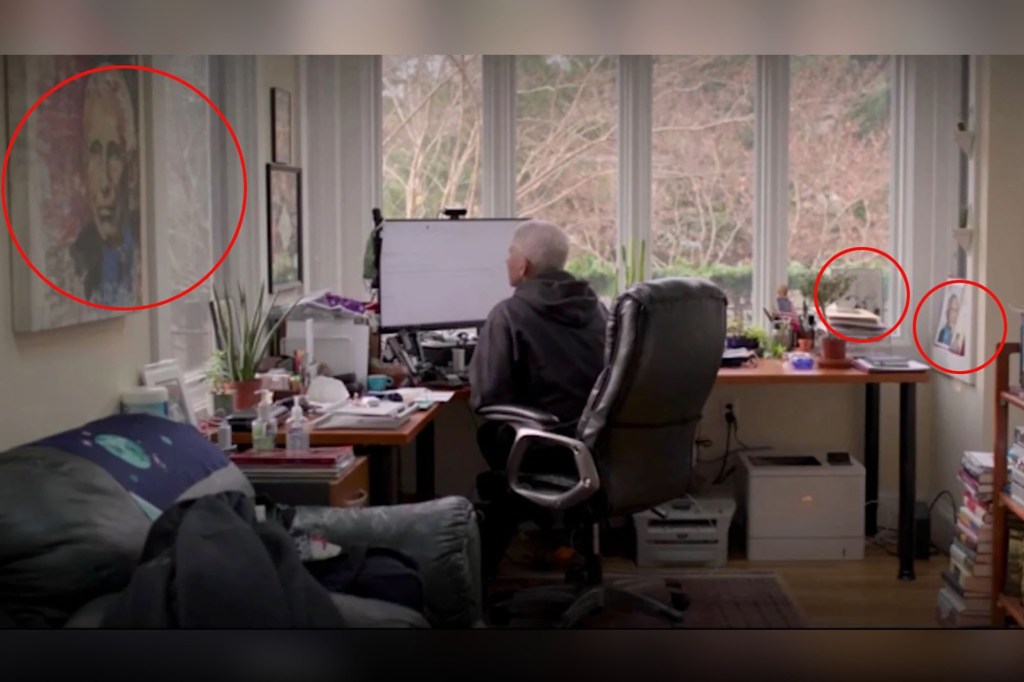 (creepy self-worship … bobble-head of himself overhead!)

ANYONE who hasn’t slipped into a coma (over the past two + years), well, realizes that Dr. (Death) Fauci is not a healer. To the contrary. This octogenarian, over many decades, has evolved into a ghoulish monster — the most highly-paid one in the Federal government, at that! One may rightfully add, yes, an overcompensated whore, too.

AND as ghouls, whores, and overall monsters are wont to do, the aforementioned never, ever ceases to plot devilish plans. Naturally, partners-in-crime are never far behind — oftentimes, scheming this and that at posh locales!

BUT have faith. in due course, JAG operators will ensure that Fauci reaps the whirlwind, in a manner of speaking.

UNTIL then, read on,

He recommended that Democrat lawmakers relax mask mandates until the midterms.

Now, the Deep State doctor has added a new field of expertise to his seedy resume—advocating for stricter gun control legislation and repealing the 2nd Amendment.

Last Friday a cabal of freedom hating despots that included the likes of Fauci, Kamala Harris, Rochelle Walensky, and Alejandro Mayorkas met clandestinely in a conference room at the Four Seasons Hotel in Baltimore, an odd venue for a government conference. There, they discussed ways of capitalizing on the plandemic to deprive law-abiding citizens of the right to bear arms, either through legislation or executive action.

An administration whistleblower who viewed a meeting transcript told Real Raw News that Fauci, the most vocal of the group, drew a direct correlation between the plandemic and a marked increase in gun-related suicides.

“If we follow the science, we see a 500% increase in firearms fatalities, especially young people committing suicide, over the last three years. We can’t stop the disease, but we can stop people from owning guns, we’ve just lacked the resolve to do it. If science says pandemic depression is causing people to take their lives with firearms, then we must follow the science and remove firearms from the equation,” Fauci explained early in the meeting.

His statement elicited a round of applause, with Harris rising to her feet and vigorously clapping her hands, while Mayorkas, a Deep State stooge to be sure, seemed to play devil’s advocate.

“Pandemic or no pandemic, we’ve for decades tried to get guns out of the hands of citizens. Clinton tried. Obama sure as hell tried. Sadly, the U.S. is not Australia. And now we’re encouraging our constituents to ease up on mandates, and that’ll reduce pandemic depression. I’m sure the numbers will show a reduction in the number of gun-related suicides in the coming months,” Mayorkas said.

“Not according to science,” Fauci countered. “Masks are coming back, regardless of midterm results. Science immutably shows that another Covid variant even more transmissible than Omicron and deadlier than Delta will surface in November, probably right after the midterms. We’ll be reinforcing mask mandates and lockdowns, which will again increase the percentage of gun-related violence and suicides. Science doesn’t lie,” Fauci said.

“I agree with Anthony,” Rochelle Walensky said. “I’ve been getting calls from Kathy [Hochul], and she’s not happy at all about people not wearing masks.”

The meeting, our source said, lasted approximately two hours and ended with Fauci giving what must have been a 10-minute lecture on the merits of aggressive firearms legislation. His homily was akin to an invocation. In the midst of soaring hyperbole, with a period or semi-colon nowhere in sight, Fauci exhorted, beseeched and finally begged his comrades to endorse abolishing the 2nd Amendment, all in the name of “saving people from killing themselves with guns during the pandemic.”