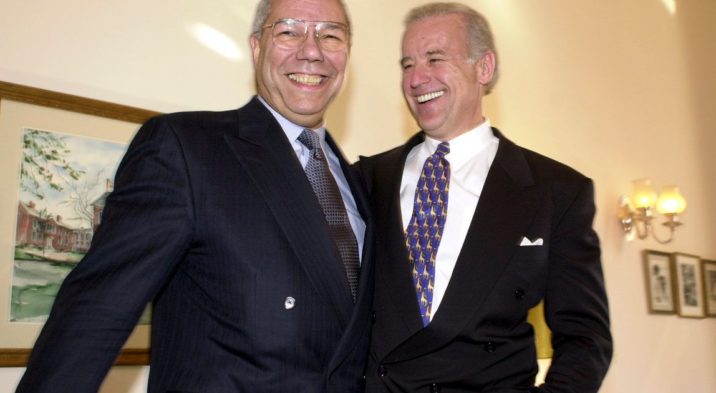 THERE is little lower than those who exploit another’s death for propaganda purposes. Said action is not only despicable at its core, but worthy of absolute condemnation, regardless of ideological divides. Simple as that.

BUT, then again, when it comes to those who believe that the ends always justifies the means, well, nothing is sacred — even death. Couple the aforementioned with the present-day mindset, namely, “never let a good crisis go to waste“, it was a no-brainer to create this and that spin — despite the attendant hagiographies — by conflating his death with covid!! Evil.

CLEARLY, the death of a man who was admired across the political spectrum couldn’t go to waste, that is, covid-wise. Still yet, few have a clue as to Powell’s sell-out to the deep state. Yes, all was not as it seemed.

Wow! President Trump Releases Statement on Colin Powell – Does Not Hold Back

INDEED, the reportage of “death by suicide” would hardly be a useful tool for the regime. Not only that, in the most cynical way possible, surely, it wasn’t hard to convince the family, that is, in their bereavement, to go along. After all, how would it look for the legacy of a warrior to mark his end by suicide — that which is often synonymous with cowardice?

ALL of which segues into the real facts surrounding Powell’s demise, lies be damned.

The disreputable, faux Biden administration and its media cohorts have perpetrated yet another fallacy on the American public by claiming that Colin Powell died of “Covid-19 complications” despite being fully vaccinated. Although breakthrough infections that result in death are becoming more common and broadly reported by alternative media, Colin Powell had never received a positive Covid-19 diagnosis or displayed symptoms commonly associated with the China virus, said an administration whistleblower speaking under promise of anonymity.

The administration and the media have released scant details on his death, obfuscating both where he died and the approximate time of death, but were quick to blame his demise on Covid-19.

“Powell died at home after consuming a bottle of prescription sleeping pills,” he said.

According to him, Powell’s wife Alma awoke at 3:00 a.m. and noticed that her husband was not breathing. She discovered an empty bottle of Ambien, which had been nearly full the night previous, tucked amid the bedsheets.

“Alma called 911. She said the bottle was almost full because Colin had filled it only a few days ago. 911 routed the Call directly to the White House, which has never been heard of. No paramedics, no ambulances showed up at his McClean, Virginia, home—only the FBI,” our source said.

Two FBI Special Agents and an agency forensic pathologist arrived at the Powell’s residence shortly after 4:00 a.m. They found Mrs. Powell in a state of hysteria, screaming and crying at the top her lungs as she hovered over late husband’s corpse. After a thorough examination of the bedroom, one agent found what appeared to be a suicide note on the floor beside the Powell’s bed.

“I’ll love you always, Alma, you and the children. But I am old and sick, and I know they’ll find me soon, like they have the others. I don’t want my legacy to end that way. I pray you can all forgive me, for what I’ve done, and now what I no longer have to do. The man in the glass tower must not rise. I place myself in the Lord’s hands; I’d rather He judge me than them,” part of the note purportedly read.

Powell, who had identified as a Republican, was a RINO—Republican in name only. He was an outspoken opponent of Donald J. Trump, and he had endorsed both Hillary Clinton and Joe Biden’s bids for the presidency.

“The FBI made a call directly to Kamala Harris, and she told them they’d have to spin the death to make it appear as if he died from Covid,” our source said. “The FBI is a tool of the Deep State.”

The administration and the CDC have been instructing health institutions and city and county coroners to falsify death certificates to make it seem as if every human fatality over the last two years was a result of Covid-19.

2 thoughts on “Colin Powell Committed Suicide – All Is NOT As Reported! + Wow! President Trump Releases Statement on Colin Powell – Does Not Hold Back ”