AT this highly dangerous, Orwellian juncture in time, many living in America (outside its borders, too, are wondering: what the hell is going on??) feel as if they have been (purposefully) pushed down a rabbit hole and dropped into an alternative universe, yes, viewing daily life through a looking glass. Alice in Wonderland-like. Significantly, that’s a mild descriptor of the distorted goings-on and the mockingbird’s media part in it.

EVEN so, instincts and smarts alone won’t turn the tide, at least, when it comes to thwarting the nefarious plans that the deep state implanted for America’s downfall, that is, the “transformation” (do recall when that word was first introduced into the political landscape, yes, as a talking point and goal) of the heretofore leading nation of the free world into a Marxist/socialist/communist hell-hole via a combination thereof. Inexorably, said chaos will ripen the stage for the GREAT RESET!

AND this is where the political weaponization of “all things covid” veer into sharp focus, with full, painful relief — even though the actual science is not supportive of lock-downs, masks, and the mRNA based vax!!

CONSIDER more proof of the same:

ALL of which track-back to a multi-tiered level of anti-freedom force multipliers within America in specific and the wider west in general; unarguably a concerted effort to maintain and exert maximum power and control, covid vax toxicity, etc. be damned!

BUT never mind. Doubting Thomas types don’t have to believe the charges at hand, that is, as if they are the gospel truth and derived from Moses on Sinai, in a manner of speaking. No offense will be taken. On the other hand ….

Dr. Robert Malone, M.D., M.S.,, a distinguished physician who discovered RNA transfection and invented mRNA vaccines, was on Steve Bannon’s War Room Weednesday with some alarming news–new data indicates that people who have taken the Pfizer and Moderna vaccines are at greater risk of getting Covid than someone who is not vaccinated.

Before you watch the video, you need to understand the term–Antibody-Dependent Enhancement aka ADE:

According NBC reporting (I can’t believe I’m citing that outfit as a reliable source):

Dr. Malone has warned of this risk for several months. What are we to do? Malone says that instead of relying on the flawed vaccines, Doctors should use drugs for treating Covid that have proved effective, such as Ivermectin (more about that following the video), is neutralizing Covid:

What should scare the hell out of you is the extraordinary efforts being taken to silence and discredit Dr. Malone. I encourage you to read Michael Haynes piece from July 5, which details Malone’s Kafkaesque ordeal. Here are some relevant paragraphs from his article:

Information about the inventor of the mRNA technology used in certain COVID-19 vaccines was removed from the online encyclopedia site Wikipedia after he publicly warned against giving the experimental gene therapy vaccines to young people and that there was insufficient information about the injections to give informed consent. . . .

On June 10, 2021, Dr. Malone joined biologist Bret Weinstein, Ph.D, on the Dark Horse Podcast, where Malone raised numerous safety concerns about the Pfizer-BioNTech and Moderna COVID-19 vaccines, both of which use mRNA technology. He warned about future autoimmune issues caused by the spike proteins within the mRNA injections.

This is the kind of authoritarian censorship carried out by Adolf Hitler, Josef Stalin and Pol Pot. When the media and the Government conspire to quash dissenting opinions and legitimate, provable facts, we have crossed the threshold of fascism.

The same effort to discredit Dr. Malone also has been unleashed against non-vaccine treatment methods. Remember what happened to anyone who dared suggest using Hydroxychloroquine or Ivermectin?

And do you remember the news stories in May about how Covid was devastating India? I bet you have heard little about the efficacy of Ivermectin in stopping Covid in Dehli. 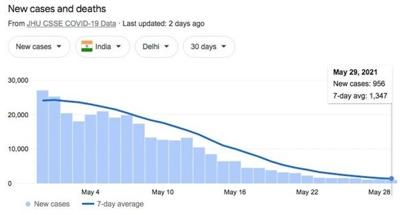 Dr. Pierre Kory told the world on December 8, 2020, that Ivermectin “obliterates” this virus. Obliterate means to decimate, demolish, or annihilate. It means to eliminate or destroy all trace, indication, or significance.

This graph shows that Ivermectin, used in Delhi beginning April 20, obliterated their COVID crisis. No one should be able to talk you out of this – not a salesman, a drug company, a television celebrity doc, and certainly not the top doctor for the WHO or the NIH who is paid to do that.

It is your duty as an American to challenge and question everything the Government represents as true. We now have concrete evidence that Dr. Anthony Fauci has taken diametrically opposed positions without blinking an eye. Some call that “lying.” The same with the CDC (as I pointed out in my last article).  Perhaps the CDC should be renamed the Center for Disinformation & Confusion in light of the contradictory guidance issued regarding masks and vaccines.

Unfortunately, the chaos of Biden’s Covid policy reflects the dysfunction and incompetence evident in the rest of his Administration. Keep praying and continue to resist.