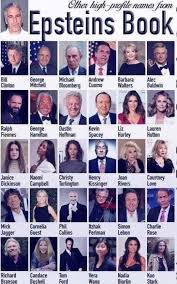 AS always, the truth shall set you free! Yes, strange as it may seem at this gravely dangerous national juncture, the introduction of a childhood diddy (more than) bears mentioning: “sticks and stones may break my bones but words will never harm me.” Indubitably.

IN other words, the closer doubting Thomases, aka conspiracy theorists, get to the bottom of the deep state’s cesspool(s), well, the more hysterical their operatives become. Not for nothing. This is so because it involves the exposing of every heinous crime imaginable, most acutely, treason AND child trafficking!

AS such, isn’t the timing rather ‘convenient’ that a volume, as opposed to a trickle, of poop and scoop is pouring forth, that is, relative to “Slick Willie’s” military tribunal at GITMO and Maxwell’s naming names??

……Vice Adm. Hannink responded by producing a dozen images, which he showed the tribunal, that clearly showed Bill, Jeffrey Epstein, and Ghislaine Maxwell engaging in sexual activity with underage boys and girls.

“Indeed she has. She told us how, after molesting them, you would openly threaten to kill them and frighten them out of their minds, then strap them down to gurneys and draw blood to convert into that adrenochrome concoction you people seem to love so much. She told us how you had erectile dysfunction, and that chronic use of conventional ED meds eventually made them useless. But you got newfound vim and vigor from Adrenochrome,” Vice Adm. Hannink said…..

IPSO facto, if 1 + 1 still = 2, strap on tight: it is neither accidental nor incidental that truths, horrendous as they are, finally, are bubbling to the surface — DUMBS and all!

SO, it is along this trajectory of truth-telling that this Epstein Doc (dated, August 9, 2019) should be examined, you know, Maxwell/Clinton-wise — as a supplementary exhibit to the below, as well as to all of the above. Still yet, misdirection is always in play.

(Compiled list of names from Epstein’s Island flight logs from the first 200 pages of 2000+.)

● Bill Clinton took a helicopter with Maxwell and Epstein