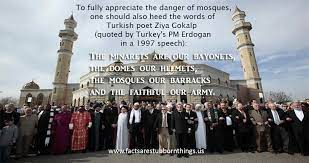 Police forces searched a mosque in the city of Lod, the sight of rioting in the past few days, and found a cash of firebombs ready to use and a supply, petrol and rocks.
After Police who along with the local Imam searched the mosque, found the cache in the attic and said it was there for use when rioting resumed.]

MOSQUES world-over, so-called houses of worship, first and foremost, are epicenters and incubators for Islamic jihad via Sharia Law. Literally.

AS such, it is not for nothing that Allah’s warriors are behaving true to form, once again, that is, waging jihad in Israel through actual Koranic teachings and incitement(s) stoked within mosques! If anything, it would be an absolute anomaly if this wasn’t the case.

IN no uncertain terms, both the above and below provide a volume of evidence re the truthful charges at hand. Bullet-proof.

Nadav Argaman, Director of the Shin Bet Security Service, took the bull by the horns on Friday. He announced that instead of treating the outrages as “civil war”, they were in fact no better than “terrorism” in every respect. He was therefore making available his organization’s intelligence capabilities, tried and proven against Palestinian terror, for pre-empting violent outbreaks before they occurred and identifying the troublemakers. They would be detained, investigated and put on trial, he vowed, and the disturbances brought to an end.]

In the city of Lod, the violence has continued virtually unabated over the past few days, despite an enhanced police and Border Police presence, and a nighttime curfew.

In a new and disturbing development, Arabs from the eastern part of Jerusalem have been arriving in Lod to bolster the local community and join them in perpetrating acts of violence on the city’s Jews.

Far from calling for a cessation of violence, as many Jewish leaders have done this week, Lod’s so-called spiritual leaders in the city’s mosques are openly preaching incitement and encouraging their followers to continue in the path of bloodshed. Entirely absent from their religious propaganda has been any suggestion that civilians, at the very least, should be spared.

One speech, given by a visiting Muslim preacher, was recorded by local residents and widely disseminated. The words he spoke were deliberately crafted to stoke the flames in Lod.

The preacher continued: “And so, servants of Allah, Allah has given you the privilege of defending the honor of this city. Allah has made you great and multiplied your praises. He has given you this privilege when the first shahid [martyr] to fall was one of you, a shahid who fell in the cause of the blessed Al-Aqsa mosque. We proclaim that the Al-Aqsa mosque will remain our mosque and that no Jew has the right to set foot inside it and not even in the dust outside it, even if they kill a shahid every single day!”

The preacher’s words were punctuated by shouts of “Allahu Akbar!” [Allah is great] from the crowd listening.

“The mosque will remain in Muslim hands only! Even if they claim another shahid every single day! But why did the shahid fall? Why was he killed and why did he give up his life? He died for one reason – because in this city, a gang of terrorists rules, a gang of destroyers, a gang of criminals.”