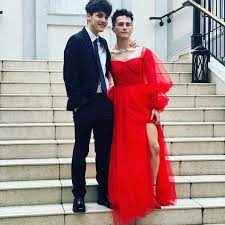 THE wrecking balls overtaking and consuming the nation are multi-faceted and too numerous and unwieldy to count. Headache-inducing. Even so, a central component involves the actual transformation, yes, transformation, of biological fact: two genders, that is, male and female. After all, what the hell does biology have to do with gender-assignment, when living in a dystopian universe?? Imagine that.

IN this respect, it is a dirty secret that their full-on thrust towards transgender-ism-at-all-costs has little respect for the countless, highly confused, mentally unstable, clueless victims; those whose very lives have been torn to shreds. Literally.

‘I wish I could go back’: Girl voices heart-wrenching trans testimony

A Tennessee man who was the CEO of a Tennessee-based telemedicine company was fired after a video went viral that showed him criticizing a teenage boy who wore a red dress to senior prom.

While gathering for pictures before the Franklin High School prom on Saturday, cell phone video showed Sam Johnson, the now-former CEO of VisuWells, confronting Dalton Stevens, a high school senior who was wearing a floor-length red dress with a thigh-high slit.

Stevens told WKRN-TV that Johnson used “slander terms” against him.

“I very much view clothes as genderless,” Stevens later told WKRN. “I was very confident. I knew that I felt beautiful, and I felt great.”

The company released a statement Monday announcing that Johnson had been terminated. The company also said it would announce “concrete steps” within the coming weeks to show its support for the LGBT community.

We unequivocally condemn the behavior exhibited by Sam Johnson in a recent video widely circulated on social media. After investigating the matter and speaking to individuals involved, the VisuWell Board of Directors has chosen to terminate Mr. Johnson from his position as CEO, effective immediately. Gerry Andrady, our President and COO, will lead the company through this important time.

VisuWell’s culture emphasizes respect, kindness, and compassion, especially for those from traditionally marginalized communities, and we maintain a zero-tolerance policy for intolerance of any kind. Mr. Johnson’s actions contradicted the high standards we set for ourselves in promoting the health of those who use our platform.

We share the concerns that so many have expressed on this matter and look forward to announcing concrete steps we are taking in support of the LGBTQ community in particular over the coming weeks.

The company was later forced to release a second statement clarifying that Johnson is no longer associated with the company in any way after critics claimed the initial statement did not “acknowledge whether [Johnson is] still an employee.”

The second statement read, “In response to those asking for additional clarity on Sam Johnson’s termination as CEO, we can confirm that Mr. Johnson is no longer employed by VisuWell in any capacity. He no longer has a position on the Board of Directors or any informal advisory role. His behavior was not representative of our values, which include respect and compassion for all.”

What did Johnson say?

Johnson told Newsweek the video was deceptively edited and did not tell the entire story. He explained that he only interacted with the teenagers to ask them to tone down their “obnoxious, loud behavior” outside a restaurant.

Johnson said the incident “wasn’t anything personal or involving a dress.”

“We had just sat down for dinner at this restaurant that we frequent, and I was returning from the restroom when I was presented with their loud cursing,” Johnson told Newsweek. “Making it about the dress was their idea and they edited out most of the exchange.”

1 thought on “CEO Fired After Confronting Teenage Boy Who Wore Red Dress to Prom — But He Says That’s Not the Whole Story – RADICAL LEFT’S PURPOSEFUL DECONSTRUCTION OF BIOLOGY! [VIDEO] By Adina Kutnicki”