Time and again, this investigative journalist and Islamic jihad expert has drawn a clearly defined and distinct parallel between the tactics — be they propaganda-wise or via explosive warfare devices — deployed by red-aligned terror groups and their Islamic jihadi brothers and sisters in arms. Most recently, its basis can be found here.

More pointedly, it is this accelerating nexus which is the raison d’être of this site.

America’s Civil War Rising (ACWR) educates and warns the public about the growing threat of Islamic sleeper cells in America and the unholy alliance forged between Islamic terrorist front groups and fascist communist factions. This has erupted in a violent ideological clash against those who cherish the values and ideals inherent in American exceptionalism and our Constitutional Republic. Under the guise of “resistance,” the so-called “progressive” left has called for an all-out civil war!

With the above in the forefront, it is no wonder that ANTIFA — yes, no doubt, with the support of its global arm, in tandem with BLM and associated domestic terror appendages — stepped-up, in warp speed, a highly effective guerrilla-style, takeover tactic. Mind you, not unlike the operations deployed by their torchbearers, the Weathermen and the Black Panthers, in the 1960’s and 1970’s, so too their “students” are following in their revolutionary footsteps to “Bring Down America!”

Most significantly, what this highly dangerous coup — indeed, it is — in Seattle portends couldn’t be any more transparent, that is, as per its knock-on effects to wholly-controlled Demster cities across the nation. Heed this warning: It dare not be treated as the “antics” of petulant children, hell-bent on “acting” out. Rather, it must be viewed for what it is: A staged, highly-organized, fully-funded insurrection — that which will not remain “localized.” In reality, said guerrilla takeovers spread like cancers!! Take it to the bank…..

Just as the Islamic State (ISIS) claimed territory in Iraq and Syria, antifa militants have claimed territory in Seattle, Wash. According to reports on the ground from The Post Millennial’s Andy Ngo and Townhall’s Julio Rosas, protesters and antifa instigators have seized land in the Capitol Hill area around the Seattle Police East Precinct. Like ISIS, the rioters appear to have decided on setting up a government in their occupied territory, naming it “Free Capitol Hill.”

His message included tweets from rioters and pictures of the “Free Capitol Hill” poster on the side of a barricade, along with a map of the area antifa had taken over.

“The Capitol Hill Autonomous Zone. Folks in Seattle have secured six block of city [at the moment], barricaded it, and gotten local businesses and residents to agree to, well, disaffiliate from Seattle basically. It’s a flux state in the making,” Alex Humva tweeted.

“Speaker at the autonomous zones advocating folks with firearms take shifts defend the barricades. Sh*t is getting organized,” another inside the barricades tweeted.

Racism Karen Harasses ‘White Neighbor,’ Says Dismantle Racism or ‘GET THE F**K OUT’

The antifa rioters appear intent on creating an automonous state, not unlike the ISIS-run territories in the Middle East or the surrounded proto-communist experiment of the Paris Commune in 1871. (The Paris Commune was a key moment in the history of socialism and communism. It lasted between March and May 1871, after the Prussians had defeated the French in the Franco-Prussian War and were besieging Paris. Karl Marx called it an example of the “dictatorship of the proletariat.”)

The rioters’ use of the Greek term “Stoa” appears to hearken back to classical Greece while their reference to police as the “regime” sets them in contrast with a supposedly oppressive government force. The map has an undeniably bohemian theme, promising a “coffee bar” in this militant alt-Seattle.

Julio Rosas also reported from the scene. “I’m outside of the Seattle Police Department’s East Precinct for [Townhall]. Police have pulled out of the area and protesters have set up barricades in the streets. They have declared it a ‘Cop Free Zone,’” he tweeted.

Rosas also shared posters with demands from the rioters. “Some of the signs posted around the area. One calls for the defunding of the Seattle PD and the dropping of all charges against protesters,” he tweeted. “Another says, ‘The cops will always be racist because capitalism requires inequality.’”

Some of the signs posted around the area. One calls for the defunding of the Seattle PD and the dropping of all charges against protesters. Another says, “The cops will always be racist because capitalism requires inequality.” 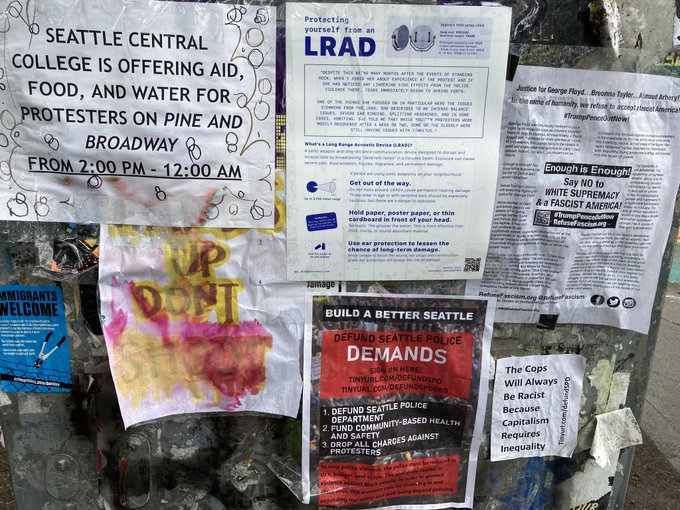 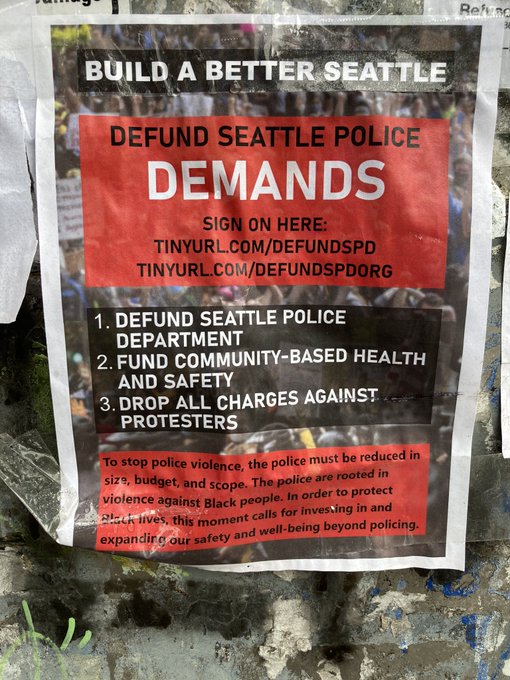 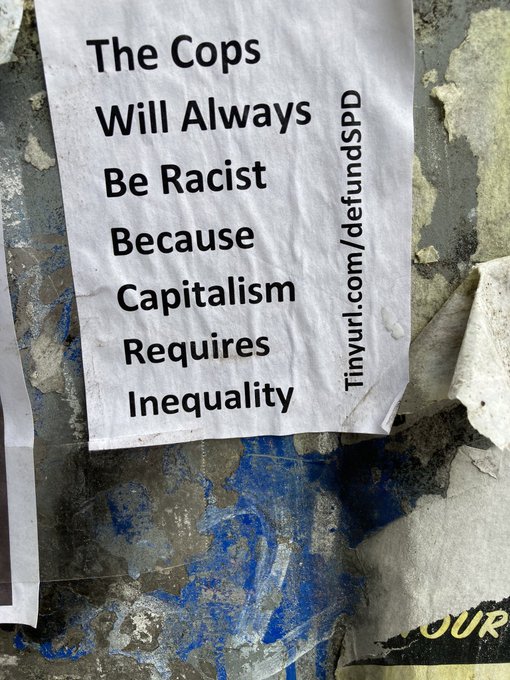 This Vandalism Gives the Lie to Antifa’s Anti-Fascist Claims

Ngo compared the situation to Portland in 2018 when Mayor Ted Wheeler allowed a similar antifa “zone” to exist inside that city for five weeks. “Not only did it become a biohazard site w/intravenous drug abuse, the local businesses & residents were terrorized. Tax payers had to pay for the extensive cleanup.”

Neither Mayor Durkan nor the Seattle Police Department have yet addressed the emergence of “Free Capitol Hill.”

“In an effort to proactively de-escalate interactions between protestors and law enforcement outside the East Precinct, Chief Best and [Seattle Police] officers have removed barricades surrounding the East Precinct while safely securing the facility,” Durkan reported last night. “In addition, [the Seattle Fire Department] has several vehicles stationed near the Precinct to ensure emerging medical needs and fires are addressed if necessary. Keeping this area safe is critical, as there are approximately 500 residential homes in this block.”

If keeping that area safe is “critical,” then Durkan has arguably experienced a “critical” failure.

Naturally, the mayor made tremendous concessions to the rioters even while claiming she would keep the area safe.

“As the Chief takes this operational step, we will continue to remain focused on what we can and must do to address the systemic inequities that continue to disproportionately impact our Black residents,” she tweeted. “Yesterday, we announced a commitment to invest $100 million dollars into community – in addition to existing city programs — and to work with community to create a Black Commission that will help to amplify black voices in City Hall.”

She concluded her Twitter thread by expressing hope that “tonight, with these operational changes, our city can peacefully move forward together.”

Yet it appears the city cannot move forward together — the rioters are declaring independence from the city itself. No concessions will be enough for these instigators, who consider the police an occupying “regime” force and demand the end of the very capitalistic system that enables them to enjoy goods and services like a coffee bar. (As Bernie Sanders might say, “Why do you need more than one type of coffee?”)

Antifa is now running an insurrectionary state inside Seattle itself. This revolt is cause for State Police and arguably the National Guard to restore order to an American city. President George H.W. Bush used the Insurrection Act to quell the 1992 Los Angeles riots, and this antifa “free state” is arguably cause for Trump to do the same here and now. But don’t you dare say that within earshot of The New York Times.

MEMO to those who see the forest from the trees, as is said: Speak up, forthwith! No time to lose. No time to play possum and pretend that what is isn’t. So, raise your voices and your presence on the streets, after all, you may not get another chance, that is, if the likes of ANTIFA/BLM — now in control over major American cities — gain “official” status within the White House through the puppeteers of a Biden Presidency, heaven forfend, in November 2020!!

The below video contains more evidentiary trails, as per ANTIFA and its agenda!