As part of my contractual obligations with a privately-held Homeland Security entity, a quarterly Intel analysis – with footnotes and exhibits – is a central component. Moreover, as many have come to realize, the entity underwrites a bi-annual Intel Conference in Tel Aviv – of which I am the ‘resident’ expert on the Muslim Brotherhood Mafia. As an American-Israeli living in Israel (with highly reliable sources and resources in both countries), my expertise is particularly valuable. In other words, I am ‘up close and personal’ with this and that Jihadi hydra through various channels. Let’s leave it at that.

Intrinsically, it is through much heavy-lifting that many are becoming increasingly aware that what ‘goes down’ in Israel, that is, Jihadi-wise, has direct knock-on effects on America. Vice versa. (Europe alike.) This terror nexus is touched upon throughout a growing compendium of work, however, for this discussion, the previous quarterly analysis is ‘ground zero’: ‘Trends/Adaptations In Jihadi Tactics, Intel Overview, 2018 To Date – The Rashida Tlaib Nexus.’

Resultant, how much greater can the impact upon U.S. national security be (think: 9/11/01) – other than through various causal (Jihadi) sequences, as they catapult between both nations with the backing of what should be termed a (Socialist-Democratic) Congressional ‘seal of approval’, no less? Bulls-eye.

Alas, as many have come to the realization that particular members of Congress are aligned with Islamism, the need for more, not less, information is a must. No ifs, ands, or buts. By extrapolation, political Islam, in direct opposition to western values, is where their loyalties lie. To wit, for the survival of the west, it is way too dangerous to pussyfoot around this incendiary topic.

Now, while Tlaib’s ‘Palestinian’ Jihadi roots were touched upon in the aforementioned (Jan. 2019) Intel overview, a particular excerpt bears repeating. In this way, additional ‘droppings’ will veer into sharp focus. Relief.

Effectively, I have been given permission to reveal this tidbit: when two of the assets associated with the conference (counter-terrorism and counter-Intel freelancers) were in Michigan (AKA Michiganstan) on another assignment, by accident, they ‘stumbled’ upon a bombshell. It revolves around a clear connection between particular ‘Palestinian-Americans’ (Jihadis-In-Suits) from clans in East Jerusalem, who happen to collaborate with clans in the Wadi Ara, who just happen to have access to Rashida Tlaib and her associates! This linkage is via what they coined the ‘Ramallah Connection’ ala the AFRP, The American Federation of Ramallah, Palestine. Oh, what a tangled web of terror. Btw, her parental and close extended family live in a small, but highly active, Islamic-laced village, Beit Ur al-Foqa. It lies smack in Israel’s Judean hills……

As such, it is along this twisted path of terror that, once again, an urgent spotlight has been shined (via the Homeland Security entity) on Tlaib. It is not for nothing.

Indisputably, it is due to her new-found power via the halls of Congress (alongside Omar & ‘AOC’) that her DEEP ties to Ramallah’s terror axis – you know, the very same city and seat of power which Arafat, the godfather of ‘Palestinian’ terror, reigned supreme – must be exposed. Excised. But, as always, a brief backgrounder is mandatory reading.

Yes, how many recall ‘Operation Defensive Shield‘ (March/April 2002), an IDF ‘root canal’ imperative at the Mukataa in Ramallah, the headquarters where Arafat and assorted terror kingpins holed up? Well, Tlaib’s family, rooted in Beit Ur al-Foqa (alongside a ‘sister’ village, Beit Ur al-Tahta), are supporters, in every sense of the word, of the ‘arc of terror’ which extends from within Ramallah and beyond; a super-charged arena which is a stone’s throw away (approx. 8 miles, no longer than 10 min. by car) from her devoted base!

Now, at this end, in order for operational assets to gather what they must, a balancing act, a tightrope, of sorts, is in play. Of course, terror targets realize that official and unofficial/freelance operatives are in their midst. That’s nothing new.

Even so, the following was brought to these ears for dissemination:

Unreservedly, it is forbidden to reveal (even to my partner, my ‘Doc’) any operational methods in which this or that Intel is collected. Still, suffice to state: human Intel (emphasis placed), combined with listening devices, can’t be beat!!

To wrap up today’s evidentiary trail, albeit miniaturized, let this update serve as a two-tier warning: as the second shot in the bow towards Tlaib’s menacing presence on Capitol Hill; in tandem with undeniable video/audio proofs, as seen below. Effectively, they tie in where her loyalties lie. Hint: not with America!

When Tlaib won her Congressional seat she did not wear an American flag, she wore the flag of a non-country called “palestine”. Interestingly enough, no politicians or media attacked her for “dual loyalty”, like they do all Jewish Americans. Food for thought……

Finally, Tlaib’s recent pronouncement, ‘The Holocaust is calming‘ (https://www.youtube.com/watch?v=rYKds2Ip6Dk) demonstrates the ease in which (purposeful) historical revisionism becomes ‘fact’, as well as how quickly PC captives jump to defend the indefensible.

Indeed, for an excellent analysis, listen up.

Until next quarter’s Intel update….. 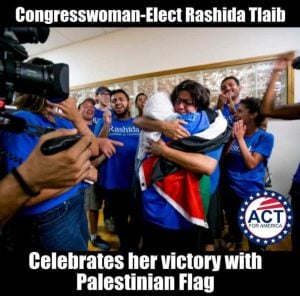