Islamic State Media ‏@ISIS_Med “Land of the Free… I’m dreaming of u every day…I’ll rename u Land of the Believer as I named Kobane Ayn al Islam”! Hmm….ISIS Media lays it all out….so why is DHS still in denial??

PATRIOTS, listen up….don’t dare be pulled into the leftist (Islamist-driven) claptrap that said Turkish terrorists, captured INSIDE Texas, are Kurdish fighters, therefore, have no fear! Yes, Kurds are, for the most part, allies to the west. And those of us in contact with some of their leadership (not to be confused with the Marxist terror contingent, the DHKP/C) understand that they wouldn’t risk their long championed strategic alliance with Washington to smuggle compatriots into the U.S.! In fact, said Kurds have legitimate channels for entry, and with powerful support behind them, rest assured.

ONE and all, the admin truly believes that Americans are dumb as posts, as evidenced by their wanton lies to the public re ObamaCare and so many other domestic and foreign policy concerns! In this regard, if their lips are moving they are lying. Simple as that.

(An MIT econ prof shills for a lying regime, after all, the “unwashed masses” will buy any shit shoveled their way! Similarly, why should any American trust them to expose grave homeland security dangers?)

BUT before we get to the meat of the disaster, let us recall all the previous (ISIS) lies proferred by DHS, yes, that same Islamist-captured homeland (in)security operation – that one!

HOW worrisome is it that Jeh Johnson, DHS’s head, has been downplaying to the American public the inherent threats stemming from terrorists infiltrating into America’s borders? Beyond the national pale.

AND it is this same DHS head who is totally non pulsed when military families are publicly threatened by jihadi terrorists! Does that sound like a leader the citizens can trust?

IN this regard, the latest infiltration has several layers, but let’s piece together its core components:

Four men flew from Istanbul through Paris to Mexico City in late August, where they were met by a Turkish-speaking man who stashed them in a safe house until their Sept. 3 attempt to cross into the U.S. over the border with Mexico.

Their capture by the Border Patrol in Texas set off a fierce debate over the men’s intentions, with some members of Congress saying they were terrorist fighters. Homeland Security officials, including Secretary Jeh Johnson, countered that they were part of the Kurdish resistance which, like the U.S., is fighting the Islamic State’s advance in Iraq.

But whether the men are linked to anti-U.S. jihadists or not, they admitted to being part of a U.S.-designated terrorist group, and their ability to get into the U.S. through the southern border — they paid $8,000 each to be smuggled into Texas — details the existence of a network capable of bringing terrorists across the border.

The four men’s story, as discerned from internal September and October documents reviewed by The Washington Times, also seems to contrast with what Mr. Johnson told Congress in September, when he assured lawmakers that the four men were not considered terrorist threats to the U.S., even as behind the scenes his department proposed the four be put on terrorist watch lists.

Homeland Security spokeswoman Marsha Catron said the individuals weren’t associated with the Islamic State, which is also known by the acronyms ISIL and ISIS.

“The suggestion that individuals who have ties to ISIL have been apprehended at the southwest border is categorically false, and not supported by any credible intelligence or the facts on the ground,” Ms. Catron said. “DHS continues to have no credible intelligence to suggest terrorist organizations are actively plotting to cross the southwest border.”

She did not reply to questions about the status of the four men or why her department proposed they be put on terrorist watch lists.

As of a month ago they were being held at the South Texas Detention Facility in Pearsall, Texas.

The men initially claimed to be members of the Revolutionary People’s Liberation Party/Front, known by the acronym DHKP/C. The group is a Marxist insurgency that claimed credit for a 2013 suicide bomb attack on the U.S. embassy in Ankara, Turkey’s capital, last year.

But U.S. counterterrorism officials said the men were more likely members of the PKK, or Kurdistan Workers’ Party, which has been battling for Kurdish rights within Turkey for decades, though recently PKK and Turkish leaders have tried to broker a political agreement.

Both the PKK and DHKP/C are listed by the State Department as terrorist groups.
Jessica Vaughan, policy studies director at the Center for Immigration Studies, said the fact that avowed members of terrorist groups got into the U.S. shows it’s possible to sneak across a porous border.

“This incident proves what enforcement experts have always known, and that is there are existing networks in Mexico and Central America that have been set up and cultivated by a variety of terrorist organizations to enable them to move people into the United States illegally,” Ms. Vaughan said.

It’s unclear what the men were trying to do. None of them admitted to being part of a plot against the U.S., and several told investigators they were hoping to seek asylum, saying they believed they were being targeted back home by police in Turkey.

Two of the men had tried to enter the U.S. before but had been denied visas when they couldn’t prove they intended to return to Turkey, the documents showed.

Jonathan Schanzer, vice president of research at the Foundation for Defense of Democracies, said he would be surprised if the men were part of a plot against the U.S……

MORE specifically, their Turkish origins are actually most germane. Time and again, Turkey has been front and center at this site and will continue to be in the future. What’s going on?

IN a nutshell, Turkey’s President Erdogan is a high level Brotherhood Mafia leader, and the ISIS is another terror branch from its jihadi tree. Yes, many of the hydras fight among themselves for hegemony, but ignore their internal rivalry and squabbling. In fact, as this is being written, Al Qaeda’s Nusra Front (also an offshoot of the MB) just signed a blood pact with ISIS and as long as it suits their purposes they will remain collaborators. But do ignore Obama Inc.’s reps (specifically, National Intelligence Director James Clapper’s bold-faced assessment) as they opine: no, this is not the case…as if it makes any diff at all, when both want to destroy America and the west! Not only that, Barack HUSSEIN Obama’s hand-picked yes-men always downplay the goals of the Muslim Brotherhood Mafia, even though their own documents reveal their plans “that their work in America is a kind of grand Jihad in eliminating and destroying the Western civilization from within and ‘sabotaging’ its miserable house by their hands … so that … God’s religion [Islam] is made victorious over all other religions.”

Clapper misled Congress, yet the connections between terrorist organizations and groups like CAIR, ISNA, IUMS, and many others are well documented. In addition, the many terror groups are connected as well and the infiltration in the US is ongoing. Our Government living in denial, why?

The next worry is that all of these entities have infiltrated the United States and our allies, and to doubt this is simply in contravention of documented truth. The problem is rampant across the US and he is one recent example:

Here is an excerpt from the NY Post on an article entitled from this week, “‘Carloads’ of terrorists turned Oregon ranch into training camp”:

An Oregon woman says she thought she was opening up her family’s ranch to local Muslims to teach them how to grow and can veggies — and that her husband was even expecting a tax write-off.

But US-born Muslim convert Eva Hatley testified in Manhattan federal court Tuesday that after the “carloads’’ of fellow Muslims she met through her mosque arrived at the 160-acre ranch in Bly in 1999, the couple watched helplessly as their home was turned into an al Qaeda training camp.

“It wasn’t anything like I envisioned for the property,” insisted Hatley, testifying at the trial of one-eyed, hook-handed hate preacher Abu Hamza al-Masri.

Hatley, a two-time witness-protection-program flunky who prefers going by her Muslim name, Ayat Hakimah, said other Muslims from London would soon arrive on al-Masri’s orders. (Read the rest of the article here.)

It is also documented in many other reports, some of which we have posted at Stand Up America. This is NOT a new phenomena; many diligent people have documented these connections and training camps for years. To show the connections between terror groups, the Investigative Project is legend in its efforts. Here they show some for the connections:

A top Hamas leader and the Palestinian ambassador to Tunisia have thanked Rachid Ghannouchi, the leader of Tunisia’s Muslim Brotherhood-linked party, Ennadha, for his role in brokering last week’s reconciliation deal between Fatah and the terrorist group.

Ghannouchi has been the most prominent Islamist leader in Tunisia for over 30 years and was banned from entering the U.S. during the 1990s because of his support for Palestinian terrorism.

The Obama administration lifted the ban in 2011 following the Arab Spring even though he never renounced his support for terrorism. He met with top State Department officials in Washington last year and during his most recent visit in February.

Ghannouchi serves on the board of trustees for the International Union of Muslim Scholars (IUMS), headed by radical sheik Yusuf Qaradawi, which has repeatedly called for Israel’s destruction. The IUMS also counts Hamas Prime Minister Ismail Haniyeh as a member. (Read more here at the Investigative Project.)

What puzzled us when it happened may be clear now, Holder appears to be protecting these very groups that Clapper denied being in contact with as is explained below. But just recently, the whole issue of why Holder would not release the documents on the ‘Holy Land Foundation Trial’ to Congress came up again….

THAT being said, take a peek at the following jihadi’s twitter heads up, and from ISIS’s OWN media feed to their Turkish brothers!

Islamic State salutes Turkish brothers from @genclikbirligi for their attack on kafir Americans in Wilayat Istanbul!!

YES, this is just a snippet but there are so many others.

NOW, if your patriotic heart and mind can withstand it, ISIS Turks in Texas are not the only infiltrating danger.

ONCE again, ISIS’s Media feed is brazen enough to give a shout out to their jihadi brothers-in-arms: Colorado, here they come…accommodations and all!! 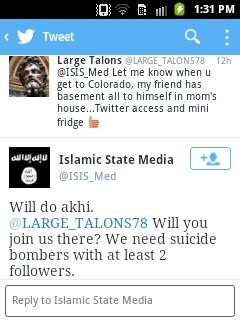 THE question becomes: why is DHS still clinging to their lies:
Homeland Security spokeswoman Marsha Catron said the individuals weren’t associated with the Islamic State, which is also known by the acronyms ISIL and ISIS.
“The suggestion that individuals who have ties to ISIL have been apprehended at the southwest border is categorically false, and not supported by any credible intelligence or the facts on the ground,” Ms. Catron said. “DHS continues to have no credible intelligence to suggest terrorist organizations are actively plotting to cross the southwest border.”
BUT Americans are hardly the only ones in their barbaric cross hairs, even as Muslim mothers (and fathers) shout to the heavens, opining: how did this happen??

“I didn’t raise my son like that,” says French Muslim woman who is shocked, just shocked. to learn that her terrorist son is a bomb maker.