WHILE the U.S. Congress is now firmly in the hands of Republicans – and this is certainly something to celebrate –

the fact of the matter is that too many RINOS are equally embedded. In other words, par for their “accommodating” course, they will hardly vote Conservative, especially on key issues. Forewarned.

THAT being the case, we must also recognize that the Islamist-in-Chief has admitted to the following (albeit through his mouthpieces), thus, he must be taken at his word:

Deputy National Security Adviser and MFA in creative writing Ben Rhodes likened an Iranian nuclear deal to Obamacare in a talk to progressive activists last January, according to audio obtained by the Washington Free Beacon.

The remarks, made at a since-discontinued regular meeting of White House personnel and representatives of liberal interest groups, reveal the importance of a rapprochement with Iran to President Obama, who is looking to establish his legacy as his presidency enters its lame-duck phase.

MIND you, the Executive Branch must have Senate approval, as “equal partners”, to execute a “deal” with the genocidal mullahs. We know that. However, this is a Renegade-in-Chief who has bypassed Congress on key major policies, regardless of the accrued illegality. A Rogue-in-Chief.

Sounding more like a third-world dictator than a U.S. president who took an oath to uphold the Constitution, Obama announced that he would no longer wait for Congress or legislation to impose his radical agenda to “fundamentally transform” America. Instead, in January 14 remarks about making 2014 a “year of action,” Obama declared that his administration would expand its rule-by-decree machinations through the use of even more anti-constitutional “executive orders” and “executive actions.” The radical plan, analysts say, is setting up a potential showdown of historic proportions with lawmakers and an increasingly outraged American public.

Of course, over the last five years, the Obama administration has usurped unprecedented amounts of legislative power through the use of more than 150 unconstitutional executive decrees — far worse than the very real abuses perpetrated by his predecessors. On everything from gun control and “education” to “global warming” and energy — all areas that are constitutionally off-limits to Washington, D.C., even with legislation — the executive branch has stepped way outside the bounds of legitimate constitutional governance and into the realm of lawless tyranny. Last year alone, the Obama administration imposed more than 80,000 pages of new regulations on America. He also started a war without even informing Congress.

Instead of undoing the damage, however, Congress has allowed it all to happen. Despite some occasional rhetoric, lawmakers have even been providing taxpayer funding for the administration to implement its extreme and unlawful schemes. With a never-ending parade of major scandals, the public, of course, has had just about enough of the lawlessness, with more than two-thirds of Americans saying that the federal government is now “out of control” and threatening basic liberties. Surveys have even shown that a majority of voters support impeachment….

BUT to truly understand the unfolding nightmare(s), one must internalize two central and compelling factors: as stated, Barack HUSSEIN Obama views a “deal” with Iran as a central component to his second-term foreign policy, his legacy. Concomitantly, he will stop at NOTHING to get it done. Never forget this. You can hold this site accountable for its assessment.

IN tandem, losing face, via the most stinging rebuke to a second-term POTUS in decades, is a death-blow to his narcissistic personality. He is beyond inflamed. In essence, little is more dangerous, when compared to a narcissist’s rage, than a wounded ego, especially when feeling like a caged tiger. Yes, ego-driven to the max, narcissists will NEVER back down from their plans, and even more so when their power is threatened. Indeed, being foisted into the minority – no less, with a stinging rebuke from the “unwashed masses” – causes said dangerously afflicted personality to lash out in uncontrollable fury.

Narcissistic rage occurs on a continuum from instances of aloofness, and expression of mild irritation or annoyance, to serious outbursts, including violent attacks.[2

EVER more urgent, this site has accrued much evidence to point the readers where Barack HUSSEIN Obama is heading in regard to Iran, the west’s GLOBAL horror show. The following is just a small recap, amassed from many citations within this site:

YES, the Islamist-in-Chief has been shielding Iran, Islam, and this is no longer up for debate. 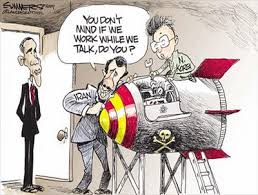 AND the fruits of his Islamist (Sunni and Shia) labors were accelerated during Israel’s fiery war, this past summer, with Hamas, ensuring that Hamas remained standing too. Regardless, said truth does not vitiate PM Netanyahu’s cowardly dereliction of duty, as it was his duty to ignore BO’s diktats! His onus.

Lost amid the understandable focus on the fighting in Gaza was a major Middle East news story. On July 18, the U.S. and its Western allies agreed to extend the Iran nuclear talks for four months. But rather than the fighting between Hamas and Israel allowing the negotiations to continue under the radar, the events unfolding in Gaza ought to make it harder rather than easier for the Obama administration to evade its obligation to deal with this threat.

The leaders of the Senate Foreign Relations Committee groused in public yesterday about the way the Iran talks are proceeding with little public accountability. Both Democratic Chair Senator Robert Menendez and ranking Republican Bob Corker expressed dismay about the way the supposedly finite period for negotiations with Iran had effortlessly transitioned into injury time with every possibility that the four-month period could be extended again in November. There was no appetite on the committee for a rerun of the bruising and losing fight Menendez waged against the administration on behalf of tougher sanctions on Iran in order to strengthen the West’s hand in the talks. Yet the frustration about the P5+1 process is clear…..

MOST significantly, we must get to the heart of the Shia axis within his anti-American regime; Valerie Jarrett. A clear and present danger.

Warning: Western Center For Journalism – This video contains images that may be disturbing to some viewers.

According to Barack Obama himself, no presidential decision is made without her, creating what amounts to a co-presidency shared between Obama and Valerie Jarrett. According to insiders, she is often seen walking the halls of the White House late into the night, being dubbed “The Night Stalker” by Obama’s Secret Service detail.

But this “Night Stalker” moniker may mean more than sneaking into Obama’s chambers to secretly discuss what the “co-presidency” is planning. The “Night Stalker” may be planning the destruction of a country she abhors: the United States.

Watch this groundbreaking video to learn of the claim that Jarrett was behind the botched plan to kidnap ambassador Chris Stevens on September 11, 2012, as part of a plan to eventually destroy the United States!

IN reality, as night follows day, Valerie Jarrett is the main deal maker with Iran’s genocidal mullahs via her mobbed up familial connections to their top leadership! Say it ain’t so…

But if not for a highly trusted contact in mid 2012, at the inception of this site, the reportage on Val would have been minimal, if at all. A heads up from an “in the know” Washington, DC associate who kept dropping hints….again and again. It is important to give credit where it is due. No one is an island.

That being said, a starting point was documented, one which included Valerie Jarrett’s crimes against America and Israel in particular and the west in general.

Exhibit E: Valerie Jarrett Reigns Supreme, Even Regarding The “Kill” – Or Not – Of Osama Bin Laden…..

IN light of all the above, plus so much more, does anyone in their sane mind want to give the mullahs the path, the freedom, to detonate a nuclear mushroom cloud over Israel, as well as the ability to do so inside America and beyond? And until they decide to actively EXPLODE their nukes they will – for a certainty – use their WMD status to blackmail the west into suicidal policies!

INDEED, a dangling nuclear sword. What could go wrong? Be worse?

AS a foretaste, just consider their decades of murderous jihad across the globe – mainly via Hezbollah, their proxy arm and Iran’s revolutionary Al Quds force – and this was without a WMD protective umbrella!

MORE specifically, one might query: hasn’t Barack HUSSEIN Obama thought of the above dangers? Rhetorical.

OMINOUSLY, it is precisely due to Iran’s aims to destroy the west (with or without their Sunni Brotherhood partners) that the Jihadi-in-Chief is strengthening them. The point being, Jarrett, as his point woman, his hatchet, is key!