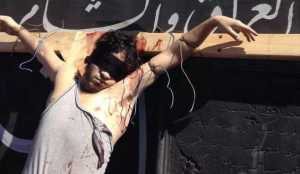 EVEN as many Muslims in the Mid East look on in shock at the carnage unleashed via “Pure Islam” – caught in the crossfire themselves – the fact of the matter is many more stay silent and a preponderance of others actually agree with said barbarism. What’s going on?

IN reality, there is no stopping the carnage unless Islam is stopped. Plain and simple. And while it sounds like an impossible task, it may very well extinguish itself, if only in generations to come. Nonetheless, millions more will be sacrificed on its bloody altar, as in the past. Where is this assessment coming from, especially since this blogger is not one who dabbles in fantastical thinking, believing that this scourge on earth may finally die out, though hardly within our lifetime?

BEFORE the above is addressed, the reader must internalize the underpinnings of Islam to also understand its bloody basis; its roots. It is not enough to just look on, in horror, and throw up ones hands. Towards this end, a groundbreaking policy paper was written and this blogger was asked to participate in its review. It was showcased only 2 weeks after the inception of this site, July 13, 2012. “Islam & Blood” has been featured here on several occasions, and another repeat performance is efficacious.

While the above is intrinsic to the conversation and to the reader’s knowledge base, the following link is GROUNDBREAKING .Yes, the caps are there for a reason. They are placed for much needed emphasis. In brief, it is a recent policy paper by Professor Eidelberg; a paper which this American-Israeli had the privilege to review and add her thoughts to; duly honored and humbled to have been asked to participate in his myth shattering scholarship.

Make NO mistake – its contents are earth shaking; unbelievably thought provoking; cogently analyzed; and in particular, its historical analysis and theological basis are spot on. Having read – and participated in – many policy papers this praise is not offered lightly. Therefore, sit down… put your feet up… have a drink (not the inebriating kind)…. enjoy some sweets (you may need it to lighten the mood)… and start reading – https://adinakutnicki.files.wordpress.com/2012/07/islam_and_blood.pdf . Sharing its contents may well be your most important contribution to our common struggle….

AND now that Islam’s blood pact is thoroughly understood, as depressing as it is, please keep your eyes peeled. Don’t veer away.  Besides, as is said, the truth shall set you free. Say what? Well, once reality sets in, the fact of the matter is that the blinders come off too. As such, the more truths one can amass, westerners are equipped to not only spread them, but to hammer their leaders to reveal them! A win-win. View the above as your clarion call. Your mission statement.

IN tandem, absorb the following as extra (mental) ammunition…

Given that Allah hates non-Muslims to the extent that he would prevent them from knowing the truth, cause them to err and then condemn them to eternal torture for their unbelief and misdeeds, it would make little sense if he intended Muslims to treat unbelievers by the same standards that they treat each other here on earth.

The Quran says that no true Muslim would ever love anyone who resists Islam, even if it is a family member:

Thou wilt not find any people who believe in Allah and the Last Day, loving those who resist Allah and His Messenger, even though they were their fathers or their sons, or their brothers, or their kindred. (58:22)

There are at least nine places in the Quran where believers are warned not to befriend non-Muslims:

O ye who believe! Take not for friends unbelievers rather than believers: Do ye wish to offer Allah an open proof against yourselves? (4:144)

In fact, anyone who does take a non-Muslim as a friend could be accused of being an unbeliever as well:

O ye who believe! Take not the Jews and the Christians for friends. They are friends one to another. He among you who taketh them for friends is (one) of them. Lo! Allah guideth not wrongdoing folk. (5:51)

Note that Christians, according to the Quran, are included in the ranks of “unbelievers”:

They indeed have disbelieved who say: Lo! Allah is the Messiah, son of Mary (5:17)

Muhammad said that unbelievers have it out for Muslims.  They may appear harmless or friendly, but, in reality, they harbor corruption and evil intentions:

O ye who believe! Take not into your intimacy those outside your ranks: They will not fail to corrupt you. They only desire your ruin: Rank hatred has already appeared from their mouths: What their hearts conceal is far worse (3:118)

For the Unbelievers are unto you open enemies (4:101)

Those outside of Islam are really helpers of evil against Allah:

The Quran says that “hostility and hate” will exist between Muslims and infidels “for ever” until the latter “believe in Allah alone.” (60:4)

Instead of befriending non-Muslims, the Quran encourages hostility.  Muslims are ordered to fight unbelievers:

O ye who believe! Fight those of the disbelievers who are near to you, and let them find harshness in you, and know that Allah is with those who keep their duty.(9:123)

The Quran tells Muslims that they will spend eternity laughing at unbelievers (83:34) and mocking their suffering as they are tortured in Hell:

And the dwellers of the garden will call out to the inmates of the fire: Surely we have found what our Lord promised us to be true; have you too found what your Lord promised to be true? They will say: Yes. Then a crier will cry out among them that the curse of Allah is on the unjust. (7:44) – Muhammad got an early start on this by personally mocking his dead enemies following the Battle of Badr (Ibn Ishaq 454)

One does not befriend those over whose suffering they will later rejoice, nor does it make any sense that Muslims would befriend those whom the Quran labels “enemies of Allah” by virtue of their unbelief.

NOW that that is settled, our western fight must be viewed as one to eliminate Shariah law, the poisonous root of all the carnage. Its mandates. So it is certainly not a shock that ISIS/ISIL, Boko Haram (or whatever hydra thereof) mandates the purging of Christians, Jews and all apostates. It is evidenced within:

HOW many more times does it need to be reiterated: Islamic cannibalism is rooted in its relationship to blood!

MOREOVER, what is beyond dispute is the purging of Christians (Jews too) from anywhere that Islam claims as part of their turf, so to speak: Dar al-Islam (Arabic: دار الإسلام‎ literally house/abode of Islam; or Dar as-Salam, house/abode of Peace; or Dar al-Tawhid, house/abode of monotheism) is a term used by Muslim scholars to refer to those countries where Muslims can practice their religion freely. It’s the area of the world under the rule of Islam, literally, “the home of Islam” or “the home of submission.” [1] These are usually Islamic cultures wherein Muslims represent the majority of the population, and so the government promises them protection. Most Dar al-Islam areas are surrounded by other Islamic societies to ensure public protection.

HOW many more have to be sacrificed on the altar of Islamic barbarism, as its adherents keep slaying and slaughtering in the name of Islam, yet many Churches (synagogues too) remain stone cold silent?

Think of it this way: what will it take to get American (western) leaders, even counter-terrorism experts, to finally scream the truth? Realistically, likely a mega terror attack, one which will be impossible to pretend that what is isn’t. That’s the truth.

Islamist insurgents have issued an ultimatum to northern Iraq’s dwindling Christian population to either convert to Islam, pay a religious levy or face death, according to a statement distributed in the militant-controlled city of Mosul.

The statement issued by the Islamic State, the al Qaeda offshoot which led last month’s lightning assault to capture swathes of north Iraq, and seen by Reuters, said the ruling would come into effect on Saturday.

It said Christians who wanted to remain in the “caliphate” that the Islamic State declared this month in parts of Iraq and Syria must agree to abide by terms of a “dhimma” contract – a historic practice under which non-Muslims were protected in Muslim lands in return for a special levy known as “jizya”.

“We offer them three choices: Islam; the dhimma contract – involving payment of jizya; if they refuse this they will have nothing but the sword,” the announcement said.

A resident of Mosul said the statement, issued in the name of the Islamic State in Iraq’s northern province of Nineveh, had been distributed on Thursday and read out in mosques.

It said Islamic State leader Abu Bakr al-Baghdadi, which the group has now named Caliph Ibrahim, had set a Saturday deadline for Christians who did not want to stay and live under those terms to “leave the borders of the Islamic Caliphate”.

“After this date, there is nothing between us and them but the sword,” it said.

The Nineveh decree echoes one that the Islamic State in Iraq and the Levant, the former name for the Islamic State, issued in the Syrian city of Raqqa in February, demanding that Christians pay the jizya levy in gold and curb displays of their faith in return for protection.

The concept of dhimma, governing non-Muslims living under Islamic rule, dates back to the early Islamic era in the seventh century, but was largely abolished during the Ottoman reforms of the mid-19th century.

Mosul, once home to diverse faiths, had a Christian population of around 100,000 a decade ago, but waves of attacks on Christians since the 2003 U.S.-led invasion to topple Saddam Hussein have seen those numbers collapse.

The resident of Mosul who saw the Islamic State announcement estimated the city’s Christian population before last month’s militant takeover at around 5,000. The vast bulk of those have since fled, leaving perhaps only 200 in the city, he said.

IN a similar fashion, yet sans as much “fanfare” as in Iraq, Syria etc., traditionally Christian enclaves in Israel (in Judea and Samaria, aka the “West Bank”), in particular, Bethlehem, now under control of Islamists via the accursed Oslo Peace/Death Accords, has seen a complete dwindling of its population. Many have been murdered, while others have managed to flee for their lives. The rest are living in a petrified state of limbo, mostly via dhimmi status and the like. However, this bit of “news” is kept mostly on the QT, lest it tarnishes the PA/Fatah “halo”.

ON the other hand, all territory under Israeli control has seen an increase in the Christian population and all that it entails. Regardless, no one in their right mind cannot see that Islam is a cancer which must be excised.