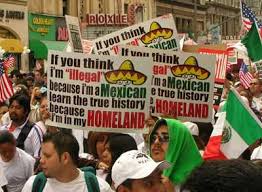 As is said, there is more than one way to skin a cat. And this skinning constitutes the total deconstruction (the “transformation”) of America via one path or another. NOTHING less will suffice.

Now, as repeatedly stated, the “koshering” of illegals is part of the plan to subvert the Constitutional underpinnings of the nation, enabling a “natural” process of chaos to ensue. The clues to this incendiary charge are manifest.

At the onset of this blog (Aug. 2012) the following video clip was offered up. It was an attempt to alert readers to the dangerous developments under Obama Inc.’s rule, and to do so in advance of the 2012 elections:The Fruits Of Washington’s Dictator-in-Chief: Short Video Clip! A fruitless task…a useless mission…whistling past the graveyard…

Nevertheless, a clueless electorate voted in the Traitor-in-Chief for a second term and now the rest of America – and the west – are reaping a whirlwind of disasters, its bitter fruits, even though his illegal bent was on display (during his first term) for all to witness:What Are The Chances Of Reining In A Lawbreaker-in-Chief Who Abets Illegal Aliens, Then Punishes Those Who Expose Said Lawbreaking?

Back in the day, you know, during the Fraudster-in-Chief’s first term, his DHS head honcho couldn’t even find the criminals under her purview:“Mama Janet’s” DHS LOSES ! 226 Illegals, Deemed National Security Threats Too. How Did This Happen? Did you ever? Can you believe it? Do!

In this regard, what other conclusions can one come to when:DHS, AN OUTLAW, RENEGADE AGENCY IS CAUGHT FERRYING ILLEGALS & USURPING LAW & ORDER. A MIRROR OF AG HOLDER’S LAWLESSNESS!

The Obama administration is threatening public safety by deliberately hampering immigration law and releasing aliens with criminal records, according to a new review of internal Immigration and Customs Enforcement data.

A Center for Immigration Studies report to be released Monday and obtained in advance by The Daily Caller, found that last year ICE reported nearly 722,000 encounters with illegal or criminal immigrants. But ICE officers filed immigration charges against less than 195,000 aliens.

“According to ICE personnel, the vast gap between the number of encounters reported and the number of aliens put on the path to removal exists because officers are not permitted to file charges against aliens who do not fall into the administration’s narrowly defined criteria for enforcement, regardless of the criminal charges or the circumstances in which the alien was identified,” the report, authored by CIS director of policy studies Jessica Vaughan, reads.

Since June 2011, when the first of the Obama administration’s “prosecutorial discretion” policies were put in place, the report adds, interior ICE arrests have declined by 40 percent.

“The Obama administration and anti-enforcement activist groups have tried to portray the number of departures as ‘record-breaking’ and indicative of robust immigration enforcement. They have tried to support this claim by showing that the number of departures credited to ICE is higher than ever before,” the report reads. “However, an independent analysis of ICE records obtained in a lawsuit showed that ICE was able to achieve these ‘record’ departures only because the agency was taking credit for removing a large number of individuals who were apprehended by the Border Patrol. Such cases made up the majority of ICE’s reported deportations in 2013, but they had never been counted that way in previous administrations.”

Indeed, as the review highlights, many aliens with criminal convictions have simply been released.

In 2013 some 68,000 criminal aliens were released — or 35 percent of all criminal aliens ICE reported encountering, according to the report. ICE field offices with the highest rates of criminal releases were San Antonio (79 percent), New York City (71 percent), Washington, D.C. area (64 percent), and Newark, N.J. (60 percent).

“These figures suggest that despite claims of a focus on public safety, the administration’s prosecutorial discretion criteria are allowing factors such as family relationships, political considerations, or attention from advocacy groups to trump criminal convictions as a factor leading to deportation,” the report reads.

The data is sure to further frustrate critics of the Obama administration’s immigration policies that much more, including Alabama Republican Sen. Jeff Sessions who says the “[Department of Homeland Security] is a department in crisis” and is calling on DHS Sec. Jeh Johnson to “reject the President’s demands to weaken enforcement further and tell him that his duty, and his officers’ duty, is to enforce the law – not break it.”

“As Homeland Secretary, Mr. Johnson is tasked with ensuring the public safety and the rule of law. But Secretary Johnson is not meeting these duties,” Sessions said in a statement to TheDC. “American citizens have a legal and moral right to the protections our immigration laws afford — at the border, the interior and the workplace.  The administration has stripped these protections and adopted a government policy that encourages new arrivals to enter illegally or overstay visas by advertising immunity from future enforcement.”

“Comments from top Administration officials, such as Attorney General Holder’s claim that amnesty is a civil right, or Vice President Biden’s claim that those here illegally are all U.S. citizens (apparently including someone whose visa expired yesterday), demonstrate the administration’s increasing belief in an open borders policy the American public has always rejected,” he added.

According to Vaughan, Congress should initiate an official look into the impact of the administration’s prosecutorial discretion policies.

“The Obama administration’s deliberate obstruction of immigration enforcement, in which tens of thousands of criminal aliens are released instead of removed, is threatening the well-being of American communities,” she said.

To Sessions, however, it is Republicans who must work to hold the administration accountable for its rejection of the law.

“The Administration’s lawless policies have not only impaired public safety but increased economic suffering for millions of vulnerable Americans by depriving them of their jobs and wages,” he said. “Unfortunately, Congressional Democrats continue to empower this lawlessness. Republicans must work to end it.”

Other key findings in the review include:

ASIDE from everything else – ideological divides beside the point – the fact of the matter is that the ruling clique in Washington are little more than “legal” lawbreakers.

In other words, under the deep cover of the highest law enforcement office of the land – the AG’s office – lies a plethora of lawyers who regularly, and with impunity, make a mockery of the rule of law! Eric Holder and Barack HUSSEIN Obama back up all the lawbreaking activity. Hell, they encourage it.

As such, letting loose criminal illegals, to prey on unsuspecting Americans, is seen as part of their job description, as well as a path to their promotions. No joke.

This blog stands by the aforementioned charges. 100%. And lo and behold: Illegals are now kosher!

16 thoughts on “DISMANTLING AMERICA VIA ILLEGAL IMMIGRANTS:RELEASING CRIMINALS INTO PUBLIC SPHERE.BRINGING DOWN “AMERIKA”…Commentary By Adina Kutnicki”