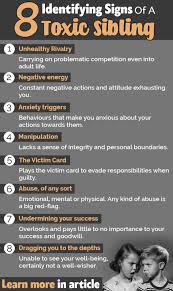 EVERY so often, a subject comes up that warrants further exploration.

AS such, if the hairs on the back of your neck stand up, and before it is too late (most especially, with an adult sibling), pay proper attention. No shame in doing so. After all, it can’t hurt, and it may even help the relationship. Basically, this is so because the closest family members are those who have been there from the get-go and should have each other’s backs. At the very least, if harboring simmering resentment, they should keep their distance.

MORE specifically, sibling relationships formed during childhood often set the stage far into the future. For good and not so good. But when the relationship goes awry, toxicity often takes its place. This can occur publicly or in the recesses of the family unit.

AT this end, much food for thought often occurs at Shabbat dinners — no pun intended. This is due to the depth and breath of topics discussed by the most interesting and well-informed guests.

MOST recently, a senior trauma surgeon (in the leading trauma hospital in Israel) relayed disturbing information about a little known topic, that is, sibling violence leading to increased admissions to the trauma unit! That week, a middle-aged male presented with injuries inflicted by his brother. It led to intubation due to traumatic brain injury, commonly referred to as TBI. Holy smokes.

WITH a mouth agape (and still full of food…not a pretty sight!), this investigative journalist peppered him with question after question. Primarily, what are the stats? And, overall, which age grouping is most prominent?

WITHOUT hesitation, he provided both — of course, sans any personal data — and it became even more shocking. Mind you, expecting the victims to be mostly testosterone-fueled males was an erroneous assumption.

APPARENTLY, sisters have been known to beat the crap out of sisters, even pummeling blind-sided brothers! Yes, unbridled rage can afflict both sexes. But it was senior-aged victims/perpetrators that shocked the most. How can this be?

THIS senior surgeon elaborated: tragically, since the above is not an anomaly, top psychological/psychiatric researchers were given the task to examine the stats; with a main emphasis on family dynamics. Most of the victims and their immediate family members cooperated with the study, while some refused to respond. In the near future, their peer-reviewed results will be published at reputable journals.

MOST significantly, two results became abundantly clear: firstly, unresolved sibling jealously from childhood can explode at any time, that is, even decades later! Secondly, for the most part, the blind-sided aspect is hidden beneath passive-aggressive behavior — overwhelmingly, a trait found in female aggressors!

ALAS, once the dinner guests digested the above, all eyes turned towards this writer — and not just because of being a gracious co-host, hopefully.

APPARENTLY, some are familiar with the investigative work within. As such, one guest wanted further clarification on a certain investigation she found very disturbing at this site. And due to the in-depth discussion at hand, she posited that a tie-in may exist to said investigation. Incontestably, what a sharp lady to connect these dots!

IN a nutshell: a trusted American-Israeli contact — a highly connected criminal investigator, having worked for a Florida-based Prosecutor’s office for years, as well as being a licensed investigator in Israel — asked for assistance with an on-going investigation (and ensuing trials) of a murderous clan: the Adelson family from south Florida!

WHEREAS the below investigative report sets the stage, the aforementioned tie-in attests to what can transpire when family dynamics — with siblings in the deadly mix — are poisonous in the extreme.

INDEED, while siblings can turn on each other with rage-filled fury, it is also the case that unnatural enmeshment within nuclear families can lead some to commit the most heinous crimes imaginable, of course, on behalf of the family “good!”

ALL in all, it should be crystal clear by now: when family relationships become infected with this or that toxicity, all manner of crimes are on the table. Be it a family from the upper echelons, professionally and financially, akin to the Adelson clan, or one that is barely scraping by, it matters not a whit.

KNOW this: siblings that fail to resolve inner demons from childhood, in one way or another, may resolve to rectify things with so-called self-righteous fury — the likes of which can have untold consequences.