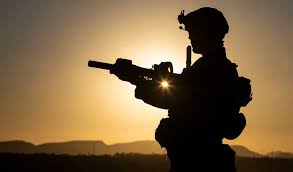 IT is hardly accidental nor incidental that the father of US progressivism, Woodrow Wilson (may he spin in his grave), signed the Federal Reserve Act in December 1913. Located in the D.C. cesspool, it is run by seven members, or “governors, ” who are nominated by the POTUS and confirmed by the Senate. It is from this crooked body that money is printed out of thin air — and so much worse.

IN this regard, the following back-story was reported, 1/22/2021. It outlines “The Corporation” and how we got from there to here. Hang on. Tight.

AS such, the facts contained within go hand-in-fist with the below reported gunfight.

MAY their sacrifices NOT be in vain!

While most Americans sat glued to televisions and electronic devices on the evening of November 8, a blistering firefight between U.S. Marines devoted to restoring order to the Republic and federal agents loyal to the criminal Biden regime took place at the Federal Reserve headquarters in Washington D.C., with the Marines suffering a crushing defeat, Real Raw News can now report.

Although RRN takes no pleasure in highlighting White Hat losses, we have an obligation to report them, just as we do their triumphs.

On the morning of November 8, General David H. Berger greenlit an operation to seize control of the Federal Reserve after learning that the criminal Biden regime was in the process of buttressing the building’s security with a 10’ tall perimeter wall to prevent the outside world from discovering that the criminals within were minting billions and billions of dollars—fiat currency unbacked by gold—meant to reach the hands of Ukrainian President Volodymyr Zelenskyy.

Sources in Gen. Berger’s office told RRN that the general spoke to both President Trump and Trump’s advisors before committing to the raid. The consensus, he added, was that the Fed would be dark and mostly empty due to it being Election Day, with only a small contingent of treasury agents guarding the 6-story, steel beam structure.

General Berger, sources added, handpicked two Marine Scout-Sniper platoons comprised of 24 men to fulfill the mission, the objectives of which included surveilling the building, eliminating or subduing opposition, and destroying the engraving & printing machines. The Marines arrived at the Fed at about 1:00 am an exploited a gap in the wall that was still under construction. While snipers provided overwatch, the other Marines stealthily approached the front doors—then all hell broke loose.

The doors flung open, and treasury agents equipped with NVGs and armed with automatic rifles unleashed a phalanx of bullets at the Marines, striking and killing four Marines as they tried to rush the doors. The Marine snipers returned fire and downed three treasury agents, while the Marines in the courtyard dove for cover and fired into the doorway with their own M27 rifles. Three more Marines were struck down as they moved to flank the doors, and then IRS snipers appeared in the windows of the upper level, taking potshots in the general direction of the Marine sniper squads. One IRS sniper took a headshot and was felled, but the Marines quickly realized they were outmanned and outgunned as floodlamps illuminated the exterior and a voice echoed, “You’ve walked into a trap and are covered from an elevated position. Drop your weapons and surrender. We have you outnumbered 20 to 1.”

The Marines began a tactical retreat, laying down suppressive fire as they withdrew two-by-two through the gap in the wall from whence they came. The Marine snipers plunked at the windows and doorway while the men on the ground evaded a hailstorm of gunfire. Another Marine was wounded during the egress, and the remaining Marines escaped unharmed.

“This was a loss,” a source in Gen. Berger’s office later told Real Raw News. “They obviously knew we were coming; we don’t know how. That place is printing money hand over fist and sending it overseas. We meant to stop it. Matters are worse now, but we’ll find a way.”

1 thought on “Gunfight at the Federal Reserve”