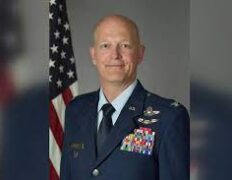 WHENEVER a traitor is caught dead-to rights, naturally, the rage elicited by the deceived is palpable. Boiling. This is the case in all walks of life; be it personal or professional. Now, magnify said treachery to the nth degree, that is, when it comes from a top-tier leader whose sacred mission is the safety of the nation! Understood?

AS such, it is not for nothing that the most recent GITMO detainee was booted,

The former White Hat officer who encouraged airmen and dependents to embrace Covid-19 booster shots is now detained in a cramped cell at Guantanamo Bay’s Camp Delta detention block, according to military sources.

As reported on Tuesday, USMC General David H. Berger removed Air Force Colonel Blaine L. Baker from the White Hat council after confirming the latter had authored a missive beseeching airmen at Altus AFB to get vaccinated and boosted in accordance with Secretary of Defense Lloyd Austin’s mandate an CDC Director Rochelle Walensky’s Covid-19 guidelines. That document, Real Raw News has learned, threatened airmen with punitive action, including potential separation from the Air Force, unless they strictly adhered to vaccine protocol.

What Cyber Command discovered, our source said, was shocking. Baker had never gotten a Covid-19 vaccination. In March 2021, when the clot shots became widely available, Baker submitted a “religious exemption” form to the Department of Defense, and Lloyd Austin personally approved the request.

So, Baker, on one hand, is threatening unvaccinated airmen with disciplinary action; on the other hand, the hypocrite has refused the clot shot.

“When Gen. Berger saw it, he pulled Baker’s entire service jacket,” our source said. “And everything he saw just added more fuel to the fire.”

Baker, it turns out, had been aligned with the enemy all along, and the scope of his crimes went far beyond endorsing vaccinations.

Gen. Berger uncovered documents proving Baker had conspired with Secretary of the U.S. Navy Carlos Del Toro, a Biden sympathizer who is not even American by birth, to disrupt two Baltic Sea gas pipelines that linked Russia and Germany until they both sprang major leaks last week. The paperwork, though vague, mentioned using a P8 Poseidon anti-submarine aircraft to “inhibit” the flow of fuel between Europe and Russia.

Although the Boeing P8 is not a land-attack plane, it can be retrofitted with torpedoes and ground attack weapons. Moreover, a P8 was the only military aircraft detected above where Nord Stream detonations took place.

“General Berger now believes Baker had a hand in this, and it was his intention to blame Russia. Typical false flag. Russia rightfully denied involvement, but the MSM and the Biden regime have convinced America it’s Russian sabotage,” our source said. “Based on his findings, Gen. Berger coordinated with JAG to have Baker arrested on charges of treason.”

On Wednesday, October 5, a USMC Scout-Sniper squad infiltrated Altus AFB and formally arrested Baker, charging him with sedition, treason, and conspiring with the enemy. He was handcuffed, taken into custody, and flown to GITMO, our source said.

“This is the end for Baker. He will now face military tribunal,” our source said. “And soon we’ll have Del Toro, too.”