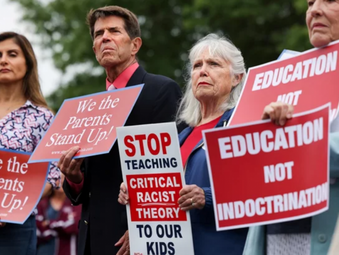 IT is hardly a secret, nor is it news, to learn that whatever the power-hungry left touches turns into poisonous rot. Even more so, when it comes to the kiddies, well, its ruins will reverberate for generations to come. But atop their trash-heap lies a hierarchy: endemic racism taught in public schools, as well as so-called “gender-affirming” care — in reality, the most heinous child abuse imaginable; the effects of which last for the rest of their lives.

SO, let the following brilliant analysis by Kali Fontaniila, a 15-year veteran high school teacher in California, serve as an urgent spotlight onto the (non-transparent) subject matter of the overall indoctrination and penetration into the hearts and minds of students, K-12. Effectively, it amounts to nothing less than racism on steroids! As to the whys and wherefores, listen up:

AS per the above referenced kiddie crime, that is, “gender-affirming” care — naturally, masked under a touchy-feely umbrella — let Tucker Carlson set the stage.

STILL yet, to get from there to here, know this: the ground for ‘woke education’ must be compared to a years-long planned assault, not unlike generals who strategize for the ‘mother of all battles’ — albeit, this one to capture the kiddies for generations to come! And to be perfectly frank, the evil-doers are winning!

BUT the ‘icing on the cake’ …. as per the madness of woke, self-proclaimed elitists when it comes to mutilating the kiddies, let the following depths of their depravity sink in:

2 thoughts on “How Racism is Taught in California’s High Schools …. America At-Large + Yale Prof Slammed For Bragging About Helping 3-Year-Olds Transition On Their ‘Gender Journey’”