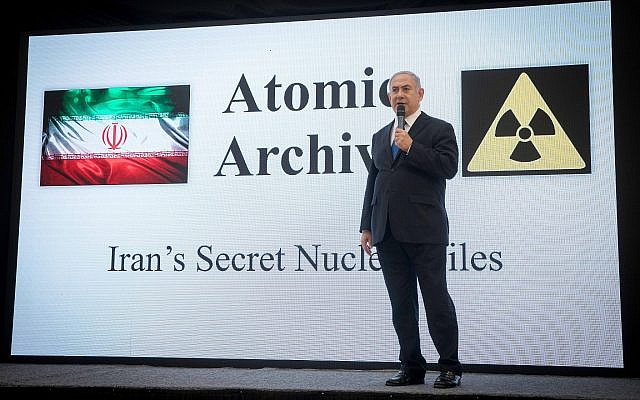 WHILE PM Bennett, Israel’s narcissistic leader presents evidence of the nuclear cover-up by Iran’s genocidal regime, the fact is that he would have nothing to crow about, but for the heroic operation which took place under his predecessor, PM Netanyahu. Though far from a saint, he was not in the hip pocket of MK Mansour Abbas, an Islamic leader in the Muslim Brotherhood, as is PM Bennett.

CLEAR as a bell. In fact, this “feat of magic” under Netanyahu’s leadership led Iran’s mastermind terrorists to admit:

SO, here we are, 4 years down the track, and Bennett does what he does best, that is, struts, preens, and puffs himself up, as if he is the hero of the day! What a low-life.

Prime Minister Naftali Bennett publicly revealed documents which he said proved that the Iranian government had crafted a cover story about its rogue nuclear program for a watchdog agency, adding that he can prove Iran has been consistently lying to the international community about its nuclear development.

In a video released by his office on Tuesday morning, Bennett began the video by addressing Iranian Foreign Minister Hossein Amir-Abdollahian’s claim that allegations of Iran spying on the International Atomic Energy Agency (IAEA) were “Zionist lies.”

The Iranian regime won’t want you to watch this video until the end.

“Spreading lies? Come on. I’m holding the proof of your lies right here in my hands,” Bennett said, then shuffled documents which he said were classified Iranian intelligence ministry papers obtained by Israel.

“You see, after Iran stole classified documents from the UN’s Atomic Agency, Iran used that information to figure out what the atomic agency was hoping to find, and then created cover stories and hid evidence to evade their nuclear probes.

“So how do we know this? Because we got our hands on Iran’s deception plan a few years back. And it’s right here in my hands. Here it is, in the Persian language, hundreds of pages marked with the stamp of Iran’s Ministry of Intelligence.”

In 2018, Israeli operatives from the Mossad intelligence agency pulled off a daring raid of a Tehran warehouse, spiriting critical papers about Iran’s nuclear program out of the country.

Bennett noted that the papers contained notes by prominent nuclear scientist and former Iranian Defense Minister Mohsen Fakhrizadeh, who is widely believed to have been assassinated by Israel in November 2020.

“Sooner or later they (referring to the atomic agency) will ask us — and we’ll need to have a comprehensive cover story for them,” Bennett quoted Fakhrizadeh.

“Iran lied to the world, Iran is lying to the world again right now, and the world must make sure that Iran doesn’t get away scot-free.”

After the video was released, Bennett tweeted a link to the Iranian intelligence documents and invited the public to view them.

The revelation comes as nuclear talks between Iran and the West in Vienna appear doomed to fail.