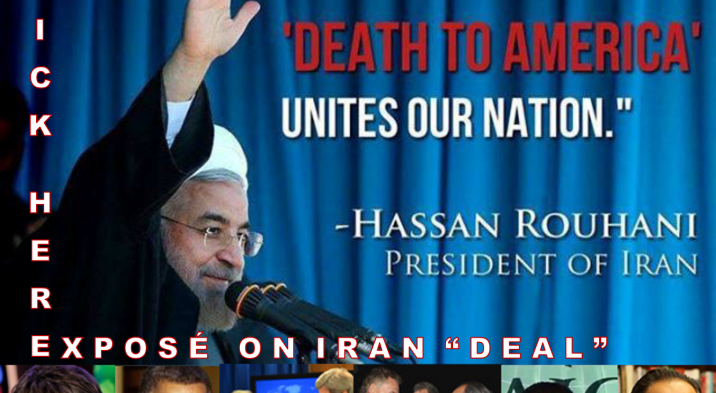 THOSE of us whose professional business is mired in the jihadi muck are all too familiar with the deep state’s betrayals towards Israel, and, by extension, the blow-back visited upon U.S. national interests.

COUPLE the above with living in Israel and having a bird’s eye view, well, the betrayals are actual cannon fodder! No sh*t.

MOST enragingly, here we go again, déjà vu-like — as if 2015 never happened, and, with it, the entire capitulation to Iran’s terrorist masterminds via the monstrous machinations of Barack HUSSEIN Obama’s devilish plans! Once again, it is laid out below in plain view.

HOW much heavy-lifting do we have to do??

House of Bribes: How the United States led the way to a Nuclear Iran is a product of the New Coalition of Concerned Citizens. Contributors are available for interviews to interested radio shows and television programs.

CAROLINE, take it away!

Now that U.S. President Joe Biden has agreed to an even more dangerous nuclear deal, Israel must prepare to be scapegoated.

The paper revealed that despite the fact that the U.S. Justice Department knows the identity of the IRGC officers leading efforts to murder Bolton, and has the evidence to indict them, the Justice Department is refusing to issue indictments “for fear that it could derail [the administration’s] drive for a nuclear deal with Iran, currently nearing completion in negotiations in Vienna, Austria.”

Under U.S. law, it is an act of war for a foreign power to attempt the assassination of U.S. citizens in the United States. So by rights, at a minimum, the Biden administration should be expected to pursue Bolton’s would-be assassins with the full force of law. But in a testament to the obsessive-compulsive nature of the administration’s pursuit of a deal with Iran, not only are U.S. President Joe Biden and his administration not retaliating, they are also giving the Iranian regime a free pass to wage war against America on its sovereign territory.

The administration’s decision to let Iran’s efforts to murder U.S. citizens and former senior U.S. officials slide is in keeping with its policy of genuflection to the mullahs. And of course, that genuflective policy is most graphically and dangerously expressed in the deal the administration has negotiated with Iran in Vienna. The deal, which relates to Iran’s illicit nuclear weapons program and to U.S. economic sanctions on the regime, is expected to be formally concluded within days.

Last week, former State Department official and Iran sanctions expert Gabriel Noronha posted details of the far-reaching concessions the Biden administration has already made to the Iranians in Vienna. Noronha wrote on his Twitter feed that he received the details of U.S. concessions from members of the U.S. delegation and members of a European delegation to the talks. Noronha’s sources are former colleagues whom he refers to as “career” officers rather than political appointees. As he put it, they “are so concerned with the concessions being made by [U.S. delegation head] Rob Malley in Vienna that they’ve allowed me to publish some details of the coming deal in the hopes that Congress will act to stop the capitulation.”

It should be noted that Noronha’s colleagues’ concerns are not theirs alone. Three members of the U.S. delegation, led by Malley’s deputy Richard Nephew, quit the talks a few weeks ago due to their conviction that Malley’s capitulation to the Iranians endangers the United States.

Noronha’s former colleagues who remain on the U.S. delegation and on one European delegation told him that, acting with the full support of Biden and Secretary of State Antony Blinken, Malley has already agreed to all of Iran’s demands for the removal of sanctions against Iranian terror commanders and Iranian institutions and individuals involved in Iran’s missile programs, its weapons of mass destructions programs and its terror operations.

Malley, who is known for his radical positions favoring Iran and implacably hostile to Israel, is not merely leading the negotiations in Vienna. Operating with the full support of Biden and Blinken, Malley is responsible for all of the administration’s Middle East policies.

Noronha’s colleagues characterize the all-but-completed deal with Iran as a complete U.S. surrender to Iran’s demands. Their claims were borne out last week by a statement from Russian Ambassador Mikhail Ulyanov. As Russian President Vladimir Putin deployed forces by the tens of thousands to Russia’s borders with Ukraine in the lead-up to last month’s invasion, Malley appointed Ulyanov, who heads Russia’s delegation in Vienna, to serve as one of two mediators between the American and Iranian delegations. Ulyanov’s services were necessary because the Iranians refuse to sit in a room with Americans.

According to Noronha’s sources, Ulyanov has “essentially run” the nuclear talks—at Malley’s behest. And as Ulyanov said last week, “Iran got much more than it could expect. Much more.”

Malley has reportedly agreed to remove the IRGC from the State Department’s list of foreign terrorist organizations, in addition to withdrawing sanctions on Iranian terror masters and missile and WMD proliferators. He has also capitulated on nuclear safeguards. As Noronha detailed, the deal that Malley has negotiated includes weaker and shorter-term restrictions on Iran’s nuclear operations than Malley and his colleagues negotiated in the 2015 nuclear deal.

The moment the deal is concluded, and without congressional oversight, Iran will automatically receive $90 billion in sanctions relief. Iran will receive at least $50-55 billion in subsequent years from oil and gas sales since the new deal ends all sanctions on Iran’s energy sector.

The strategic implications of these cash injections are clear. As it did after it received a cash infusion of tens of billions of dollars with the implementation of the 2015 deal, Iran will now use its windfall to fund its proxies and its wars against Israel and the Sunni Arab states. In real terms, $90 billion in Ayatollah Ali Khamenei’s pocket translates into thousands more drones and precision guided missiles in the hands of Hezbollah in Lebanon, Hamas in Gaza, the Houthis in Yemen, the Shi’ite militias in Iraq and the Assad regime in Syria. It means more terror cells in Europe, North and South America.

The larger strategic significance of the nuclear deal is that Iran will expand its regional hegemony through its IRGC forces and its terror proxies, while operating under a U.N. Security Council- and U.S. government-sanctioned nuclear umbrella. Israel will find itself on the wrong side of the U.N. Security Council and—depending on who sits in the White House—on the wrong side of the U.S. government if and when it is compelled to strike Iran’s nuclear installations to prevent the theocracy sworn to its annihilation from acquiring the means to destroy it.

The Biden administration justifies its pro-Iranian and anti-Israel/Sunni Arab policy by claiming it is a means to disengage the United States from the Middle East at a time when Washington is keen to concentrate its resources and attention on Asia and the rising threat of China. While on its face this justification seems reasonable, it stands on a rotten foundation.

During his term in office, former President Donald Trump sought to minimize U.S. presence in the Middle East in order to focus U.S. efforts and resources in Asia to contend with the rising threat from China. To achieve this goal, Trump empowered America’s allies—Israel and the Sunni Arab states led by Saudi Arabia. He provided political, diplomatic, logistical, and when necessary, military support to ensure the success of their efforts to combat Iranian aggression against them.

Trump created institutional frameworks for cooperation between U.S. allies both by forging the Abraham Accords, which effectively ended the Arab conflict with Israel, and by integrating Israel into the U.S. Central Command and so fostering operational military cooperation between Israel and the United States’ Arab allies under the aegis of the U.S. military.

Biden’s policies are the polar opposite of Trump’s, both conceptually and substantively. Biden’s policies represent a reinstatement and escalation of Barack Obama’s policies for Iran and the wider Middle East. In contrast to Trump, Obama, Biden and their advisers believe that the United States’ Middle Eastern allies—Israel and the Sunni Arab Gulf states—maliciously worked for decades to entangle the United States in the wars of the Middle East. To disentangle America from the region and its pernicious “allies,” the Obama-Biden doctrine posits that the United States must realign itself away from its allies and weaken them, and towards Iran, which it must empower.

This brings us to Israel, and what its government must do in the face of the administration’s betrayal. Since supporting Iran and undermining Israel are the founding principles of Biden’s Middle East policies, they are not subject to change. Israel cannot influence them. It doesn’t matter how many times Israeli Prime Minister Naftali Bennett and Foreign Minister Yair Lapid gush about Israel’s “true friends” Biden and Blinken. They have chosen a path that is impermeable to reason and argument.

Rather than expend efforts to woo an implacably hostile administration—through futile mediation of other people’s wars and committing Israel to a policy of “no surprises” in its handling of Iran’s Biden-supported-nuclear program—Israel’s leaders must prepare for what awaits us.

We are about to be scapegoated.

In 2014-2015, in their efforts to sell their original cataclysmic nuclear deal with Iran, Obama and his advisers ran a campaign to demonize Israel and its supporters in Congress specifically and in U.S. public life more generally. Now that Biden has agreed to an even more dangerous nuclear deal, Israel can expect the demonization campaign that awaits it to dwarf its predecessor. In fact, as we see with the administration’s efforts to scapegoat Israel directly, through its media partners and through the Ukrainian leadership, for not being sufficiently anti-Russian, the campaign has already begun.

The Saudis and the Emirates clearly already recognize the sucker’s game Biden and his team are playing. Last Wednesday, the Wall Street Journal reported that Crown Prince Mohammed bin Salman of Saudi Arabia and Crown Prince Mohammed bin Zayed of the United Arab Emirates both refused to accept phone calls from Biden last week. Israel’s leaders should follow them in accepting reality and acting accordingly before the situation deteriorates still further.

Caroline Glick is an award-winning columnist and author of “The Israeli Solution: A One-State Plan for Peace in the Middle East.” This article first appeared in Israel Hayom.

1 thought on “Washington’s betrayal has only just begun”