Sperm in bags of potato ships – that is the way Palestinian terrorists smuggle sperm out of prison, a released terrorist prisoner told PA TV. Rafat Al-Qarawi, who himself claims to have fathered four children this way, explained that the terrorists smuggle out sperm in bags of potato chips that they reseal, mark with their name, and wrap in a certain way so that the family knows which bag contains the sperm: 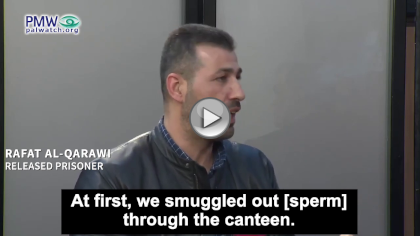 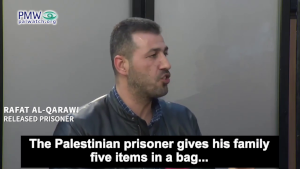 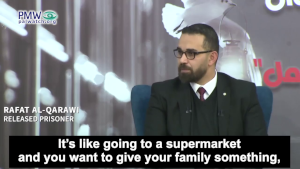 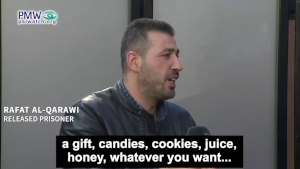 Al-Qarawi: “100 percent.”… We would mark the [bag] with the sperm inside it, mark it, and wrap it with strings and tie it the way we had told the family during the previous visit… We put the sample inside [a bag of] potato chips or cookies and resealed it professionally so that the prison guard or Israeli police officer would not be able to discern whether or not the bag had been opened. When you go out to the visit the bag is with you. No one touches it other than the prisoner. The one who comes to receive the sample is your mother or your wife… Of course everyone had their name written on their bag… The family goes out from the prison with the bag and goes to the Razan [Medical] Center [for insemination].”

Palestinian Media Watch has exposed that imprisoned Palestinian terrorists are able to smuggle out sperm to their wives. According to the PA, over time, 101 children have been fathered this way

Rafat Al-Qarawi – Palestinian terrorist and member of the Al-Aqsa Martyrs’ Brigades (Fatah’s military wing), who was arrested in 2006 and sentenced to 15 years for his terror activity during the PA terror campaign (the second Intifada, 2000-2005) – PMW was unable to determine the details of his activity. During his imprisonment Al-Qarawi fathered four children by smuggling out sperm to his wife. Al-Qarawi was released in March 2021.