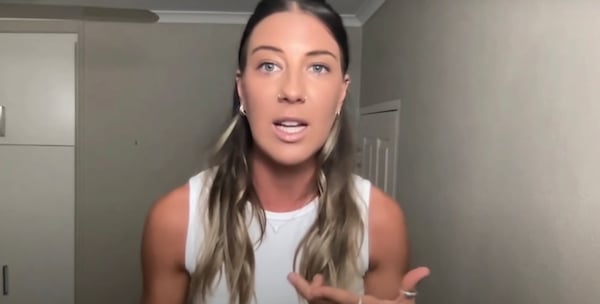 AS is said, the road to hell is paved with good intentions. Even more so, this is the case if the intentions are evil from the get-go. As such, let’s not pussyfoot around and pretend that the protection of public health is the impetus for the increasing amount of draconian mandates enveloping the west.

ATOP all of that, there is not a western democracy which can assert authoritative power for any medical procedure, let alone one which is based upon an experimental protocol, all their jive-talk notwithstanding.

SO, is it any wonder that much of the west is in revolt, up in arms, against such dictatorial measures, including within loosey-goosey western Europe?

A 26-year-old woman who had moved from Melbourne, Australia, to the country’s Northern Territory to escape the continuing lockdowns tells of being removed from her home by police against her will and taken to a quarantine center.

And she didn’t even have COVID-19.

“You feel like you’re in prison,” Hayley Hodgson told the British podcast UnHerd TV after her 14-day detention at Howard Springs, the 2,000-capacity COVID camp outside Darwin.

“You feel like you’ve done something wrong; it’s inhumane what they’re doing,” she said. “You are so small, they just overpower you. And you’re literally nothing. It’s like, ‘You do what we say, or you’re in trouble, we’ll lock you up for longer.’ Yeah, they were even threatening me that if I was to do this again, ‘we will extend your time in here.'”

On Tuesday, Northern Territory Police arrested three people who escaped from the Howard Springs facility. All three tested negative for COVID and were taken into police custody. Prior to their arrests, police blocked traffic as officers wearing face masks searched cars, causing a large traffic backup.

Hodgson said her ordeal began when investigators came to her home shortly after a friend had tested positive for COVID-19. Police had the license plate of her motor scooter to identify her as a “close contact.”

She said that when she was asked if she had been tested for COVID, she lied and said she had, setting in motion a series of extraordinary events.

“So then the police officers blocked my driveway,” she said. “I walked out and I said, ‘What’s going on, are you guys testing me for COVID? What’s happening?’ They said, ‘No, you’re getting taken away. And you have no choice. You’re going to Howard Springs. You either come with us now, and we’ll put you in the back of the divvy van.'”

Hodgson said she told the officers, “I don’t consent to this. I don’t understand why I can’t just self-isolate at home, like a lot of other people are doing.”

The officers, she said, replied: “We’ve just been told from higher up where to take you. And that’s all that there is.”

At the facility, she tested negative for COVID-19.

She said she knew when she took the test that it would turn out to be negative. She asked the woman at the center who conducted the test is she would be allowed to leave if she didn’t have COVID-19.

Howard Springs is regarded as a model by the Australian government, which is partnering with state governments to build “Centres for National Resilience” in Melbourne, Brisbane and Perth. They are expected to be completed in the next six months.

On Nov. 22, the chief minister of Australia’s Northern Territory, Michael Gunner, announced at a news conference that the army was transferring positive COVID-19 cases and contacts by army truck to the Howard Springs quarantine center.

He said that included 38 people who were not necessarily infected but were in “close contact” with others who had tested positive for COVID-19.

Gunner said he spoke with Australian Prime Minister Scott Morrison and is “grateful for the support of about 20 [Australian Defence Force) personnel as well as army trucks to assist with the transfer of positive cases and close contacts.”

The Northern Territory chief also announced the imposition of a “hard lockdown” on two communities, meaning people could leave their homes only for medical treatment or in case of a medical emergency.

AUSTRALIA – The army is now transferring positive Covid cases and contacts in the Northern Territories to ‘Quarantine Camps’ by army truck.

So it wasn’t a conspiracy theory then. #COVID19 #Australia pic.twitter.com/NfJzqrO1fz

At the news conference, angrily jabbing his finger repeatedly for emphasis, Gunner declared that anyone who opposes vaccine mandates, even if vaccinated, will be regarded by the government as an “anti-vaxxer.”

“If you support, champion, give a green light, give comfort to, support anybody who argues against the vaccine, you are an anti-vaxxer. Absolutely. Your personal vaccination status is utterly irrelevant,” said Gunner.

Australia 🇦🇺: "If you are against the vaccine mandate, you are an anti-vaxxer, even if you are personally vaccinated"

2 thoughts on “‘You feel like you’re in prison’: Aussie recounts ordeal in COVID camp – the west, where freedom came to die!”