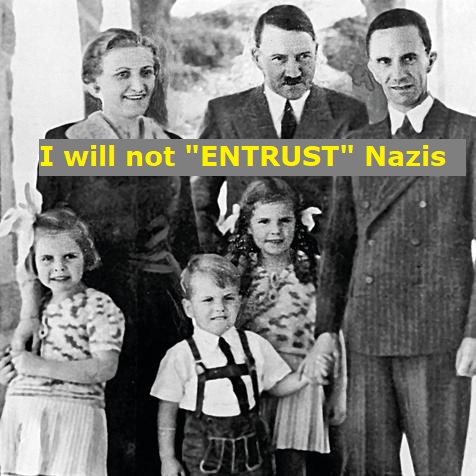 THE more that the powers that be scream to the heavens that the “science is settled” — an oxymoron, in and of itself, for true science is never settled — the more they are proven wrong. Deadly so. But they never shut their traps.

IN fact, every step of the way, clueless bureaucrats in charge of this and that national healthcare program — most prominently, within the heretofore “land of the free, home of the brave”  — can’t get their “science” straight. Indeed, see here, here, here, here, here, here, and here, regarding what real scientists have proven to be scientifically-based.

RESULTANT, akin to fetishists who stick to the same bag of tricks, regardless of the provable harm (physical and emotional) they cause, governmental so-called experts continuously double down in their attempts to maintain power and control. At all costs.

SIMILARLY, the Mockingbird Media enters the fray…go to marker 9:22 to catch a (totalitarian) whiff:

NOT only that, a TOP lab spilled the beans re the so-called variants, literally!

Watch it here on Rumble:

MAKE no mistake. Not a scintilla of said anti-freedom thrust has anything to do with the health and welfare of the masses. For if that was even remotely true, why would the rogue Biden regime let in countless illegals into the nation, many of whom are infected with covid, aside from all the other national security dangers associated thereof??

TRUTH dare be told, the above has been designed to usher in the “global reset“, and the rest is just dangerous jibberish. Hogwash.

INEXORABLY, more proofs of the same  abound— as per how well-designed and organized the totalitarians in charge are; the once liberal, freedom-based west has devolved into issuing dictates akin to Nazi-like mandates! Clear as a bell.

IN this regard, it makes total sense that a major German corporate player, ENTRUST Corp. (an Orwellian name, to boot), is owned by the descendants of a TOP Nazi clan! They are now in charge of producing UK VAX PASSPORTS, mind you, with a goal towards cornering the global market. History repeats.

I knew next-to-nothing about the Quandt family prior to watching this video [go watch!]. I knew the name was associated with BMW, but not much else. Thanks to Amazing Polly who put the video together, I learned quite a bit about them, including that they own major interest in the company that’s putting out the UK Vaccine Passports.

Isn’t it quite convenient that a company who created technology to segregate (in their eyes) undesirable members of society (unvaccinated) has deep family roots with the Nazis, who did the same thing in their own way?

Günther Quandt was a “German Industrialist” whose legacy includes BMW automobiles and Altana (chemicals), a spin-off of the VARTA manufacturing company he acquired shortly after World War I. During World War I, he and many members of his family supplied the German military with uniforms, which is where much of his start-up capital originated. He used that money to purchase Accumulatorenfabrik (AFA) AG, a battery manufacturer that became VARTA, a potash-mining company, multiple metal-working companies, and large shares in BMW and Daimler-Benz.

His first marriage resulted in two sons, Herbert and Helmut. His first wife died of the Spanish Flu in 1918, and Helmut died of appendicitis in 1927. He remarried to a woman named Magda Ritschel in 1921; they had a son named Harald. Gunther and Magda divorced in 1929; Magda remarried to Joseph Goebbels (with Adolf Hitler serving as Best Man) – and the wedding took place on some of Gunther Quandt’s property. This photo shows the wedding between Joseph and Magda, with a young Herbert at their side and Adolf Hitler close behind them.

Gunther joined the Nazi Party in 1933 shortly following Hitler’s rise to power. At one point just prior to this, Gunther was arrested under “false pretenses” and Goebbels himself put in a good word for him to ensure his quick release. There must not have been much, if any, animosity between the two men.

In 1937 he was awarded the title of Wehrwirtschaftsführer by Hitler himself. This made Gunther a “Leader in the Defense Economy.” As the war began, Gunther’s companies supplied ammunition, rifles, artillery, and batteries via the use of slave labor sourced from concentration camps in at least three factories. In AFA’s factory (the predecessor to VARTA), there was an execution area set up. The “free” (slave) labor for his various industrial ventures is what earned the family a large base for the wealth they enjoy today. In other words, their family success was built upon slave labor. One of the prosecutors from the Nuremberg trials was on record as stating that if they had the evidence back in the 1940s, “Quandt would have been charged with the same offenses as (German industrialists) Flick, Krupp, and the directors of IG Farben.”

His wealth and stake in many companies transferred to his sons Herbert and Harald upon his death.

There’s quite a lot more to the Nazi connection. Here is an award-winning documentary regarding the family’s refusal to acknowledge their war crimes (German audio with English subtitles):

Gunther’s older son, Herbert, assisted him with many of his World War II endeavors, including the extensive slave labor. Herbert was awarded a position on the board of AFA/VARTA in 1940 and was made the director of Pertrix GmbH (a British subsidiary).

During World War II, he was the “director of personnel” at his family’s factories. In other words, he was in charge of ensuring they had enough slave labor to keep up with production. He “personally oversaw an estimated death of 40 to 80 people each month through the use of slave labor with each slave staying alive approximately 6 months.”

When Gunther died in 1954, Herbert and Harald inherited about 200 businesses. In 1959, he increased his stake in BMW from 30% to 50% and financed the initial design and production of the BMW 700, which is said by many to be a turning point that “saved the company.” The money to do so, of course, came primarily from the pure profits he enjoyed due to the use of slave labor during the war.

In 1960 he married his secretary and third wife, Johanna Bruhn; they had two children, Stefan Quandt and Susanne (Quandt) Klatten. Stefan now holds 23.7% of BMW and Susanne owns 19.2%. Both have been on the Board of Directors at BMW since 1997, along with involvement in several other lucrative business ventures.

In 2013, Data Card Corp bought Entrust Inc. for $500 million in cash. Entrust CEO Bill Conner says that “this is about the next generation for finance. Your phone becomes a virtual smartcard.” And enhanced tracking device.

And now they’re going to be in charge of tracking your “vaccination status” – and, more than likely, your location, how many people you’re with, etc. for “social distancing” purposes. Anything that is authoritarian, creepy, and Covid-related, they’ve got it covered.

I am vehemently against “Vaccine Passports” or any other sort of tracking related to Covid-19 or any other health activity – or any activity period. The corporations are doing the work for the government to enact policies without having to go through the proper legal channels. The government doesn’t have to pass a passport law if all the big businesses require such an asinine thing for entry in the first place.

Beyond that, the evidence is clearly showing that “the holy and mighty vaccinated” are getting sick at a rate equal to or greater than the “deplorable, dirty unvaccinated” and that the vaccines are “not effective against new Greek Letter Strains.” So if they’re not protecting anyone, why the continued push?

And until more people wake up and take action against this insane worldwide dictatorship built around a sickness with a more than 99% chance of survival, they’ll just keep going… and going… and going… and going… with this nonsense. The motives for a controlled partnership between government and corporations (fascism) should be obvious, but many choose to ignore it in lieu of being on their virtue-signaling high-horse.

Thus it only makes sense that the heirs to powerful Nazis, whose wealth originates from slave labor and concentration camps, are in charge of the tracking device that they’re going to force upon the UK and beyond to separate people and declare some of them as less-than-human.

This exclusive Greg Reese report exposes a digital vaccine passport company that is linked to a prominent Nazi family.

4 thoughts on “Digital Passport Company Run By TOP Nazis – The Nexus Between “Show Me Your Papers” To Live Freely + History’s Mass Murderers! By Adina Kutnicki”