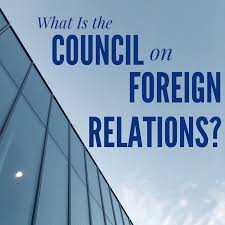 KNOW THIS: the last time that the Council on Foreign Relations (CFR) was mentioned at this end was when the below two-part interview took place, November 7, 2017. Wait and see …
AND while not one to mix apples and oranges, in a manner of speaking, this interview is entirely germane, that is, when it comes to the real power brokers who run U.S. foreign policy vis-à-vis their foreign puppet-leaders — in this instance, Israel, for the most part, who do as they are told.
IN this regard, how many have wondered why Israel — fielding the strongest and most lethal army in the Middle East, as well as having the ability to punch far above its weight against the west’s most fearsome forces — has yet to bury Hamas, war after war?? Well, wonder no longer.
AS such, this puzzling behavior can be directly tied back to the initial and out of the blue political rise, grooming, if you will, of former PM Netanyahu, yes, Bibi!
MOVING right along, how many realize that throughout his entire political ascendancy he (other top Israeli leadership, too) has been less than six degrees separated from the Council on Foreign Relations and its puppet-masters? Incontestably.
ALAS, when certain highly trusted policy-making types in Israel heard that a particular “connect the dots” mainstream interview was being conducted at this end re some delicate matters, the consensus was: do not leave out Bibi’s connection to the CFR!
SO, in furtherance of much needed airing re many jarringly, counter-intuitive policy moves made by Israeli leadership, lo and behold, an understanding of this knowledge sets the stage and shores up today’s video (featured at the end), thus, exposing three centers of evil in NYC! More than intersecting …
BEFOREHAND, let’s commence our geo-political journey with the below excerpt from the aforementioned two-part interview…. it can found as the reader scrolls down the above link to the second part. Midway.
…... Now, there are many reasons (some are detailed at this interview, others are not) why PM Netanyahu continually caves and fails to execute his sworn obligation to vanquish declared genocidal foes. Unfathomably, he opines the same balderdash mantra, over and over again, “quiet will be met with quiet”, as if that means anything but hot air. Thankfully, there are some rational Israelis who understand when smoke is being blown, as former MK Dr. Ben-Ari intoned:

“Ben-Ari also criticized Netanyahu for stating at the beginning of the operation that “quiet will be met with quiet”, saying that “quiet is not a working plan, it is not an ideology. We have to say that this is our country and anyone who threatens that will not be here.”

Nevertheless, in a nutshell, the following topic must be explored, particularly to shed light on what continually appears to be irrational decision-making coming out of PM Netanyahu’s administration. Admittedly, the following is mostly verboten in “polite” society, but that doesn’t mean squat at this end.

So in furtherance of some much needed disinfectant, we cannot veer away from a pressing question, the elephant in the (Israeli) room: how did a 27 year old, even though an MIT grad (as an aside, a school which I feel great kinship towards), attract top flight American movers and shakers to an anti-terrorism conference in 1979, which he hosted in memory of his fallen brother Yoni? Get this: in attendance were CIA Director George Bush, Council On Foreign Relations (CFR) executive George Shultz, and Richard Perle, President’s Reagan’s chief arms negotiator. Hmm.

Indeed, no one has to tell me the ins and outs of counter-terror conferences, and the basic type of invited guests. Generally, such a gathering would attract qualified law enforcement personnel, perhaps even a Police Chief or two. Otherwise, it would involve counter-terror professionals, noted academics in security and related arenas, maybe some lower level government officials and a smattering of technical experts, be they bomb-techs or the like. True, if he was in the throes of his career as head of a counter-terror institute (like Director of Israel’s “ICT” International Institute for Counter-Terrorism – http://www.ict.org.il/ ), instead of some 27 year old pisher, well, that’s another scenario. The sky could be the limit.

Moving right along…only three years later, in 1982, Israel’s Washington ambassador, Moshe Arens, plucked Netanyahu to be his deputy. Credo que absurdum, how did such a fortuitous posting occur? Manna from heaven? Accordingly, even the not so doubting Thomases understood that something was amiss and pressed Arens for an explanation. And explain he did:

“People got a good laugh when they heard I phoned a furniture factory (where Netanyahu was then employed) to find a deputy. What sold me on Bibi was his organization of the anti-terror conference, and the strong impression he made on the American leaders who participated.”

Do pigs fly? Do ambassadors become easily impressed by someone’s organizational skills, however adept? Heck, if this was remotely true, I would be running Israel! I am a master at said domain and have many heavy-weight contacts who would attest to said organizational creds, never mind my other fortes.

Lo and behold, the 2001 CFR annual report, listed Moshe Arens as a member of the CFR’s Foreign Advisory Committee. Incidentally, the PLO’s Hanan Ashrawi was next in alphabetical order. Oh joy. Interesting too. Furthermore, Arens admitted that Bush, Shultz, and Perle “advised” him to advance Netanyahu’s career. Naturally, he did.

Yet, the real elephants remain: why did they groom him? and to what end?

Concomitantly, one has to understand what the CFR represents in world politics, let alone among American (and Israeli) power brokers – http://reality-bytes.hubpages.com/hub/What-Is-The-Council-Of-Foreign-Relations.

“The Council of Foreign Relations was founded in New York on July 29,1921. It was based on a similar British Council which called itself The Royal Institute of International Affairs (RIIA). Both of these organizations was meant to work as affiliates, instead they became separate and independent of each other, they do however maintain a casual acquaintance.

The meetings of the Council of Foreign Relations are held in secret outside the scrutiny of the public. The only way that a person can become a member is by invitation only. Similar to the Trilateral Commission the list of members is available to the public. The CFR publishes a periodical called “Foreign Affairs” which is perhaps the most influential publication to be printed. The Council of Foreign Relations are located at the Harold Pratt House, 58 East 68th Street in New York City, New York 10021.

The Council of Foreign Relations was almost entirely composed of people from J.P. Morgan interests. In 1927 the Council gained impetus with funding coming from both the Rockefeller and Carnegie Foundations. John W. Davis was the founding president of the CFR, not only was he a millionaire but he was also the personal attorney for J.P. Morgan. other members of the CFR included names like Henry Davison, Thomas Thacher, Harold Swift, W. Averill Harriman, John Foster Dulles, Allen Dulles, Thomas Lamont, and Paul Cravath. Paul Warburg the creator of the Federal Reserve as well as Mortimer Schiff were also members as well as J.P. Morgans partner Russell Leffingwell, and various other partners of the Morgan Dynasty.

Although mostly secretive it is believed that funding for the CFR came from large banking interests and financial interests like Morgan, John D. Rockefeller, Bernard Baruch, Jacob Schiff, Otto Kahn, and Paul Warburg. Today the funds to continue the Council of Foreign Relations is received by large Corporations like Xerox, General Motors, Bristol-Meyers Squibb, Texaco.

Just like the Trilateral Commission the CFR tries to appear to be a humanitarian committee to the public. The Annual Reports issued by the CFR actually just consists of a smoke and mirror public image.”

Due to the above information – and much more – is it any wonder that PM Netanyahu is unable to bring Hamas to its knees, thus operating solely in Israel’s interests, as opposed to following orders from Washington in general, and Barack HUSSEIN Obama in particular? Into this fiery mix, the Obama administration is in lock-step with the Muslim Brotherhood, of which Hamas is its Egyptian progeny. A + B….Hamas will not be eliminated. Period. …..continue here ….

BACK TO THE PROMISED FEATURED VIEW & ITS BOTTOM LINE CALCULI:
FIRST, ignore all the syrupy, soothing, intellectual-sounding, authoritative messaging, and gobbly-gook from those spouting platitudes within the attached video. Yes, their vested interests lie elsewhere, that is, not in America’s direction!
RESULTANT ….
“The city that never sleeps is home to three centers of evil, two of which are still active.

Alex takes you on a historical tour of Jeffrey Epstein’s blackmail sex dungeon townhouse, the headquarters of the CFR and the UN building.”

PAY special heed to the 16:58 marker point … listen up to what follows … clear as a bell … the smoke will disappear …