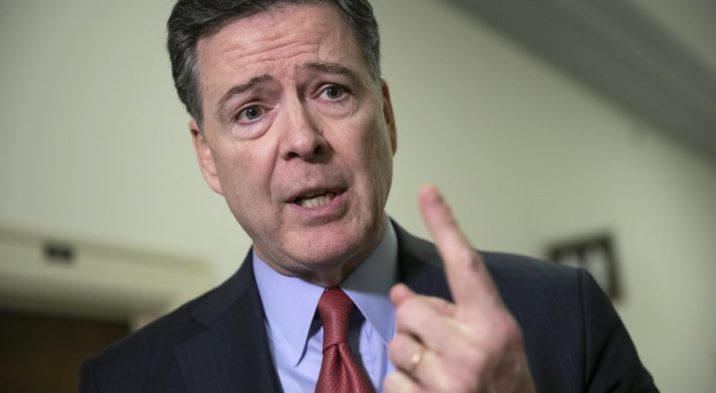 IT was reported on June 3, 2021 that an unrepentant, fire-breathing, smug, and beyond indignant James Comey stood before a Military Tribunal to hear the devastating charge-sheet against him.

ALONG this smug-like trajectory, countless refuse to believe what runs contrary to their all-powerful, holier-than-thou, anti-American, and anti-freedom ideology, that is, their true religion of choice.

EFFECTIVELY, disguised under the cloak and banner of “saving democracy”, every heinous action is not only permissible but considered obligatory — in their quest to bring down America as a Constitutional Republic. Murdering anyone who stands in their way, well, is as bothersome as swatting flies. Full-stop.

ALL of which brings patriots (wherever you may reside) straight back to the here and now.

INDEED, those who recognize good versus evil, right versus wrong, justice versus injustice, truth versus lies — with all the nuances in between — will be relieved that another parasitic, deep state menace will, in short order, be dispatched to the hell-fire awaiting him. Earned. Comeuppance.

AND, one more thing: Comey, up yours!

On Friday, June 4, a military tribunal at Guantanamo Bay found former FBI Director James Comey guilty of treason and murder and sentenced him to death by guillotine, a symbolic gesture since Comey seemed to take perverse pleasure in the beheading of others.

First to testify was former FBI field supervisor Clifford Colvin, who from 2015-2017 worked under Comey on clandestine “beta tests” that involved abducting and executing vagrants, society’s discarded homeless population. Pressed by Vice Adm. Hannink, Colvin gave an impassioned description of how Comey’s private “hit team” sought out and targeted persons least likely to “have someone report them missing” and often held joint operations with the Federal Emergency Management Agency. Together, often during natural disasters, they would illicitly beguile the homeless into believing the federal government had sent them on a mission of mercy, to feed and shelter the hopeless and the forgotten. Colvin’s statement corroborated testimony given by Derrick White on day 1 of Comey’s tribunal.

“I deeply regret what I’ve done. I regret following unlawful orders. I own my actions, though, and am prepared to answer for my crimes. The directives came down from James Comey,” Colvin said.

“And James Comey had a hand in the murder of Derrick White’s father? And the others who went to the guillotine? How exactly were victims selected? Did Comey personally tell you who to target?” Vice Adm. Hannink asked.

“We were told to use our discretion, but only select homeless, vagabonds, drug addicts, those type of people. It’s not like James Comey gave us a list of names. We were told the operation was part of a psychological stress test to see how people reacted when faced with certain death by unconventional means,” Colvin explained.

Colvin elaborated on his story, claiming that Comey’s endgame, had it succeeded, would have seen a nationwide roundup of patriots and militia members, all of whom would have been shipped to FEMA camps to await execution by guillotine. Colvin said the FBI and FEMA had “practiced” on countless homeless people dating back to Hurricane Katrina. In 2008, when Obama took office, the FBI began accelerating the program, sometimes executing as many as 50 homeless a week.

“Do you know for certain that Obama instructed Comey to carry out these instructions?” Vice Adm. Hannink asked.

“I cannot. My orders came from James Comey,” Colvin said.

Comey, who had sat silently through much of Colvin’s testimony, abruptly interrupted the witness, calling him a “bold-faced liar who was obviously paid to give false testimony.” Comey said he rebuked Colvin’s falsehoods and pleaded with the tribunal to discount “blatant lies” designed to wrongfully incriminate him.

But Colvin stood ground, leaping to his feet and pointing a rigid index finger in Comey’s direction. “At least I admit I deserve what fate comes my way. You are a sick man, Comey. You ordered me to order others to execute innocent people, for no other reason than to satisfy your perverse, sadistic mind.”

“Comey’s hands didn’t release the blades. He’s far too much a coward himself, so others did his dirty work. Yet he was sloppy enough to implicate himself with paperwork, which JAG found with little effort. He can deny whatever he wants, and witness testimony aside, these documents alone inculpate Comey in one of the greatest massacres against Americans. Let me be clear: per the Office of Military Commissions, Comey did not have to release the blades to be found guilty of mass murder. That he knowingly took part in these crimes, if you officers accept that, is evidence enough to convict. The ball, as they say, is in your court,” Vice Adm. Hannink finished.

Fifteen minutes later, the panel delivered its verdict—guilty on all counts, and a recommendation that Comey be executed the very way he had ordered the execution of so many others, the guillotine.

Vice Adm. Hannink said JAG had broad discretion in sentencing and agreed to putting Comey’s head on the chopping block, the sentence to be carried out no later than July 4, 2021.