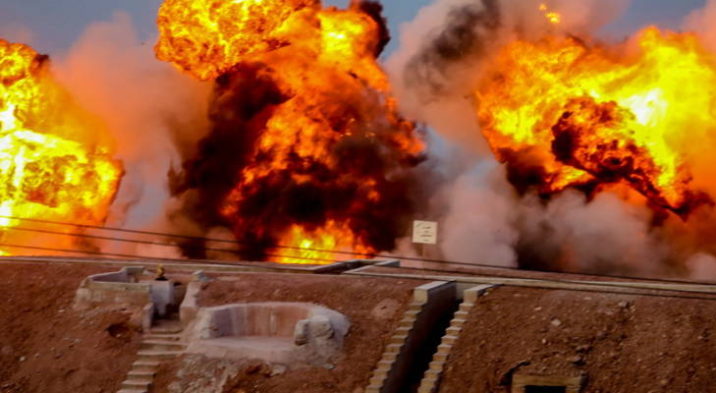 STRATEGIC PROPOSITION: Why would a leadership always stop short of victory, that is, agree to a ceasefire-at-all-costs, whether they admit it or not?

As Israelis were forced to hide in safe rooms and to run to bomb shelters – hither and yon for two weeks – from an unprovoked, massive, non-stop onslaught of rockets and missiles via jihadi terrorists, an increasing segment of Israeli Arabs (mind you, beneficiaries of all of the political, social and economic rights afforded thereof) are waging an actual internal war against the majority Jewish population. Attacking any Jew will satiate their rage.

Indeed, a preponderance of the rampages are incited within mosques. But it is also the case that a ‘kosher’ seal of approval is sanctioned by their political and civic leadership, both inside and outside the Knesset. As such, when the dust settles, and it will, a reckoning with the aforementioned leaders (be they political or religious) must be a top strategic priority. Yes, whereas some are terming it a ‘civil war’, said assessment misses the target. Wildly.

For all intents and purposes, what appears to be a domestic rebellion has the core hallmarks of internal terrorism. This is so because when citizens want fellow citizens dead just because of who they are and what they represent – in this instance, Jews, and for no other reason – well, what differentiates them from outside terror operatives and their mastermind leaders who dispatch them? Not only that, when the enemy’s flag is being hoisted within the Jewish homeland, what more needs to be said? Alas, to pretend that what is isn’t is not only highly dangerous, but very debasing. It is akin to placing lipstick on a pig and expecting it not to come out with a wretched stink.

And while there is nothing new under the sun that jihadi terrorists continuously plot wars of annihilation against the children of Israel – after all, it has been ongoing for centuries – the fact of the matter is, by now, one should expect that Israel’s political leadership would have learned the most basic strategic lesson of all: never leave an enemy standing, to live to fight another day! Victory, above all else, must be the stated goal.

In this regard, the most intrinsic, significant, and basic question remains: when will PM Netanyahu – a highly intelligent, sophisticated man, an MIT grad, no less, and in power since 2009 – finally conclude that Hamas must be completely decapitated, alongside various hydra-like offshoots in the Islamic-ruled stronghold of Gaza, instead of capitulating, as always, to international arm-twisting via the ‘ceasing’ of the IDF’s massive firepower??

More pin-pointedly, at this juncture, Gaza must be deemed a terror state – with all the military hardware, trappings, attributes, armed force structure, etc., in tandem with the support of the world’s largest state sponsor of terrorism, that is, Iran. The aforementioned is not only a reasonable question and position to take, but a highly rational one on its face. For the stated record, the very same strategic inquiry and assessment took place during this writer’s interview with the Editor-in-Chief of Inquisitr.com, (in 2017), “Can Israel Survive As The Jewish State? – An Interview With Adina Kutnicki.”

Inexplicably, a main so-called strategic policy has been the bizarre concept of “mowing the lawn” – as if blood-thirsty Jew-killers can be cowed and bowed by what they have come to expect, that is, a ceasefire-at-all-costs, instead of full-out victory! Couple said strangeness with its counterpart, another counter-intuitive metric, “quiet will be met with quiet” – as if that is even a strategic policy within any third world country, let alone one with the strongest military in the Middle East, as well as one of the strongest in the world. Credo quia absurdum!

Alas, it is along a strategic continuum of terror, be it external or internal, that the leadership must not make the same grave errors. In other words, any half-cocked attempt to squash the current domestic terror war must be avoided. At all costs. Period.

Effectively, no amount of internal or external pressure dare be tolerated – when it comes to rounding up all those who terrorize Jews for being Jews in the Jewish homeland. At the same time, those who conflate Jewish aggression, in response to Arab terrorism, as two sides of the same coin, well, they are too mentally besieged to separate good from evil. These voices must be ignored.

To wit, it is at this exact moment in time that it behooves addressing the prescience of a much maligned Jewish leader, Rabbi Meir Kahane, may his memory be for a blessing.

Whereas it was never surprising that those opposed to a strong Israel – a nation full of non-bent Jews – became livid at the mere mention of his name, the fact of the matter is that for the ‘crime’ of telling uncomfortable truths to comfortable Jews (inside and outside Israel) he became a pariah. Persona non grata.

Never mind that he was a loyal and faithful MK (unlike a long list of Arab MK’s who support terrorism), still yet, he was viewed as a radical, at best, in Israel (and in the U.S). More specifically, it was his realistic, practical, staunch and unyielding positions, regarding how to deal with an increasingly hostile and aggressive Arab minority, which enraged and scared Israel’s appeasers the most. By the 1980’s, he became akin to “Public Enemy Number One”, inside and outside elected leadership.

Not only that, paradoxically, Kahane had more respect for the Arab minority than most from the political left. He understood that appeasement and patronizing would not quiet them down and turn them into loyal citizens. This insight led his political thinking; coupled with the knowledge that our Arab “cousins” lay claim to the entire Jewish homeland, therefore, they would do whatever it takes to wrest Israel from the hands of the Jewish people. Therefore,

“Kahane proposed an “exchange of populations” that would continue the Jewish exodus from Arab lands: “A total of some 750,000 Jews fled Arab lands since 1948. Surely it is time for Jews, worried over the huge growth of Arabs in Israel, to consider finishing the exchange of populations that began 35 years ago.” Kahane proposed a $40,000 compensation plan for Arabs who would leave voluntarily, and forcible expulsion for those who “don’t want to leave”. He encouraged retaliatory violence against Arabs who attacked Jews: “I approve of anybody who commits such acts of violence. Really, I don’t think that we can sit back and watch Arabs throwing rocks at buses whenever they feel like it. They must understand that a bomb thrown at a Jewish bus is going to mean a bomb thrown at an Arab bus.”

All of which brings this analysis back to the here and now. Ask yourselves: in light of the facts on the ground, will all those who prefer to tout their peace-at-all-costs bonafides, finally, admit that they have misjudged what underlies the raging domestic war spreading throughout the country, never mind the external force multipliers? Truth dare be told, anti-semitism is at its epicenter.

Most significantly, it took the knock-on effects of Kahane’s assassination (in 1991, in New York City) to open the eyes and ears of many, both inside and outside Israel; heretofore blind as bats to the worldwide scourge of Islamic-inspired terrorism. To said end, this writer wrote a highly acclaimed analytical assessment (first featured at Israel National News, afterward, cross-referenced at many strategic policy addresses) in 2007, “The Opening of Jihad on U.S. Soil.”

Conclusively, at this delicate, fork-in-the-road national juncture, we must demand – by shouting from all of the available rooftops – that the strategic template going forward by Israel’s so-called rational leaders, be they religious or secular, necessitates: there is no replacement for victory, and there is zero tolerance for those who dare to raise a hand against a Jew for the ‘crime’ of being a Jew in Israel!

7 thoughts on “When “Mowing the Lawn” No Longer Cuts It: The Knock-on Effects of a Failed Strategic Policy; Thousands of Rockets and Missiles! By Adina Kutnicki”