IT has always been known at this end that the fascist-left will do anything and everything to ensure that generation after generation ends up as dumbed-down as possible. It is all about power and control. Dependency. Period.

IN a nutshell, the less opportunities that are available to those entering the workforce, the more dependent they become on the government. Naturally, said reliance leads to compliance. This is not rocket science.

IPSO facto, the latest take-down in Boston of achievement-oriented classes has zero to do with the far-left’s babble re ‘racial inequality’ and so-called ‘equity.’ Hogwash. For if said mantra and excuse-laden narrative had even a grain or an iota of truth to its basis, well, ensuring that each and every public school student — regardless of the hue of their skin — has access to across-the-board rigorous standards would be priority number one. Full-stop.

New Jersey Kindergartners Are Being Forced Into P.C. Training

SO, aside from the comatose, the fact of the matter is the polar opposite. Yes, the biggest emphasis via the public school system is placed on how to turn out revolutionary activists; far-left foot soldiers — with nary a pretense re actual learning! After all, they have other priorities….

(This is Dr. Seuss’ view of those who would discriminate against others because they may have something someone else does not. Some Sneetches have a star on their bellies, and some of them don’t. IT can also be compared to pride or people who think they are better than someone else for some reason or another. It can also be about those who put down others simply to make themselves feel more important or valuable. The Sneetches that don’t have a star on their bellies are trying to be accepted but wind up being treated poorly. The point is that we are all more alike than we are different.)

YOU got that? Can you believe it? But there’s more.

VIDEO: Woman has little boy read ‘The GayBCs’ — a children’s book with terms like ‘bi,’ ‘coming out,’ and ‘queer.’ And the reaction is swift.

The 'progressive alphabet' for the next generation. God help us! pic.twitter.com/h7wPt6jdDN

BUT never mind. Adding insult to grave educational injury, how can it be that the all-powerful teachers unions still refuse to open up the classrooms, yet private schools have been open from the get-go of the Chinese virus and all is fine and well? 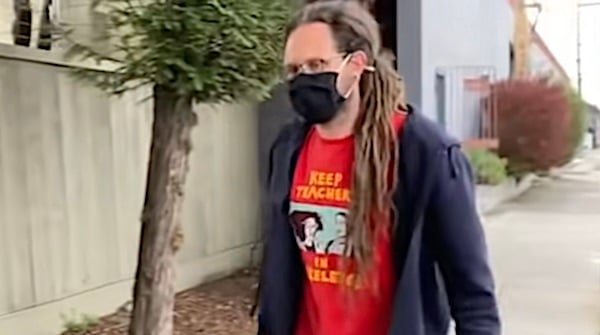 (Berkeley Federation of Teachers President Matt Meyer caught on camera dropping off his daughter at a private school. (Video screenshot)

YOU get the hypocritical picture….

STILL yet, before exposing the latest dumb-down — within leftist-led Boston — readers may recall the intellectual deconstruction and devastation wrecked within Bill de Blasio’s commie/Marxist-led department of so-called education. It was featured at this site. Beyond enraging.

School District Ejected Asian Students from ‘Students of Color’ Category Due to Satisfactory Performance: THE ‘DANGER’ OF A MERITOCRACY IN THE FACE OF FASCISM’S GRIP

ALAS, it is hardly unexpected that Boston jumped on board the wrecking ball, that is, of what is left of America’s public school (mis)’education!’

Boston Public Schools officials said that a program with advanced learning classes would be cancelled over concerns that the classes served disproportionate racial groups.

The program known as Advanced Work Classes was intended to serve high-performing students in the fourth, fifth and sixth grade. Students are encouraged to study their subjects in a deeper and non-traditional manner.

School officials became concerned when a report showed that the program was disproportionately serving white students, and underserving black and Hispanic students.

“This is just not acceptable,” said School Committee member Lorna Rivera in a school meeting in January. “I’ve never heard these statistics before, and I’m very very disturbed by them.”

Rivera cited one finding at one school that showed the program included 60% white fourth graders though a majority of third graders are black or Hispanic.

Superintendent Brenda Cassellius told WGBH News on Friday that they would put the program on hiatus over the racial findings.

“There’s been a lot of inequities that have been brought to the light in the pandemic that we have to address,” Cassellius said. “There’s a lot of work we have to do in the district to be antiracist and have policies where all of our students have a fair shot at an equitable and excellent education.”

Students would be eligible in the program if they scored high on a test in third grade. Of those, participants were chosen by lottery. Officials said 453 students were invited to the program last fall, 143 students applied and 116 enrolled for the 2021 year.

Cassellius said students already enrolled in the program could continue, but it would be phased out for fourth and fifth grades.

Pray tell, whose fault is it that Asians (a minority too…many of whom come from first- generation immigrant families, and from financially disadvantaged homes) are atop the educational heap? Could it be that their ‘tiger parents’ stress and expect educational excellence — despite the piss-poor curriculum — and ensure that their kiddies take advantage of other resources for learning?

AND another thing: Why is it that Blacks and Hispanics perform exponentially better in Charter schools, unlike in mega-funded public schools?