KNOWING more than a thing or two or three about over-priced preparatory day schools, their counterparts in the high school system, and the inside and outside of top-tier academic institutions across the American landscape, this much can be taken to the bank: Most are not even worth the wildly-hyped sheepskin’s they hand out, never mind the over-inflated sticker prices! On the other hand, there are a (paltry) few which deliver the goods and are more than worth the investment, but let’s leave that for another discussion. Regardless, do trust this personal (and professional) assessment  — “social justice warrior” brainwashers, be damned.

THAT being established, the best advice offered at this end  — again, from a “been there, done that” perspective — is derived from a long-standing axiom: BUYER BEWARE!!

SIMPLY put, when examined from a parental-consumer lens and calculus, all angles must be considered and investigated. Not only that, since this investment is the most important and, more than likely, the biggest, it behooves vigilant and diligent oversight, however long it takes.

MORE specifically, all academic teachings, moral foundations, and overall fundamentals must be on the table and measure up to maximum scrutiny. If not, garbage in, garbage out should be expected. Understood?

AND as a knock-on effect and outgrowth of this newly-held consumerist perspective comes empowerment. In other words, instead of being in awe of the “name-brand” of this and that school, well, arm yourselves with as much information as possible — yes, the after-glow will recede as fast as a whore leaves her John! No kidding.

INDEED, in the same manner in which these institutions interview the students and parents, that is, as if deigning them the favor of all favors, it is advised within to “turn the tables.” Effectively, the parents should be interviewing the headmasters! Absolutely. After all, if parents are entrusting their most treasured among their treasures, why wouldn’t they ask question after question and demand honest answers? Politely, of course.

SO, it is alongside this take-charge mind-set that parents not only have a right to monitor the institution’s goings-on but an obligation. The above list of advice can go on and on…..

ONTO Dalton….and the rest of the anti-American academic halls of disrepute!

One of the richest private schools in America is melting down, and predictably for 2020, it’s over insane racial grievance demands from groups the school has spent years coddling. And once again, these demands have nothing to do with achieving real racial equality. Instead, they’re a play for wealth redistribution, from the functional parts of American life to its most useless political parasites.

The Dalton School is a century-old private school at the heart of the Upper East Side. As a school for New York’s liberal upper class, it has always rigidly followed the liberal upper class religion. And in 2020, that means suicidal racial politics. By any objective measure, Dalton is one of the most liberal schools one can attend in New York. After the death of George Floyd, the school launched a 31-part racial justice initiative with objectives like “Develop a racial literacy curriculum for grades K-8” and hiring more non-white teachers.

None of it mattered. Dalton administrators have been served with an 8-page list of demands, endorsed by more than 100 of the school’s teachers and staff. The demands are staggering in scope. Twitter user Colin Wright highlighted just some of the most aggressive ones:

Here are some of the demands: pic.twitter.com/bbf33PoCFR

2/ "Dalton has… actively encouraged the sort of thinking that is now biting them in the ass. And the obvious irony is that if Dalton is 'systemically racist,' a belief they themselves promote, it is progressives who bear the responsibility." https://t.co/6NwN1YgOBU

The easy way to see this stunt is as yet another case of “wokeness gone wild,” which is how it’s being covered in the New York Post and Daily Mail. And it certainly is that. But it’s also more: Demands like this are a financial shakedown, and they will continue until institutions label them for what they are and start fighting back, or collapse under the strain.

America is flooded with thousands of people, many of them nominally “college-educated,” who are skilled in nothing except left-wing activism and professional grievance-mongering. These people generate no value to any institution they are a part of. They lack skills, and are often unwilling to learn them. In any merit-based system, they will sit at the bottom of any hierarchy.

But what this class possesses is political power. They are the bedrock of the left’s political power, and command the sympathies of those in power. And so, like bureaucratic pirates, they demand money and status from established institutions, and threaten them with ruin if they don’t receive it.

That explains the situation at Dalton. Dalton is wealthy, well-funded, and earnestly progressive. The idea that the school is “institutionally racist” against blacks is ludicrous. The reality is the exact opposite. Non-white students and staff are patronized and coddled. Now, they are trying to cash in on that coddling.

The 12 full-time diversity staffers, plus the full-time staffer whose only job is helping black students file claims of racism, would give a ratio of less than one hundred students for every diversity grifter. Even one “diversity officer” is a complete waste, but thirteen is pornographic excess. These staffers will do nothing but conjure more fake racism into existence, to justify the paychecks they will receive for doing no real work.

Almost every demand on the list offers an opportunity for activists to get money. Yearly “anti-racist training” will require bringing in all manner of consultants. Coverage of student loans will wipe out the burden of otherwise useless college degrees. Mandatory diversity statements from all job applicants will make affirmative action easier than ever to implement.

In fact, the list of demands makes it plain that Dalton isn’t even supposed to be a school in the traditional sense. Instead, it’s supposed be an elaborate scheme for funneling money to individuals from the left’s preferred groups. One demand on the list even calls for releasing staff members from teaching duties if they use their time to work with “black-led community organizations.” In other words, they want Dalton’s parents to bankroll Barack Obama-style community organizing, while teaching goes ignored.

On one hand, it would appear that Dalton does its students a disservice to prioritize racial grievance politics over traditional learning. From the standpoint of intellectual and cultural enrichment this is certainly the case. In terms of preparing students to succeed in contemporary American economy, Dalton may actually be offering its students a much needed crash course. A lack of sensitivity to and inability to navigate racial grievance politics is far more damaging to one’s employment prospects  in corporate America than mere incompetence.

What better education for Dalton’s budding blue-chip CEOs than a real-life example of how an elite institution goes about negotiating with racial grievance stakeholders in a way that handles PR, minimizes damage to the institution, and preserves the political coalition between the ruling class and their minority clients? What better education for Dalton’s future politicians, strategists and organizers than a close-up view of how to conduct a proper racial shakedown, without stepping so far out of line that you actually pose a threat and get crushed?

Like it or not, the absurdities and corruption of racial grievance politics are by now inextricably embedded into America’s corporate and legal system.

Dalton de-legitimizes itself with such absurdity in the same manner as most every other ruling class institution in the country. In keeping pace with this de-legitimization, Dalton is actually preparing its students as future members of the ruling class to operate within America’s anemic, corrupt, dysfunctional and illegitimate institutions. In this perverse sense, we must give Dalton some credit for preparing it’s students for the “real world.”

AS per higher-ed boot camps, let’s just admit that Cornell U is representative of the rot within — again, aside from a few outliers!!

HERE we go….down, down, down the rabbit hole! 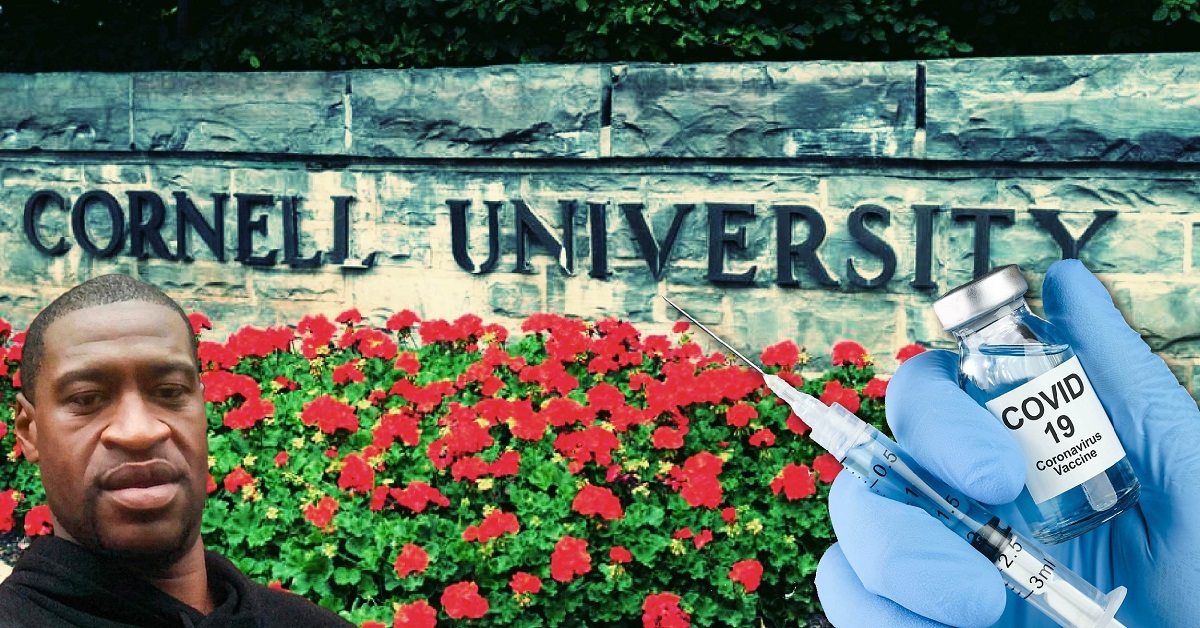 Cornell Just Made The COVID Vaccine All About “Race”