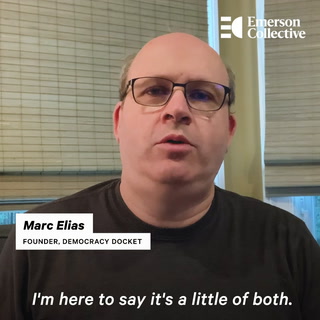 IF one tries to conjure up the facsimile of a “gun-for-hire” — by definition, one who operates sans any ethical and moral constraints — in the legal field, more specifically, political law, few “measure” up to Marc Elias, the go-to Demster!

AN adept, ethically-challenged, mega high-priced lawyer, is it any wonder that he is the top choice of the Demsters — where NO line is too illegal to cross, and where “dark money” is endless and hardly a factor of concern? Rhetorical.

SO much so, a mere ten days ago, he was featured in a scathing expose’ —  one which only the worst of the worst are granted such full-on treatment. A “super-star”, of sorts.

TO wit, the bottom line is this: If anyone is “worthy” of arrest under the provisions outlined within the following EXECUTIVE ORDER, the aforementioned Demster, the left’s “legal” hatchet man, stands atop the increasingly notorious heap!

Executive Order on Imposing Certain Sanctions in the Event of Foreign Interference in a United States Election – TAILOR-MADE FOR “THE STEAL!” [EXPLANATORY VIDEO]

IN this regard, let’s cut to the chase, after all, there is no time to lose! As such, patriots must familiarize themselves with those who have enabled “the steal”  — despite their legal veneer, and whether they are elected officials or non-elected facilitators.

Marc Elias, the Democrat lawyer behind the Russia “dossier” in 2016, and a slew of lawsuits to expand vote-by-mail in the 2020 presidential election, is involved in seven lawsuits regarding the rules for the Georgia Senate runoff to be held Jan. 5.

Elias’s website, Democracy Docket, is a clearinghouse of information for fellow Democrats on current election litigation around the country. He lists five cases of interest in the runoff, which pits incumbent Republican Sens. David Perdue and Kelly Loeffler against Democratic challengers Jon Ossoff and Raphael Warnock, respectively:

Elias is among the plaintiff’s attorneys in the latter four cases. He represents Democrats in motions to intervene in the first three.

The Washington Post identified Elias in 2017 as the lawyer who paid Fusion GPS to compile the fraudulent Russia “dossier” on then-candidate Donald Trump on behalf of the Democratic National Committee and the Hillary Clinton campaign.

Elias casts his role as an attorney as defending voters’ rights, but he often pushes for vote tallies to be overruled when it would serve Democrats’ interests. On Wednesday, Sen. Rick Scott (R-FL) recalled in a Senate Homeland Security and Governmental Affairs Committee hearing how Elias had tried to steal his 2018 Senate race through the courts, despite the verdict of the voters.

Currently, Elias is trying to overturn the results of a congressional race in Iowa’s 2nd district that Republican Marianette Miller-Meeks has won by six votes over Democrat Rita Hart. Elias plans to appeal to House Democrats to refuse to seat Meeks, using their majority and their discretion through the Federal Contested Elections Act.