Before seguing to FOX’s fox in the hen-house — no pun intended, seriously — it is more than instructive to listen to what Joe Biden, in his own words, admitted to and bragged about. Incontestably, the following is coming straight from the horse’s mouth, so to speak. As such, pay heed to the brief video, while he crows about having “the most extensive and inclusive VOTER FRAUD organization” in history! Imagine that. Now, why would he do that, even considering that he is, more often than not, addled to a grave extreme? Rhetorical.

Well, when one knows that the “fix is in”, all manner of truths spill forth — mentally confused or not. Indeed, much of Biden’s — and the rest of the DemocRAT Mafia’s — confidence emanates from the pre-determined outcome via the HAMMER’s SCORECARD, that’s the wherefore and the why-fore. Effectively, regardless of the hues and cries from this corner and that corner, it is their belief that nothing will make a dent. Time will tell.

To wit, it is with the above arrogant assurance in mind that Arnon Mishkin, FOX’s Democrat operative at the Election Desk, smugly pulled the trigger for a Biden Presidency. Hmm. 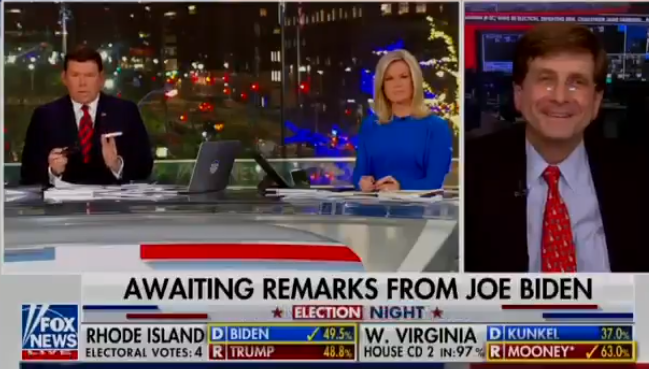 Full Disclosure: This investigative journalist (akin to many others) has more than a few ears to the ground; one of which is deep inside FOX News in NYC (for many years, this journalist’s professional stomping grounds), housed at 1211 Avenue of the Americas.

In this regard, for several years, said source kept alerting to the behind-the- scenes, non-conservative hidden-based goings on at the station, despite its foursome of patriotic superstars, namely, Tucker Carlson, Sean Hannity, Lou Dobbs and Laura Ingraham. Take a bow. And while their insights are of much import, this source insisted: none of the aforementioned have the clout that the ‘Data Guy’, akin to the ‘Wizard of Oz’, possesses. How right he was! So, the moment that Mishkin ‘magically’ appeared before the cameras on November 3 at 10:12 PM — and before anyone knew what hit them — this writer understood what was going down – akin to a ton of bricks falling off a runaway freight train! Mind you, no sooner did it happen that the phone blew up at this end.

Even so, while it has been a non-stop effort at this end — with a few hours set aside for ‘play time’ — to inform the public as to what’s what, well, the source contacted again and said: Adina, it is high time to blow up Mishkin’s handiwork on behalf of his Democrat handlers!

Now, not one to rework the wheel, as is said, the following is offered up as a carefully analyzed and judicious adjunct to the above and more.

NOTE: Beforehand, please observe Mishkin’s gleeful smirk and overall jovial demeanor when he calls it — again, more than prematurely — for Biden. Not for nothing….

Lovers of liberty, one and all: Please listen to the nauseatingly fawning, groupie-like congrats going on at FOX, that is, over the newly anointed duo: All hail to Sleepy/Crooked/Creepy Joe & Cammie-the-Commie! Inexorably, a death keel to the once venerable station. R I P!

Fox News is one of few major news networks in the United States that has called Arizona for Democratic presidential nominee Joe Biden, despite the numbers showing it too close to call. Fox, which has long been considered to be fairer to Republicans than the likes of CNN and MSNBC, called the race early in the night and could allow Joe Biden to claim victory if he wins in Nevada.

The decision, which was not supported even by far-left news network CNN, was slammed by the Republican Party on election night and in the days following.

On Thursday, the Trump campaign released a statement explaining how the decision to call Arizona was made by a Democrat-voting election desk operator at the network. Arnon Mishkin “prematurely called Arizona for Joe Biden before hundreds of thousands of ballots had been counted,” the statement reads.

“Even left-leaning election analysts like Nate Silver have criticized the decision, but Mishkin is standing by his terrible decision despite and refusing to retract his unjustified call,” the statement continued.

The campaign then asked why Mishkin would put his finger on the scale for Joe Biden before so many votes were counted…and offered a likely explanation.

“Mishkin is a registered Democrat who voted for Hillary Clinton in 2016, worked as a Democrat political consultant, and has a long record of donating to Democrats, including the 2008 Obama-Biden campaign,” they said.

“As the votes are counted, President Trump continues to cut into Joe Biden’s lead in Arizona,” the statement continued. “Five major election decision organizations have refused to follow Mishkin’s lead and call the race in Arizona, because they know what the Arizona Republic knows: ‘Trump received almost the exact share he would need to charge back to win Arizona’s 11 electoral votes and potentially reelection.’”

It means that Democrats could potentially use the Fox call to claim victory, despite the very real possibility that President Donald Trump could catch up and overtake Biden in the final counts in the state of Arizona.

2 thoughts on “The ‘Wizard of Oz’ at FOX News Revealed: Arnon Mishkin, Democrat Operative aka ‘The Data Guy’, at the Election Desk Called Arizona – Why Did He Jump the Gun? [VIDEO EVIDENCE] By Adina Kutnicki”