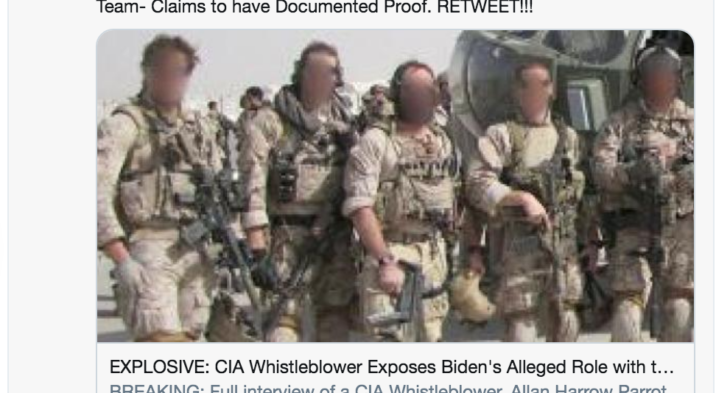 Whereas many Americans (westerners, in general) are afflicted with ADD, that is, when it comes to yesterday’s crimes perpetrated by deep state political operatives, some of us are not so forgetful. Forgiving.

In this regard, this investigative journalist wrote several exposés, in relation to the purposeful “shoot-down” of SEAL TEAM SIX, August 6, 2011. Mind you, it may have been 9 years ago, but it’s not 100 years and counting!

SEAL TEAM 6/Extortion 17: Sacrificial Lambs On Behalf Of Obama Inc. The Bin Laden “Kill”. Why Were They Set Up ? Commentary By Adina Kutnicki

Obama, Clinton, Biden and Brennan Will “Hang For Treason” When This Evidence Comes Out… BOMBSHELL Recordings Prove They Had Seal Team Six EXECUTED To Cover Up Deep State Crimes [VIDEO EVIDENCE]

This story is rapidly unfolding and looks to be one of the most damning indictments of the deep state in modern U.S. history. According to numerous firsthand sources and witnesses, a treasure trove of audio, video and photographic evidence exists that reveals Obama, Clinton, Brennan and Biden to be complicit in outright treason against America.

According to multiple reports, these traitors ran a multi-billion dollar payoff and bribery operation with Iran, staged the fake killing of Osama Bin Laden, then had the entire Seal Team Six that carried out the Bin Laden raid executed in a staged accident to cover up their own crimes.

The evidence exposing all this has already been forwarded to multiple independent news organizations as well as a sitting U.S. Congressman, say firsthand sources.

This story exploded onto the scene following a bombshell presentation by Charles Woods and Nick Noe at AMPfest. User “harrier808” has been posting the relevant videos to Brighteon.com, the independent, uncensored free speech video platform, so you can watch the full presentation here:

One of the firsthand sources who was part of the US military command and control infrastructure and witnessed these events going down in real time, has also been interviewed by Anna Kait, at AMPfest. Here’s his jaw-dropping story of what’s about to come out and why Clinton, Obama, Biden and Brennan will “hang for treason” once the full facts are known:

In addition, Gary Franchi from Next News Network has covered some of the developing story in this eye-opening video news report:

A Twitter thread that claims to link to two audio recordings that are part of this emerging evidence is found at the following link:
https://threadreaderapp.com/thread/1316016099389915137.html

Note to the deep state: We are not in possession of any of the evidence mentioned in these videos. And from what we’ve heard, it’s already too late to stop this evidence from going viral across the ‘net anyway. Once other sources release this evidence, we will cover the breaking news and link to the audio, video and photos as they go public.

It’s time to put these criminals behind bars!

3 thoughts on “Obama, Clinton, Biden and Brennan Will “Hang For Treason” When This Evidence Comes Out… BOMBSHELL Recordings Prove They Had Seal Team Six EXECUTED To Cover Up Deep State Crimes [VIDEO EVIDENCE] By Adina Kutnicki”