INTRODUCTION BY ADINA KUTNICKI: There is NO other law enforcement agency in the entire nation which recognizes, understands, and has its fingers on the pulse of terrorism at-large — be it green/Islamic, or red/Marxist/socialist/communist via its many moving and fluid parts — akin to the NYPD’s Counterterrorism Bureau (CT). They live and breathe it. Period.

Now, this is not a bold assertion borne out of thin air and so-called smack-talk. Not at all. Rather, it comes from long-standing professional experience and a personal association thereof — the former as a (somewhat) knock-on effect from the latter. As such, an edifying read (among countless others attesting to the same) commences with Terrorist Cop. Extrapolate from there.

But not to be lost in this most explosive discussion, it goes without saying — at least to those who have not been in a coma — that Bill De Blasio is a cop-hater and is more in line with Marxist revolutionaries than with  average American citizens. Of this, let there be NO doubt. Ipso facto, without removing him from office — forcibly, if necessary — the NYPD will remain castrated and unable to take care of business, that is, with their hands-in-their-pockets, as dictated by their real boss, the Comrade Mayor.

Now we have the full story: this police officer unholstered his weapon only after his supervisor was nearly killed with a brick. #FactsMatter 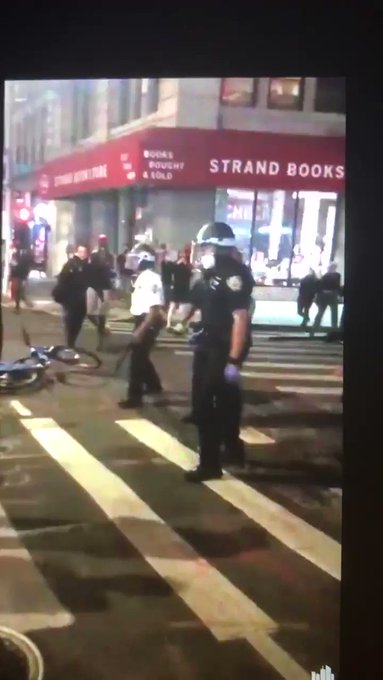 (Click on to view what really went down, despite De Blasio’s jive-talk and incendiary attack on the officer!)

Not only that, relying on the FBI and its highly compromised and infiltrated — red and green alike — terrorism bureau is a recipe for untold disaster. The reasons are manifest and manifold. Suffice to attest that the running indictment starts here.

Adding the proper fuel to stamp out the national fire, American patriots must ignore the self-serving jibber-jabber spewing from (most of) the so-called leadership, as well as from the media-inciting mob. In reality, they are talking bobble-heads and completely removed from any standards of objective journalism. So much so, they are, in effect, little more than whores; bought and paid for by various players inside and outside officialdom. Simple as that. Beyond the pale.

As to the objective facts at hand re violence by police against blacks, the real statistics (from 2019) bear out an incontrovertible and uncomfortable truth — for those who are hell-bent on burning down the country, having nothing to do with “justice” for Floyd’s (or another’s) death. So, listen up:

All of which brings us straight back to the NYPD Counterterrorism Bureau and their spot-on, highly-informed, targeted analysis, as to what is really going down. CT school is in session…..no pussyfooting allowed!]

Anarchist groups from outside New York City used the death of George Floyd and the protests it sparked as cover to plan and carry out violent acts in the city, the New York Police Department’s terrorism commissioner said.

There is a high level of confidence within the NYPD that the anarchist groups organized scouts, medics, and supply routes of rocks, bottles and accelerants for breakaway groups to commit vandalism and violence, NYPD Deputy Commissioner for Intelligence and Counterterrorism John Miller said, according to New York’s NBC 4.

There are strong indicators the anarchists planned for violence in advance using at times encrypted communications, Miller said.

“Before the protests began, organizers of certain anarchists groups set out to raise bail money and people who would be responsible to be raising bail money, they set out to recruit medics and medical teams with gear to deploy in anticipation of violent interactions with police,” Miller said.

Miller said the anarchists “developed a complex network of bicycle scouts to move ahead of demonstrators in different directions of where police were and where police were not for purposes of being able to direct groups from the larger group to places where they could commit acts of vandalism including the torching of police vehicles and Molotov cocktails where they thought officers would not be.”

Samantha Shader, 27, of Catskill in upstate New York, was accused of throwing a Molotov cocktail at an NYPD vehicle that was occupied by four police officers. When she was being cuffed, federal prosecutors say that she bit one of the officer’s leg.

According to charging documents, Shader allegedly threw a Molotov cocktail at 1:12 a.m. in Brooklyn Saturday morning. The FBI says it shattered two windows of the NYPD vehicle and damaged the vehicle while officers were inside. The complaint alleges that the FBI was able to get video of the incident from a witness.

Prosecutors say that Shader “has traveled the country committing various crimes, which include acts of violence and resisting arrest” including a 2019 officer interference conviction in Waterford, Connecticut.

Antifa, one of the most visible and violent anarchist groups in the U.S., has been blamed by several officials for much of the violence taking place since this month’s riots began.

President Donald Trump has said he will declare Antifa a terrorist organization.

“It’s ANTIFA and the Radical Left. Don’t lay the blame on others!” Trump tweeted.

“The continued violence and destruction of property endangers the lives and livelihoods of others, and interferes with the rights of peaceful protestors, as well as all other citizens… The violence instigated and carried out by Antifa and other similar groups in connection with the rioting is domestic terrorism and will be treated accordingly,” Barr said.

Washington Times reporter Rowan Scarborough noted on June 1 that the “prime goal of far-left Antifa is to rid America of ‘whiteness’ as a race, according to a handbook written by a historian who helped organize the anarchist ‘Occupy Wall Street’ movement in 2011.”

Anti-capitalist author Mark Bray rejects “exterminating” whites. Instead, he proposes to remove it as a race and thus terminate its high standing while creating a “classless society” that would naturally do away with crime.

“This does not mean exterminating people who are currently categorized as white, but abolishing the classificatory scheme that renders them so,” he writes in the 2017 “Antifa: The Anti-Fascist Handbook.”

In 2018, Minnesota Attorney General Keith Ellison posted a photo of himself online holding and endorsing the “Anti-Fascist Handbook.” His son said he is a proud Antifa backer.

Portland-based independent journalist Andy Ngo has perhaps most extensively documented attacks by self-described Antifa members in recent years. Last June, Ngo himself was attacked by Antifa while covering their confrontation with the far-right Proud Boys group, and suffered a brain injury.

Ngo told Fox News that Trump’s efforts to consider Antifa a terror group “will provide a framework for local authorities and, especially, federal authorities to start investigating this criminal cartel for the street thugs that they are.”

“In addition to the street hooliganism that we see over and over on the streets of America, this movement also has a political ideology that is agitating for a violent political revolution,” Ngo added.

Left-wing academics, meanwhile, “have defended Antifa,” Fox News noted. Ruth Ben-Ghiat, a professor of history at New York University, told The New York Times that Antifa’s tactics of physically assaulting political opponents tend to attract negative press only because the right-wing media is being very unfair about it.

Reports and social media posts over the weekend chronicled some of the violent acts allegedly carried out by anarchists who have hijacked the George Floyd protest movement.

• In Richmond, Police Chief Will Smith said rioters set fire to an occupied multi-family residence with a child inside, then repeatedly blocked firefighters’ access to the scene. Police were eventually able to get to the residence and clear the way for firefighters to rescue the family.
• In North Carolina, the editor of a progressive newspaper, who only hours prior had celebrated the protests-turned-riots, had to take cover from looters and vandals in the basement of Indy Week after they had broken into the newspaper’s offices.

To make matters even more incendiary, there is much evidence as to Congress’s tie-ins to ANTIFA, and their support thereof. Yes, “AOC” is full throttle as a leader for the revolutionary charge, as evidenced here. Imagine that.

But there’s more. Much more.

What do you think happened when a reporter asked a pointed investigative question, mind you, like they are supposed to?

This week, patriots everywhere collectively cheered the announcement from President Donald Trump that the radical, far-left group Antifa would be designated as a domestic terrorist group.

This is an excellent move on the part of Trump.

Ever since he was running for office, the ironically incredibly fascist “Antifa,” which is supposed to mean “antifascist,” has been raging their own little civil war against peace, justice, and the American way.

They openly and unapologetically denounce the rule of law in this nation and justify their violence in the name of “combating hate.”

That’s right–their philosophy is that you can use violence to combat “hate speech” because they claim that “hate speech is violence.”

Now, not only is that absolutely insane and completely morally baseless, but it also makes one wonder as to why Antifa justifies destroying private businesses in the name of George Floyd.

What did Starbucks, Target, or black-owned businesses in Minneapolis ever do to Floyd, one wonders?

Anyway, Trump’s designation that Antifda is, indeed, a terrorist group will allow the federal government to use the full weight of its intelligence and law enforcement resources to investigate and charge Antifa criminals for their crimes.

Hamas is in good company.

Will the White House investigate members of Congress who are funding or tied to Anfifa?

Chanel Rion: Kayleigh, is it possible that DC will be placed under Martial Law in order to protect these national monuments from further destruction? And second under the Civil Rights Act of 1968 will this administration investigate either members of Congress or political organizations who are funding or who are tied to the Antifa movement?

——————————————————————————————————————–
To reiterate: While most of the media-inciting mob are in the tank for ANTIFA and its appendages ala the full-on destruction of America, there are a handful —aside from Chanel Rion, Tucker Carlson, Sean Hannity, Dan Bongino, Laura Ingraham, and Jeanine Pirro — who aren’t. Yes, a paltry few.
Here is Pete Hegseth, a FOX News contributor:
Pete Hegseth
Why is the daughter of Minnesota’s Governor (@GovTimWalz) sharing information about National Guard movements & capabilities to Minneapolis “protestors”? https://twitter.com/hope_walz/status/1265874998411112449 …

The activists were encouraged to steal “kit”, or the weapons and body armor used by the soldiers.

The officials were not authorized to discuss the matter publicly and spoke on condition of anonymity, reports one outlet.

Resultant, is there even a scintilla of a doubt that ANTIFA (and its offshoots) is a domestic terror organization, thus, presenting a clear and present danger to America in toto?